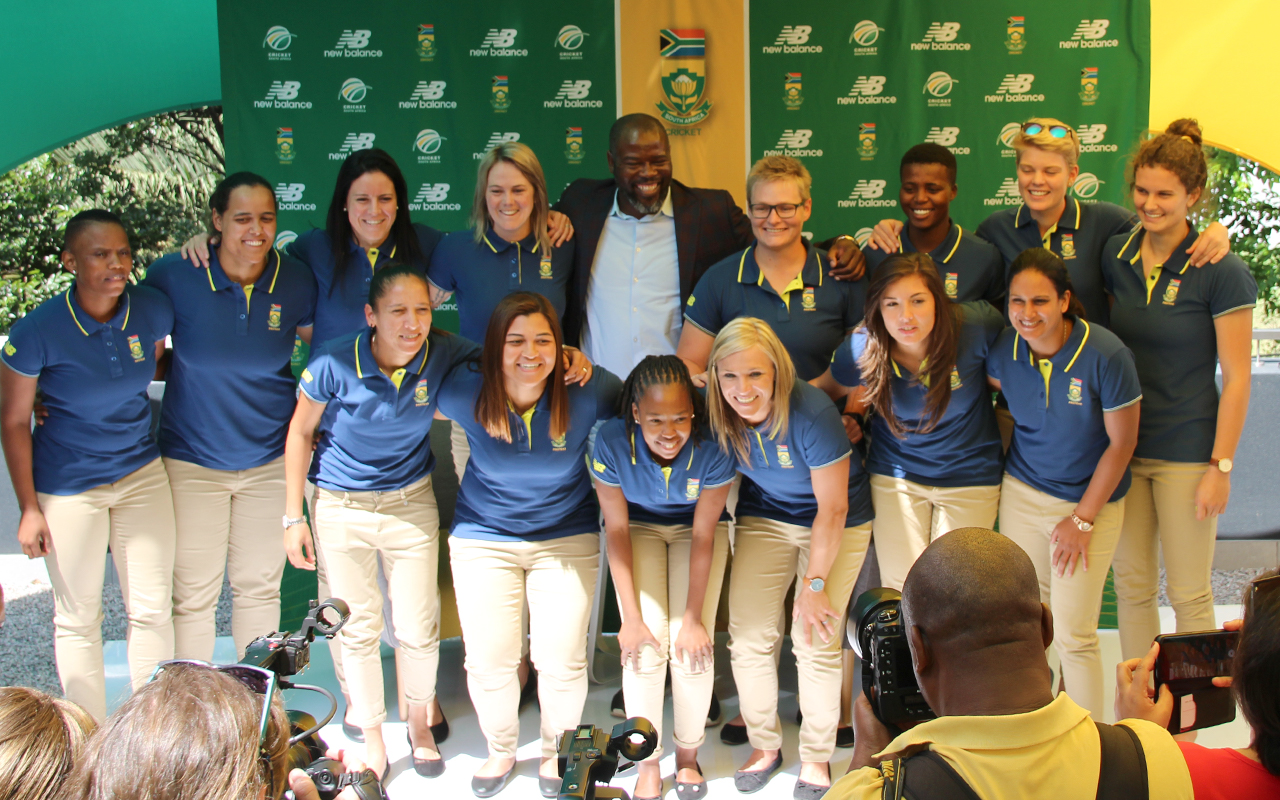 Cricket South Africa treated the nation’s top cricketers to a rousing farewell at their corporate headquarters in Illovo, Johannesburg on Tuesday, as the team prepares to take on defending champions West Indies, England, Sri Lanka and Bangladesh in Group A of the ICC World T20 in St Lucia.

Greeted on arrival by a flashmob of young girl supporters enthusiastically waving the national flag, a guard of honour by a local schoolgirl cricket team, all to the balmy sounds a a marimba band, it was a rockstar-level recognition usually reserved for the team’s men’s counterparts.

“I’ve always stuck my neck out for you guys, and I’ll continue to do so,” said CSA Chief Executive Thabang Moroe. “As your number-one cheerleader, self-proclaimed, you know how much I believe in you guys.

“You’ve already done me proud, having come as far as you’ve come, in terms of your individual performances, and in your performances as a team.

“Overwhelming!” exclaimed Proteas Women captain Dané van Niekerk, saying: “We’re not used to massive crowds, coming to our home, seeing so many people so excited, I can’t quite shake the feeling as yet.”

The selectors have kept the bulk of the squad that recently completed a tour of the Windies with the return of stalwarts Shabnim Ismail and Trisha Chetty to finish off the dangerous-looking squad.

The squad of 15 will represent South Africa in the first ever stand-alone ICC Women’s World T20 taking place in the West Indies from 9-24 November 2018.

Injury has unfortunately shut the door to Ayabonga Khaka, who was not considered for selection, while three of the newest members of the team, Tumi Sekhukhune, Robyn Searle and Saarah Smith, will make their World Cup debuts.

Focussing on the tournament, newly-returned fast bowler Shabnim Ismail was upbeat about the form of the SA attack: “We just need one or two players to stand up every game, and definitely we’ll end up bringing the world cup home.

“Alongside myself and Marizane Kapp, you can’t get a better opening bowling pair, and with wicketkeeper/batter Trisha Chetty coming back, and Lizelle Lee as an opening batter, it’s just for us to go out there and get the wold cup.”

Ismail’s newcomer bowling colleague Zintle Mali was excited coming in as an unknown quantity: “I’m excited to give them what they don’t expect of me,” the bowler explained. “They don’t know what I’ve been working on, I’ve been working undercover.”

“I am excited,” the right-arm medium pacer continued, “Knowing that the whole world will be watching, and that everyone here at home will be giving their support, I’m excited to give them a great performance!”

It will be a doubly exciting tournament with the Decision Review System (DRS) being used in an ICC World T20 for the very first time.

Group B comprises Australia, India, New Zealand, Pakistan and Ireland, and the sixth edition of the ten-team tournament will take place across three venues – Antigua, Saint Lucia and Guyana.

Photo 1 caption: Cricket SA gave the Proteas Women a rousing farewell on their way to the Caribbean to take on defending champions West Indies, England, Sri Lanka and Bangladesh in Group A of the ICC World T20 in St Lucia, starting 13 November. Photo: gsport

Photo 2 caption: CSA Chief Executive Thabang Moroe has appointed him as the team’s chief supporter, and has pledged the federation’s full backing for the team’s every requirement, as they look to make SA proud. Photo: gsport

Photo 3 caption: Proteas skipper Dané van Niekerk was blown away by the first-class display of support by Cricket South Africa at their swanky farewell. Photo: CSA

Photo 5 caption: Right-arm medium pacer Zintle Mali fancies herself as an unknown quality in the SA armoury, and is looking forward to the opportunity to make a great impression on the domestic cricketing supporter base. Photo: CSA