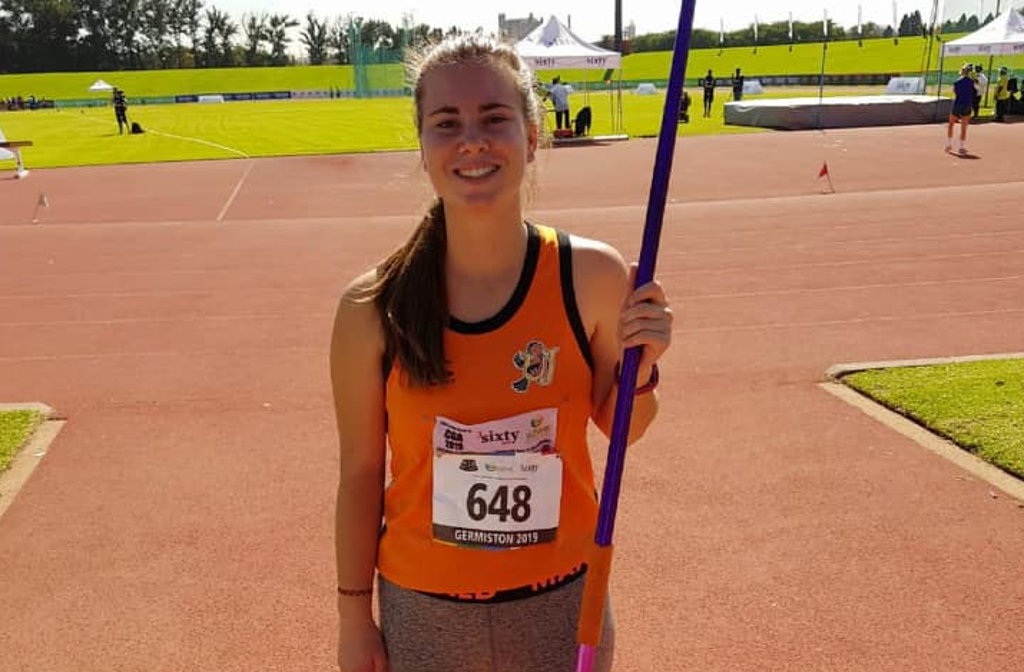 University of Johannesburg student-athlete Yane van der Merwe continued to shine in her young career when she set a new U20 javelin record at the South African Athletics Championships in Germiston last month.

The 19-year-old para field athlete competes in the F44 class and threw the javelin a distance of 26.56 metres to claim the gold medal.

She added a bronze in the shot put mixed competition and is now looking forward to competing in the World Para Athletics Junior Championships in Switzerland from August 1 to 4.

Born with a club foot which severely limits her movement, Van der Merwe grew up in Trichardt in Mpumalanga but now lives on campus in Auckland Park. She is in her first year of a BA sports development degree.

Her interest in athletics was sparked by a conversation with a friend, with whom she trained.

“After she told my mother and me about it, we did some research and I began competing in para athletics towards the end of 2016,” said Van der Merwe.

“The class F44 means that you have a joint below the knee that does not function properly.

“For me it is my right ankle as I have only a minimum degree of function, meaning I cannot move my ankle in any way.”

She immediately revealed her potential by winning the U18 girls javelin event at the national champs in Port Elizabeth in 2017 and since then has gone on to win a string of medals.

The highlight of her career, she said, came at the International Wheelchair and Amputee Sports Federation World Games in 2017 in Portugal.

“I came home with a gold medal for javelin and a bronze medal for shot put, so that has been my biggest achievement so far.”

This year she has confirmed her standing in South African athletics, winning gold medals at the SA championships for the physically disabled in the javelin, shot put and discus events in Stellenbosch.

In the world para athletics rankings, Van der Merwe is ranked second in the javelin, third in the shot put and fifth in the discus.

She said breaking the national record was not expected.

“I was really surprised when I broke my javelin record of last year after not throwing such a good distance at the champs, earlier this year in Stellenbosch.

“I was actually going for the discus record, especially after I just missed it last year.”

While she is proficient in three events, Van der Merwe said the javelin was her favourite.

“I have been competing in javelin since I was 12 years old in Grade 6. I competed at school level against able-bodied competitors.”

She added that she had been blessed with a significant support group.

“My family and friends, with all the support and love from their side, have been very important, while UJ have given me the opportunity to follow my dreams.”

She said she was now focused on trying to qualify for the World Para Championships in Dubai in November, as well as next year’s Olympic Games in Tokyo.