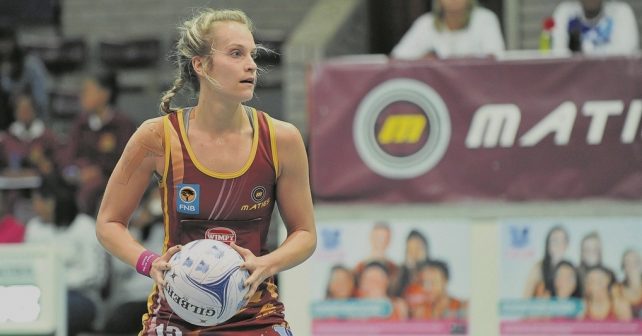 It is such a privilege to be here tonight. About two weeks ago Karen phoned me and asked if I would be available to do this- and I obviously immediately confirmed. It is really an honour to stand in front of a crowd of beautiful, hardworking, talented and educated ladies.

Firstly I would like to compliment all the teams on their performances. I’ve been watching the games and it’s so wonderful to see how this tournament has grown and evolved into a platform that gives players the opportunity to not just play the game that we love so much, but also to show others, especially youngsters, that you can do what you love while studying.

I represented Maties for six years, and had the honour to represent them in three Varsity Netball tournaments. I was there when this league started – and now I really do sound very old. But the point that I am trying to get to is the this.

While watching you girls play, I saw the following:

Good feeds, amazing intercepts, a lot of good shots, great pressure on the ball, some brilliant set plays, and so I can go on and on.

And this will obviously be clear to see because you are high performance athletes – you train hard, you gym, you do these drills and set plays over and over and over again. I’ve been there. And when we get out on court, and you can actually implement this in a match, you feel successful. Like it was all worth it. All the hours and hours of sweat, suddenly fades away.

This is what most people see, and expect of you.

“But there is so much more to this game if you look closely. When Chantelle misses the shot, Ine-Mari has her back by getting the rebound. In life, you’re going to miss some shots. Make sure you rebound.

Great feed by Charmaine into the circle.

You’re going to miss 100% of the opportunities you don’t take.

Spectacular intercept by Jodie outside the shooting circle.

Life begins outside your comfort zone.

Pressure on the pass by Rambo.

Diamonds can’t be formed without pressure.

Recently I’ve been confronted with people asking me: Why do you play netball? It’s not like you can make a living out of it?

You see, this is what most people don’t get. We don’t play netball for the money, the fame or the glory. We play netball to learn, to showcase our talents, to give all glory to God for blessing us way above what we deserve, to inspire, to motivate and to send out the message that you are good enough, and that everything is possible if you work hard, and believe in yourself.

We all have people in which we saw something more than just netball. And believe it or not, that is you, now.

Somewhere there is a little girl, sitting in front of a TV, or in a stand, wishing and praying to the Man above, that one day, she can be you.

A Stephanie Brandt who is a killer at taking intercepts outside her comfort zone.

A Sigi Burger that does not miss a shot.

A versatile Tshina Mdau that can play both attack and defence brilliantly.

A Carla Werth that can literally run her lines in 2 seconds.

A Megan, a Kacey, a Monique and a Romé who just got selected for the Proteas, showing that if you work hard, dreams really do come true.

Always remember the power you have, and choose wisely how you use it. Always respect the game, not for what it gives, but for what we can learn from it.

“In conclusion, I would like to thank Varsity Sports on behalf of all of these players, for the following:

Giving us the opportunity to do what we love.

Creating a platform where talent can be identified.

And showing the world out there, that this is a powerful game.

Because despite the colour we show, the position I own, or the team I lead, we are all here for the same reason –

TO DO WHAT WE LOVE AND TO INSPIRE.”

I leave you with the following powerful words by Serena Williams:

“The success of every woman should be the inspiration to another. We should raise each other up. Make sure you’re very courageous: Be strong, be extremely kind, and above all, be humble.”

Good luck with all the remaining matches.

I know I should probably say “May the best team win” but I could just as well say, “May Maties win.”