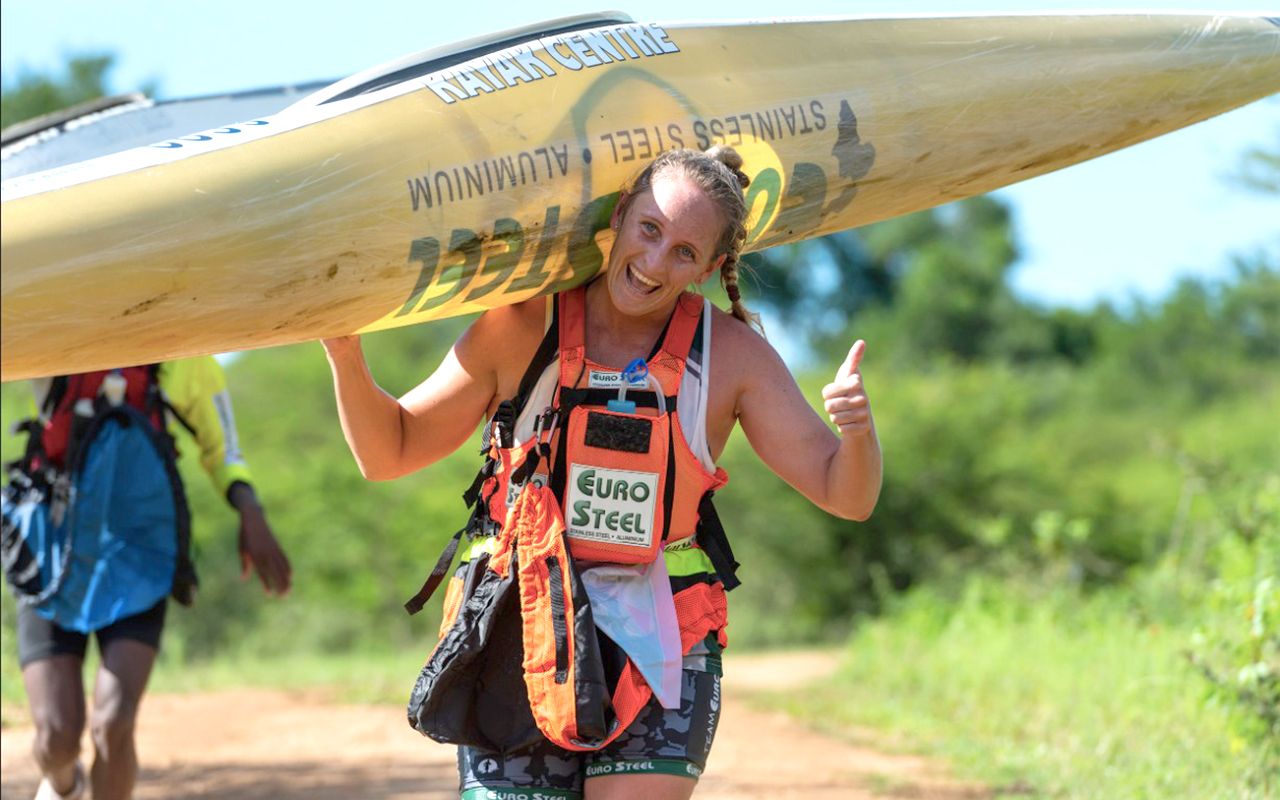 MyLife Dusi Canoe Marathon title contender, Jenna Ward has found herself in an unexpected race against time as she rehabilitates an ankle injury picked in a key Dusi seeding race last month.

Ward was racing through the notorious Devils Cauldron on the Guinea Fowl portage during the recent Campbell’s Farm to Dusi Bridge seeding race when she rolled her right ankle jumping off an erosion step in the steep dip.

“I heard it click and I went down,” recalls Ward. “I was heartbroken and had to do some quick, clear-headed analysis. There would have been no point in worsening it by running on it, so I took the decision with my seconds to stop right there.

“Dusi has to be the priority. I was so looking forward to racing races like the 50 Miler the next day, but instead it was off to hospital for X-rays and ultrasound then starting physio and working with the biokineticists.

“I have been getting great treatment and advice from them.” – Jenna Ward on receiving treatment for her ankle injury from the Elite Athlete Development Programme at Prime Human Performance Institute.

“Fortunately I am part of the Elite Athlete Development Programme at Prime Human Performance Institute, so I have been getting great treatment and advice from them,” said the Euro Steel team racer.

She hobbled down to the beach to race the Marine Series surfski race with her brother Jason, who also drove her down the full uMngeni River for the Kindo Inanda Dam to Durban Dusi qualifier race on Sunday, 28 February 2021,  and says her cautious approach to healing the ankle seems to be paying off.

“It was a grade one sprain, which is good news. I am now walking on it comfortably, and have taken the attitude that my approach to the Dusi will be different this year, but that it may well be a good thing.

“Lockdown forced me to look at my running, which may have been a weakness of mine on the Dusi, and I did a lot more work on my running.

“I am very strict about my training plans and it has been mentally hard to see the zeros in my training log in the running mileage column,” said Ward

“Now I might come into Dusi slightly under-trained, which could be a good thing.” – Ward speaks on her training going into the Dusi Canoe Marathon.

“In the build-up to the Dusi I tend to really go at my training hard, which always runs the risk of over-training. Now I might come into Dusi slightly under-trained, which could be a good thing,” said Ward.

Ward is taking a cautious approach to the final MyLife Dusi qualifier, the Lighthouse Designs Ozzie Gladwin on Sunday, and says she will be happy to get into a K2 with her brother again if she can’t race the other elite women in their singles.

“I am feeling really positive now and can’t wait for the Dusi. I am not afraid of going into it as an underdog!” she added.

The 2021 MyLife Dusi Canoe Marathon takes place from 18-20 March 2021. Entry details and more information can be found at www.dusi.co.za

Photo 1 Caption: Euro Steel’s Jenna Ward hopes to fully recover from an ankle injury suffered during a key MyLife Dusi qualifier race last month. “I am feeling really positive now and can’t wait for the Dusi. I am not afraid of going into it as an underdog!” she said. Photo: Anthony Grote/Gameplan Media