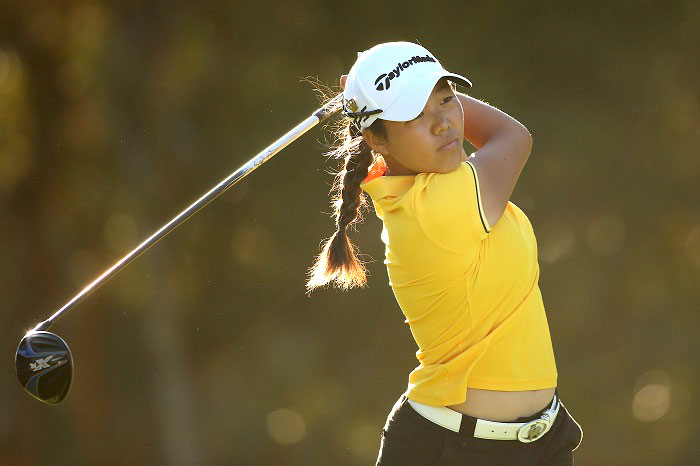 South Africa’s top ranked Woo-Ju Son firmed up her bid for Nomads SA Girls Championship title when she pulled clear of the pack with an eagle-birdie finish in the second round at Orkney Golf Club on Monday.

The 16-year-old Country Club Johannesburg junior was tied for the lead at one over with Chante van Zyl from Free State and Western Province’s Kaylah Williams, but it only took her nine holes to push clear of the opposition.

Son traded birdies at the first and fifth holes for bogeys at seven and eight. She birdied the 12th but dropped further shots at 14 and 16, however, an eagle at the par five 17th catapulted her to the top of the leaderboard.

A six-time winner this season, Son signed off in style with a birdie finish for a two-under-par 70 that propelled the number one ranked junior into pole position at one under 143.

She leads by three from Jenefer Haw from Ekurhuleni, who carded a 71.

Meanwhile South Africa’s number one senior Kajal Mistry made big strides after a disappointing 77 in round one. A second round 71 moved the reigning Sanlam SA Women’s Amateur Stroke Play champion to third on 148 and she is within five shots of Son.

Joint first round leaders Van Zyl and Williams dropped from contention, though.

Van Zyl returned a 77 to finish in fourth at six over, while former Ackerman Championship winner Williams registered a 78 to finish at seven over in a tie for fifth with Caitlyn Macnab from Ekurhuleni and Lindi Coetzee from Gauteng North, who were also among the big movers on day two.

Coetzee improved seven shots on a first round 79 and MacNab followed an expensive first round 80 with a one-under-par 71.

The B-Division contest ended in a two-way tie between Gauteng pair Marine Legentil and Kim Turgut on 25 over 169.

Legentil from Country Club Johannesburg shot 83 and Turgut from Jackal Creek 84 and they hold a two shot lead on Kaylin van der Merwe from Gauteng North and Border’s Ciara Koekemoer.

The 36-hole Stableford competitions in the C- and D-Divisions got underway on Monday.

Xavier Arries from King David Mowbray scored 39 points to lead the way in the C-Division for 19-25 handicaps. The Western Province junior has a one point lead over Gauteng North’s Jutta Tecklenburg, and she is two points clear of Lize-Mari Prinsloo from Southern Cape.

Thaakirah Bickoo also collected 39 points to lead the D-Division for handicaps 26 to 32. The Eastern Province junior finished one point clear of Chloe Buss from neighbouring Border and two points clear of Fouziah Schloss from Western Province.