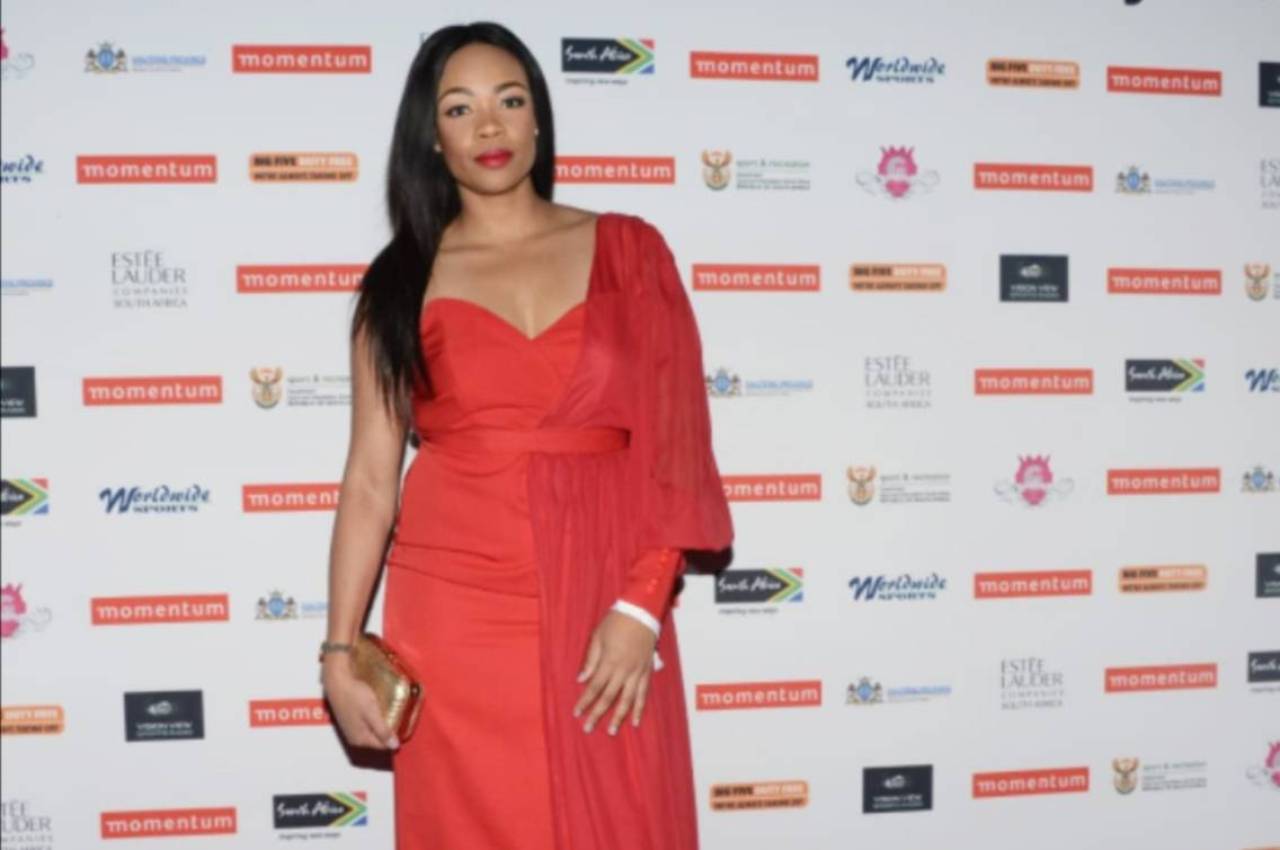 Former SPAR Proteas netball captain, Zanele Mdodana, is humbled as the gsport Trust have reappointed her as official spokesperson for the 15th edition of the prestigious awards ceremony.

Mdodana had a successful first year as spokesperson for the 2019 Momentum gsport Awards, and the team found it fitting to afford her the opportunity to represent the initiate and title sponsors, Momentum, for a consecutive year.

As a 2014 gsport Style Star award winner and champion of women’s sport, Mdodana’s belief of acknowledging and celebrating the successes of women in sport ties in with both gsport and Momentum’s vision.

With the no apology for my success trend which encouraged more women to confidently celebrate their work, Mdodana reveals that since her involvement with the awards, it has ignited a fire within her to acknowledge every stride.

Her personal life, work, team success, growth as a person and coach, have given her a solid foundation to work towards achieving her future goals.

Speaking with Celine Abrahams, Mdodana chats about Momentum’s involvement in supporting women in sport and the introduction of two new categories to include continental and global women in the awards.

Zanele, congratulations on your reappointment as the Momentum gsport Awards spokesperson! How much does this appointment mean to you?

Dear Celine, thank you very much! It’s an indescribable honour. I’m humbled. Blessed beyond measure. For the second consecutive year it says to me that I represented gsport and Momentum well last year.

Tell us about your experience of being a spokesperson last year and how you are hoping to use your voice this year?

Last year was my first year and first time being a spokesperson for any event or brand. Kass believes in me so much and gave me carte blanche I guess because she knows I love gsport, I am a loyal supporter. I believe wholeheartedly in what gsport is and stands for and what it seeks to do. It’s the answer for every woman in sport in SA. I’ve grown and got great guidance as to the role of a spokesperson.

What are your thoughts on Momentum being on board for the second year and how has their partnership with gsport enhanced the gsport Awards?

“I can’t thank Momentum enough; we know these are unprecedented times where sponsors across the board in sport are cutting costs. For Momentum to stay on board and back women in sport is a privilege.” – 2020 Momentum gsport Awards spokesperson, Zanele Mdodana

I can’t thank Momentum enough; we know these are unprecedented times where sponsors across the board in sport are cutting costs. For Momentum to stay on board and back women in sport is a privilege. It shows their commitment to women in sport and their belief in gsport and what gsport stands for. Thank you doesn’t seem to fully express our gratitude. But THANK YOU MOMENTUM! gsport is bigger and better, its recognised now not as some women in sport awards, it’s THE WOMEN IN SPORT AWARDS in SA!

Can you believe it’s the 15th edition? When was your first interaction with the gsport Awards platform?

Unreal how time has flown, I won the Style Star of the Year award in 2014 but knew about gsport way before then. Humble beginnings! You know that song that says, “Started from the bottom now we’re here?”, indeed, I feel Kass could have thrown in the white towel many years ago but she chose to persevere keeping not only her dream alive but every women in SA sports’ dream alive.

To be recognised and acknowledged for their sacrifice and hard work on and off the sports field.

Isn’t it special to have the first ever recipient of a gsport award, Penny Heyns, as official ambassador?

It’s brilliant! Penny Heyns is a legend like I will always remember her how she flew SA flag high in the pool. World stage. Worthy ambassador.

Your former coach and gsport Hall of Famer, Hazel Gumede, takes on a mentorship role on the campaign. Are you excited to be working with her again?

My heart when it comes to mama Hazel. She has stood the test of time. She is worthy of this honour. So excited! I love her and she loves me. I am her child. I come from her hands…her contribution to my career, wow.! This will give me an opportunity to thank her again.

How has your involvement with gsport played a part in your career and having the confidence to own your success?

The no apology for my success campaign ignited a fire in me that continues to burn. That you can be confident and tap yourself on the shoulder and say well done Zanele! It’s not arrogance, it’s confidence. I still walk tall, I have learnt to recognise and acknowledge the strides I make in my life, be it big or small…It’s progress.

In your own view, what impact have the awards had in encouraging women in sport?

It’s encouraged them to participate in sport and push their limits. To see how far they can go. Made them realise that in fact they are limitless. Nothing beats saying to an athlete, “Ahh, we as your country see you, see your sacrifice, your effort, see how well you are flying the SA on a global stage. THANK YOU!” That’s what gsport does for SA women in sport.

Why should the public play their part in the nominations process?

“To say we have a voice, that’s fair and the right way to involve us.” – Mdodana speaks on gsport giving the public a chance to play their part in the nominations process.

Integrity about all, we the public know the athletes, coaches, administrators, etc, we are impacted by them in whichever way. To say we have a voice, that’s fair and the right way to involve us.

What do you make of the introduction of the African and Global awards? Phenomenal. We are becoming inclusive, we are opening up and becoming leaders in Africa, I think this is the first of its kind I stand to be corrected.

Personally, you had an encouraging campaign last year with your success with the Maties Netball team and winning individual accolades. Take us through the last year since the 2019 Momentum gsport Awards.

Thank you! 2019 goes down in my books as the most humbling year. Personal life, work, team success, growth as a person and coach. Basically, it was the best year ever that Maties Netball has ever had. Knowing that there is so much more growth and room for improvement, I’m using 2019 as a solid foundation upon which my team and I are can build on.

From the lessons that you learnt, has it changed your focus on what you previously wanted to achieve?

No, it hasn’t, its rather encouraged me, knowing that impossible is nothing. There is no limit, also what has been encouraging for me is to see how my players lives have been positively impacted by 2019, they now believe that hard work does pay off.

What plans has the Covid-19 pandemic put on hold that you were eager to achieve this year?

Definitely sweeping clean all the netball cups available! What Covid-19 has done for me is to use the time being at home to work on myself, personally taking care of my physical health, mental health, self-introspection, having positive and honest conversations with myself, has been the best thing during this time.

What is your message to the youth this Youth Month?

It’s true when they say tomorrow is not guaranteed, that family love is the most important thing. Live everyday as though it’s your last… I say yes to love, laughter and being your best self every day. Take nothing for granted instead in all things give thanks. Gratitude for life!

What is the one advice that you have received that sparked a turning point in your career that you would like to share with other women in sport?

Not advice as such more like someone reminded me about the meaning of my name. Zanele means enough. Spend time taking in why your parents named you Zanele and live with that knowing that no matter what you are, you are enough, always was, is and will forever be enough!

How are you looking to use your story to inspire young sportswomen?

By sharing my story every chance I get. Letting them know that nothing worthy in life comes easy, work for what you want, embrace the challenges, allow them to mould you and shape you. There is no box, so go as far as you can see…

What is your greatest ambition when it comes to your role in sport?

To help equal the playing fields and to eliminate the pay gap between women and men sports.

Photo 1 Caption: Former SPAR Proteas netball captain, Zanele Mdodana, is humbled as the gsport Trust have reappointed her as official spokesperson for the 15th edition of the prestigious awards ceremony. Photo: Frennie Shivambu