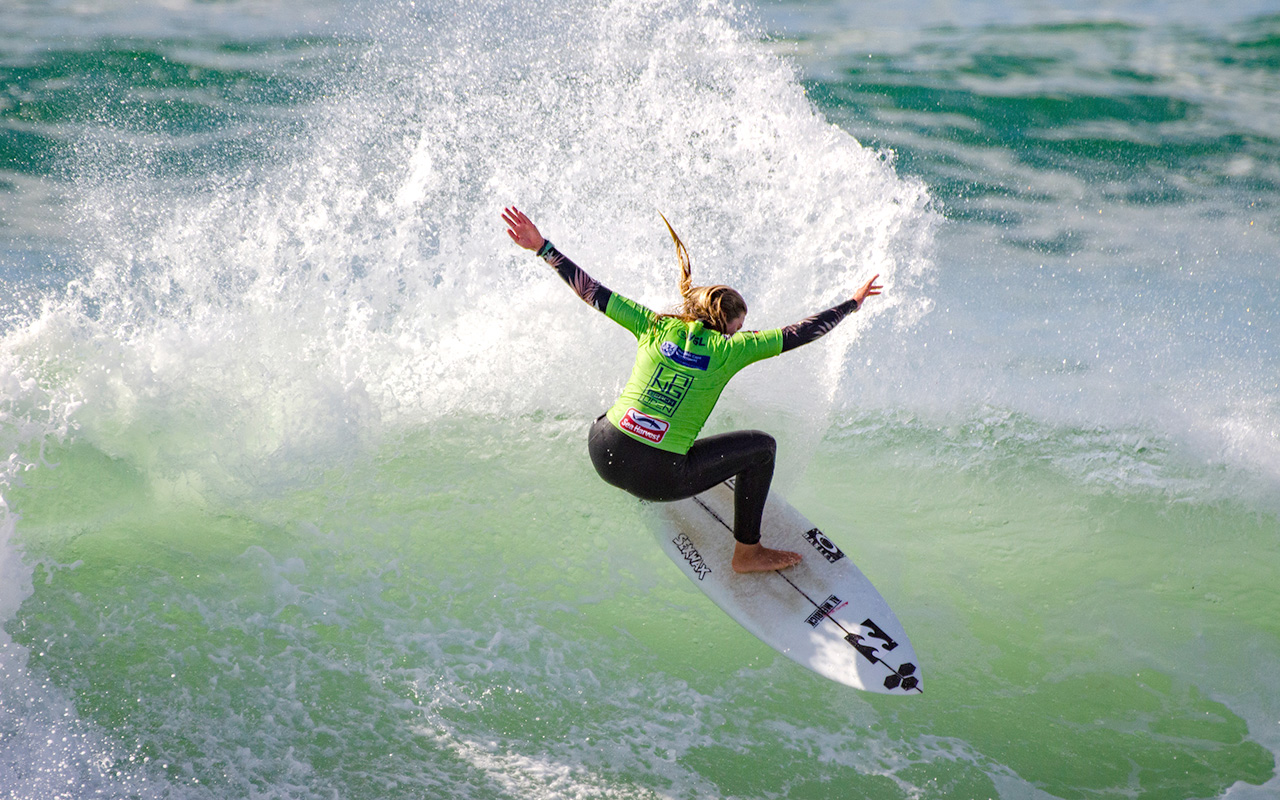 The battle between Steyn (East London) and Sarah Scott (Kommetjie) continued, with Scott having to once again settle for second best. Steyn tightened her grip on the WSL Africa rankings lead with this win, banking 1,000 points and moving one step closer to qualifying for the Challenger Series.

“I’m really happy with how the final went, because my quarter and semi heats were a little bit sketchy. It was so wild out there, but I’m happy that the waves got better for the final and I can’t wait for Nahoon,” said Steyn.

It was a tense start to the final with a few uncompleted rides, but then the energy shifted when Steyn executed one big hack in the critical section of the wave for her opening ride to score a 4.50 (out of a possible 10).

Scott and Natasha van Greunen (Muizenberg) each found a decent wave to start building on their scores, while Sarah Baum (Durban) struggled to find her footing in the unruly surf. Steyn hammered the nail in the coffin when she caught a long left-hand wave to fit in a couple of strong turns and a committed finishing maneuver in shore break, staying on her feet to ride it out for an excellent 9.00 point ride.

Van Greunen secured second place ahead of Scott and Baum when she weaved together a few good turns and managed to hang on through the kelp in the shore break.

Despite a disappointing fourth-place finish for Baum, this was her second QS 1,000 Final after placing runner-up at the Gage Roads Port Stephens Pro QS1,000 in Australia last month. She’ll be aiming to take this momentum into the next event at the Sea Harvest Nahoon Open presented by Cell C.

In the first semi-final, it was clear that the judges were taking the testing conditions into consideration, awarding scores for single, powerful maneuvers. Baum got the best wave of the heat with a critical hit into the lip of a big wave for a 6.50.

Van Greunen, who competed on the Challenger Series in 2021, secured a spot in the final with a mid-range total, eliminating Kira Hofmeyr (Kommetjie) and Jessie van Niekerk (Cape Town).

The second semi-final saw the top-ranked ladies Scott and Steyn, up against Anastasia Venter (Melkbosstrand) and Emily Winter (Kommetjie). Scott took the top spot with both her waves contributing to her two-wave total. Steyn stayed patient and finally found a wave to utilise her iconic backhand and move into the final, sending Venter and Winter home.