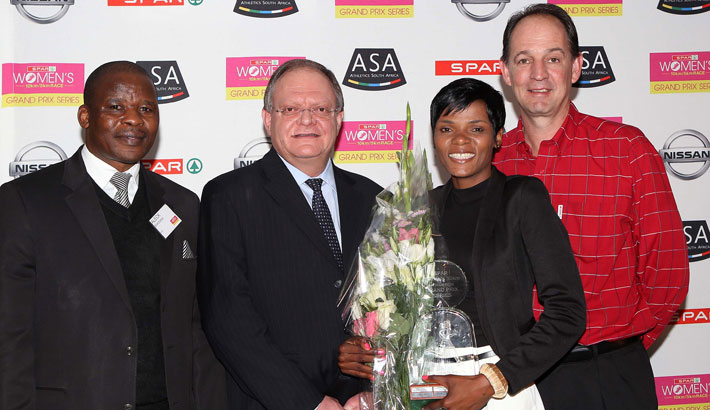 Barefoot runner Diana-Lebo Phalula had plenty to celebrate at the SPAR Grand Prix Awards at the Wanderers Club on Tuesday, when she was handed the handed the keys to a brand-new Nissan Micra.

Phalula became the fifth person to win the Grand Prix title, finishing the five-race SPAR Women’s Challenge series with a total of 110 points. Her achievement was particularly remarkable, as she had been troubled with a hamstring injury for much of the year.

Phalula’s record-breaking wins in Cape Town and Port Elizabeth, and her top five finishes in Durban, Pretoria and Johannesburg ensured that no-one was able to overtake her on the Grand Prix ladder.

Her twin sister, Lebogang, also claimed two titles, winning in Durban and Johannesburg, but a poor finish in Cape Town, where she came 17th, meant that two other runners, Rene Kalmer and Mapaseka Makhanya finished ahead of her on the Grand Prix table.

Kalmer and Makhanya were both proof that consistency of performance is valuable in the Grand Prix. It was the first time in many years that Kalmer, three times Grand Prix winner, finished in the top eight in all five races, earning her 81 points, three ahead of last year’s title holder, Makhanya, whose lowest finish was seventh.

“I’m so excited about winning the car. It’s the biggest thing I’ve ever won,” said Diana-Lebo Phalula. “It will make getting to training so much easier. The thought of winning a car also makes it easier to get up in on a cold morning, when you don’t feel like training.”

Phalula said she would dedicate 2015 to trying to qualify for the five thousand and ten thousand-metre events at the Olympic Games in Rio de Janeiro in 2016. “I also want to break the South African record next year,” she said.

“I will share the car with my sister – we’re twins, and what’s mine is hers,” added Phalula.

Lebogang Phalula said she was delighted that she would be sharing the car, and would use her prize money to pay for petrol and insurance for the vehicle. “But next year, I’m going to win the car,” she laughed.

Lebogang said she was very happy to have proved herself, after the agony of a having to serve a doping ban.

“I’m running clean, and I am so happy to be back, and doing well,” she said.

Nicole van der Merwe won the junior title, with 31 points, and Ronel Thomas was the top veteran, with 29. Elmarie Coetzee was the winner of the masters’ category, with 28 points, and Margie Saunders finished at the top of the grandmaster table.

Boxer clinched the club competition, ending years of dominance by Nedbank. Boxer finished with 248 points, followed by Transnet, with 158. Maxed Elite came third, with 111, and Nedbank fourth, with 82.

Mike Prentice, SPAR Group Marketing Executive said that his company were delighted with the success of the series. “ SPAR take pride in our investment into women’s road running in South Africa and to encourage and reward the top performing athletes with our Grand Prix series is a token of appreciation for the hard work and dedication these athletes put into road running in the country.”

“My congratulations to all the category winner in particular Diana-Lebo who has impressed so much this year on the road and who together with her sister Lebogang add so much fun, energy and character to road running in the country.”

Prentice ended by announcing that SPAR would continue with the Grand Prix in 2015 and planned it to be a bigger and better series.