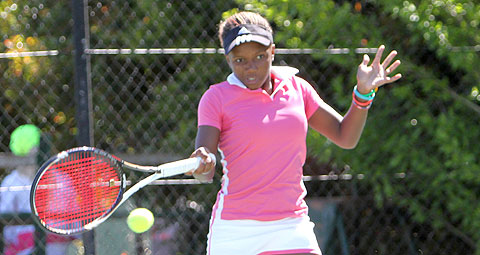 You’ve got to hand it to Zimbabwe’s Valeria Bhunu, the girls’ Under-18 winner at the SAS Junior ITF 2 tournament in Stellenbosch, who overcame stubborn resistance from SA’s Jessica Simpson to run out a 7-5 6-2 win against the 3rd-seeded Simpson in Stellenbosch on Friday, 26 October, 2012.

Three months go Bhunu required surgery to repair damage to her hand and she only returned to competitive tennis last week.

To achieve her victory on Friday, the fourth-seeded Bhunu beat the third-seeded South African Jessica Simpson, one of the stand-out performers at the two international events in Stellenbosch over the past fortnight.

Simpson’s won the under-18 SAS Junior ITF 1 title last week, while Bhunu reached the semis and both players are presently grooming their game at the Growing Sports Foundation Academy in Cape Town.

Bhunu went into the Friday’s final on the back of an authoritative 6-1 6-2 win over the top seed Janet Koch on Thursday, and she showed the same of composure against Simpson, who battled to get game on track for most of the way.

Simpson battled with her serve in the second set and it clearly affected the rest of her game too. Bhunu, on the other hand, kept her game tight and varied her play. At times she cleverly slowed down the game to deny Simpson the pace which her solid groundstrokes seem to thrive on.

Bhunu’s hand appears to have healed well, and to date there are no sign of ill-effects.

There was glory for South Africa in the girls doubles final after the second-seed pairing of Janet Koch and Amy Olivier defeated the top seeds Nicole Dzenga of Zimbabwe and Elizabeth Kapari of Ghana 4-6 7-6 (4) (10-5).

The Zimbabwe – Ghana combination was particularly strong in their play at the net, but as the match wore on they were not able to group points often enough to make it count on the score sheet.

Collectively Dzenga and Kapari, clearly enjoying their final appearance, were overly aggressive at times, and that caused them to make several unforced errors, while the SA duo absorbed their pressure to round off a matchwinning performance in the deciding championship tiebreak.