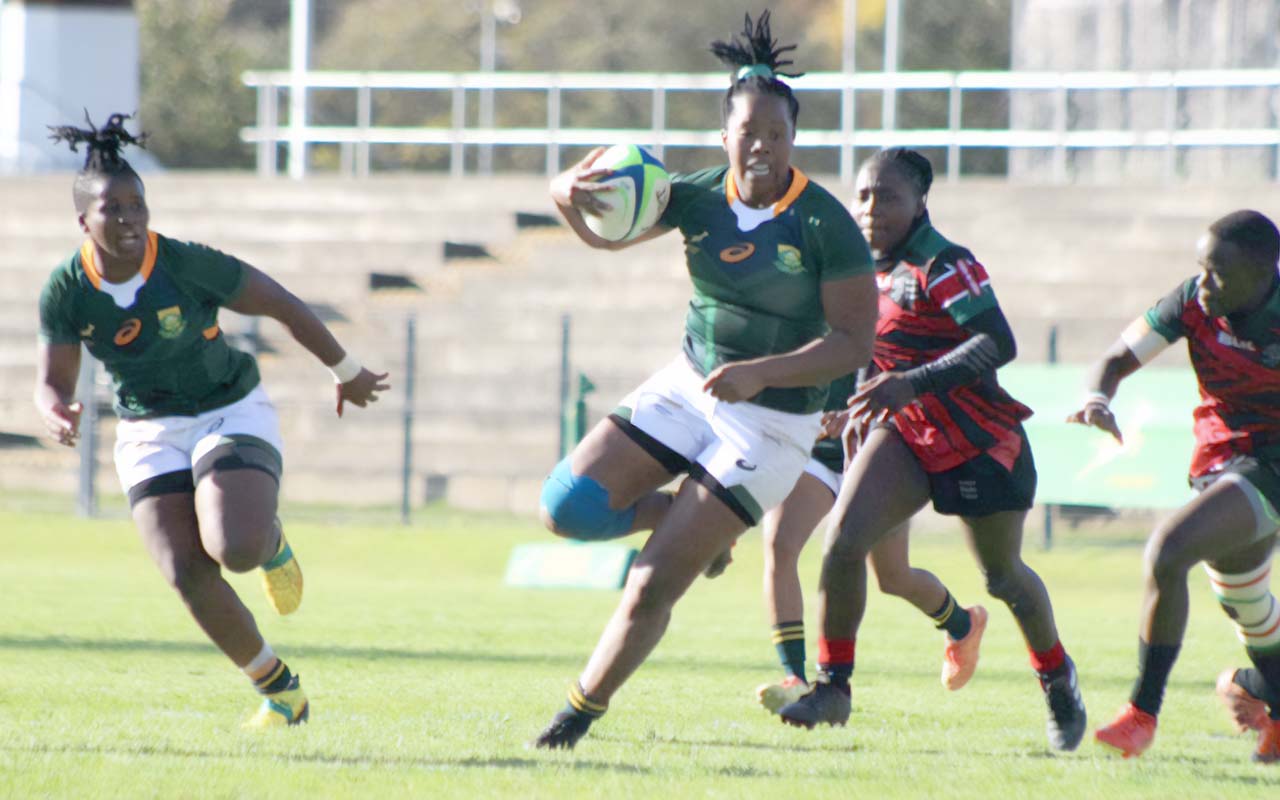 Springbok Women coach Stanley Raubenheimer applauded his team for their 66-0 victory over Kenya in Stellenbosch on Thursday, 12 August 2021, and said their ability to keep their structures in place despite the one sided scoreline added to the overall performance by the team.

Zintle Mpupha scored four of the South Africans’ 12 tries in their first international outing in almost two years. They will play Kenya in the second Test in Stellenbosch on Monday, 16 August.

“It was wonderful to see the squad out there, applying themselves and implementing what we worked on in the many training sessions we’ve had since our last match,” said Raubenheimer.

“You can train as much as you like, but you will not know what the progress was until you are tested in a match, and Kenya did that today.

“We are really grateful to World Rugby, SA Rugby, Rugby Afrique and Kenya who made this possible, we really appreciate the opportunity to play Test matches again. We needed to see how we have progressed, and I am very happy with the effort.

“We had a couple of objectives today – we wanted to give some new squad members an opportunity to play and that went well. We also spoke about our processes and what we want to achieve from the match. We never looked at the score and kept our heads down, trying to execute those processes and I was happy with how that went.”

Raubenheimer said that although their performance wasn’t perfect, a number of aspects proved productive: “We had some good lineouts, some good scrums and our general set-piece was good.

“If you compare this performance against our previous outing against Kenya in the African Cup in 2019, we did much better today and that was because we were so process-driven,” Raubenheimer added.

Hosts Dominated the Match from Start to Finish

Mpupha, who also kicked three conversions, ended with a personal tally of 26 points in a match dominated by the hosts’ backline. They scored nine of the 12 tries and held the upper hand for most of the match.

It was an all-team affair though as the forwards also played their part in the big win, enjoying dominance in the set-piece. Two of the three forward tries were scored by No 8 Sizophila Solontsi, with the first of those coming off the back of a strong scrum near the Kenyan line. Her second try – the last of the match – came from a powerful burst by the hard-running loose forward.

With their pack in control and good hand speed by the halfbacks, Felicia Jacobs and the evergreen Zenay Jordaan, the backs had ample space (and pace) to run at the Kenyan defence. The South African backline ran hard and straight and had their opponents in all sorts of trouble.

Kenya started the match well, keeping the ball through a number of phases, but the Springbok Women were not allowing them any holes.

Mpupha scored the first of her three first-half tries from the first attack, with the ball sent wide after a good forward set-up and it was 5-0 after eight minutes.

A minute later she scored again – after good break down the right by wing Veroeshka Grain, before the ball was worked to the left and Mpupha went over in the same corner.

Grain then turned provider to send fullback Eloise Webb over in the corner for the first of her two tries. Flanker Lusanda Dumke had a strong burst which had the Kenyan defence under pressure and from the resulting play, Webb found space to score.

Kenya started to gain some ground in the game, mainly by using their pack of forwards, which forced SA into conceding penalties. It also stopped the local side’s scoring spree, but only temporarily as Grain was sent over in the corner after a lineout win near the Kenyan line. The ball was moved swiftly and with good passing to the right and after 25 minutes, Grain added the fourth try of the match.

Webb scored her second 29 minutes in. The Bok lineout drive was stopped, but when the ball was moved to the back, Webb joined the line at the correct moment and angle to beat two defenders to the line.

Mpupha converted for a 27-0 lead, before she went over for her third try just before the break after the South Africans kicked ahead and won the race to the line.

Solontsi scored from a powerful Bok scrum to bring the half to a close.

The second half started in the same try-scoring fashion. Jacobs scored a quick try from close range before inside centre Chumisa Qawe’s hard run resulted in her five pointer, which was converted by Mpupha to take the lead out to 49-0.

Mpupha then added her fourth before she was given a well-earned rest by Raubenheimer.

Raubenheimer made a number of substitutions in this time, but that did not stop flank Sinazo Mcatshulwa to score following a powerful run. The scoring momentum was halted though and although Solontsi got her second after a burst down the touchline to bring up the final score line, Kenya managed some possession and defensive recovery to keep the home side from adding to their tally.

Photo 1 Caption: Springbok Women coach Stanley Raubenheimer applauded his team for their 66-0 victory over Kenya in Stellenbosch on Thursday, 12 August 2021, and said their ability to keep their structures in place despite the one-sided scoreline added to the overall performance by the team. Photo: WomenBoks (Twitter)