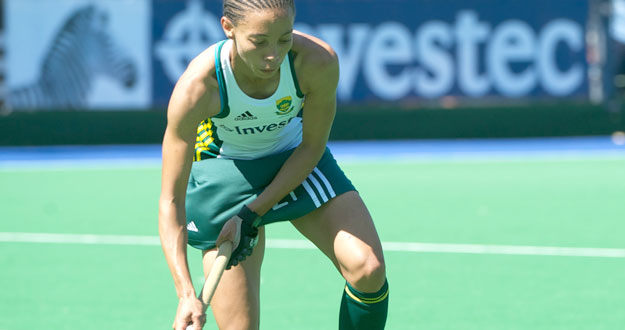 The feast of hockey action in Cape Town over the next four weeks kicks off at 5.30pm on Monday when the Investec South Africa women’s team take on fellow London 2012 Olympians Belgium, at the Central Hockey Club in Vygieskraal.

The four-Test series will see SA without major stars in captain Marsha Marescia, world record goalscorer Pietie Coetzee and double Olympian Tarryn Bright, but it gives the opportunity for others to stake a claim.

The series is a precursor of the World League Round 2 tournament, and is followed by the prestigious Investec Challenge that includes world number one and London 2012 Olympic gold medallists Holland – all in Cape Town over the next four weeks.

One of South Africa’s goals this month is to finish in the top two of the WLR2 competition featuring Ghana, Belgium, Azerbaijan and Austria, in order to qualify for the WL semi-finals in either Germany or Holland in June.

Double Olympian Lenise Marais – a non-nonsense defender, takes over the captain’s armband, and the Durban schoolteacher said that the newer players are stepping up to the challenge.

“We have been trying new combinations during the training sessions over the past three days with the aim of gelling into a very competitive unit, and the youngsters are putting their hands up.

“When the more experienced girls come in for the World League (at Hartleyvale Hockey Stadium from January 22) and the Investec Challenge (from February 4 at the same venue), the younger players can provide us with cover in certain areas,” said Marais.

The second Test is at 5.30 pm Wednesday – once again at Central HC – while the third Test kicks off at 6 pm Friday at Hartleyvale with the final Test at 3 pm on Saturday at the same venue.

“We are in a new phase of where the team is going, and are trying to build a culture of winning,” said Marais. The Rio 2016 Olympics is the ultimate aim in this new four-year cycle, but the KZN Coastal Raiders kingpin said there were also more immediate goals in mind.

The team is focussed on finishing in the top two at the World League event in Cape Town, in order to qualify for the WL semi-finals in Europe in June is one of them.

“In terms of time scale we are also looking at what we can do in the next two years as we head towards the 2014 World Cup (in Holland) and 2014 Glasgow Commonwealth Games,” said Marais, who added that the Investec Challenge in early February against world number one and London 2012 gold medallists Holland, bronze medallists England (Great Britain) and high-achieving Australia would be another opportunity to measure where the SA team are in terms of growth.

“With this in mind, we are undoubtedly in it to win it against the Belgians,” said Marais.

Coach Cautions Much to Do

“The very best teams have the upper hand as their play in the attacking third,” Investec South Africa women’s hockey team head coach Giles Bonnet, “Allied to their finishing, always more clinical than ours, and that is the margin of difference that wins games against us.”

“We will be looking to emulate this in 2013,” continues Bonnet, as the national squad put the final touches to their training ahead of the opening game of the four-Test series against Belgium.

“Linked to this is the 2013 development of the team in specific focused areas, areas we can become as good as the top teams in the world in, and we should focus on these, whilst working on the key deliverables from London, so three objectives,” said the Amsterdam-based Bonnet.

SA also have the 2013 Africa Cup in August, which the country is hoping to host, where the winner will qualify for the 2014 World Cup that will take place in The Hague, Holland.

“The coaching staff want introduce more speed, explosivity and mobility to our game, develop more pressure without the ball, improve awareness of choices on the field and decision-making under pressure, be more direct in our tactics, improve skills position by position, improve our leadership, mentality and player ownership of the process, utilise data to measure performance, align direction for the players and as a tactical tool in matches.

“All seven core deliverables are interlinked, and contribute collectively to the impact we need to generate in this period,” said Bonnet.

South African women’s hockey goalkeeper, Phumelela Mbande, is approaching twenty years in hockey and is finding power in using her voice to champion a new future for the next generation. Mbande...

Women’s History Month saw a growth and visibility in women’s sport as professional women’s hockey was hosted for the first time at Madison Square Garden. The game was the first-ever...