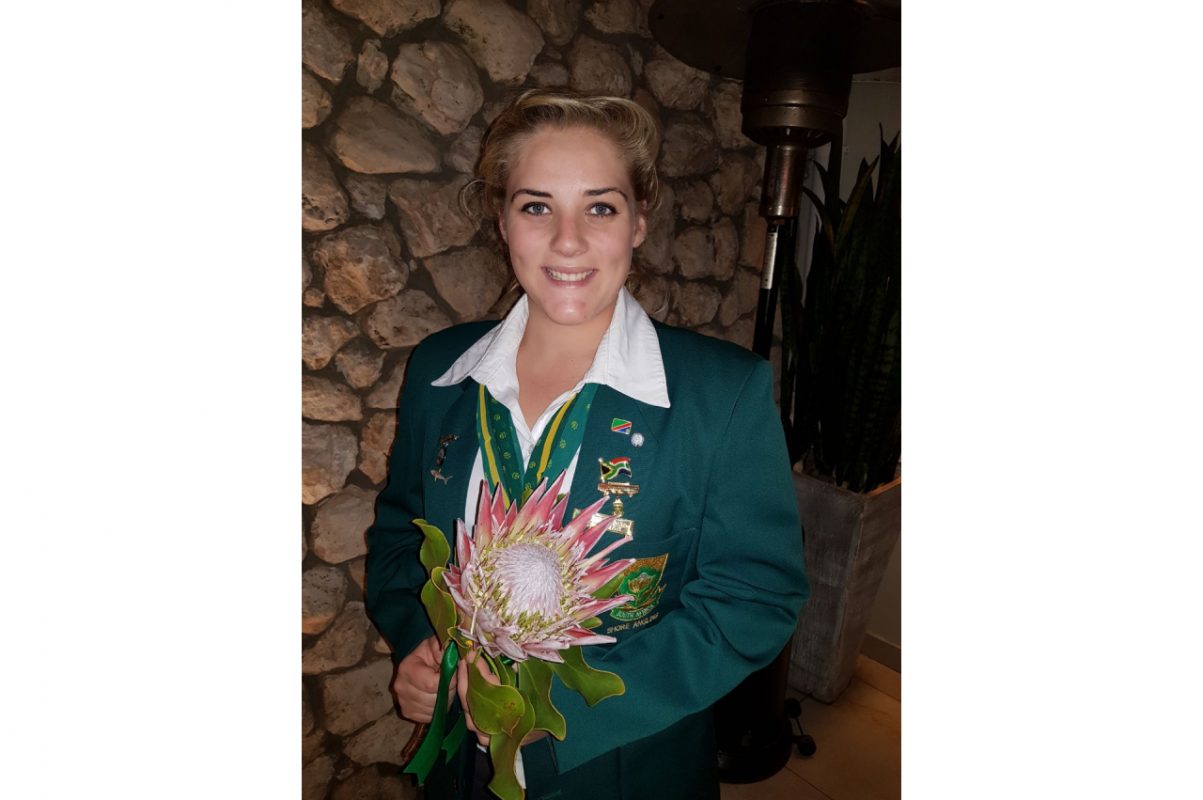 South African angler, Cara Cowan, is aiming to encourage more women and young girls to venture into the sport as she shares her knowledge and experience with the next generation.

The 25-year-old became the first woman to be crowned champion at the World Championship in Shore Angling for Pairs that took place in 2021 in Troia Grandola, Portugal.

At five, Cowan had already developed a passion for fishing and, by the age the age of nine, she was angling competitively.

In her teenage years, Cowan became the first woman to compete at junior nationals and was the first South African woman to be selected in the Under 16 angling team.

Speaking to Tatenda Gondo, Cowan chats about competing in a male-dominated sport and paving the way for the next generation.

Hello and thank you, Cara, for taking the time to chat with us. Please tell us about yourself.

I am a 25-year-old female competing in a “man’s sport” but that doesn’t stop me. I have made it my mission in life to show the females in our sport that being female doesn’t limit you. My love for angling developed at a young age around 5 or 6 but only started Angling competitively at the age of 9.

I first competed for my province in 2011, where I competed against 56 other males fewer than 16 anglers. I was the first and only female to compete at junior nationals. That national I finished in the top 5 and was awarded Junior Protea Colours, this made me the first female in South Africa to get chosen for the u16 angling team.

I was also informed by the South African Sports Confederation and Olympic committee that I was the first female in South Africa to make a men’s disciplined team. I travelled to Italy later that year to compete in the FIPS Angling World Games.

Since 2011, I progressed onto the U21 Junior KZN team, where again I was the first woman to be a part of the team and I competed against boys until 2016.

From 2012, I participated in the ladies division, through hard work and dedication and many years of competing I was awarded South African colours in 2015 to compete in the Gus Kolner International against Namibia for the ladies team.

At the Gus Kolner International, our team won gold and I won the heaviest edible fish for the competition. In 2017 I was awarded top junior lady angler and was ranked in the top 20 in the country for shore angling in the lady’s division.

In 2019 I became the top senior lady in the country for shore angling as well as top-ranked lady over 3 years. It was after this tournament where I got offered to be brand ambassador for a top brand in South Africa, Assassin. Brand ambassadorships are rare for ladies, and I would like to thank them for their support.

Competing in Portugal in November 2021 was a life-changing tournament, the best one I have had so far. This is where I managed to win the title of world champion in Pairs with my partner Jacques Malherbe as well as bring back the team gold.

Where did your love for angling come from?

My dad used to take me and my brother to the beach with his boat. I took a liking to fish off the beach where I started fishing competitively in the shore angling facet when I was 9.

Not many women are into angling in South Africa. Please tell us how this makes you feels as you pave the way for gender balance in the sport.

It saddens me to say that there are fewer and fewer females in angling every year, this is due to the high costs of participating as it is all self-funded and sponsorships are hard to come by for the females in South African Shore Angling. However, I am on a mission to recruit, this sport is an amazing one and it is such an honour for me to be a female of many firsts in the sport. I have worked hard to overcome any negative stigma around being a female and competing in men’s competitions and I would like to think that being a female that fishes is becoming more accepted within the angling community.

How many times have you been crowned as SASAA National Champion?

You were part of the South African squad that participated at the Fips-M World Games, what was that experience in Italy like?

The 2011 Junior World games in Italy was an exciting, scary, and very fun one. Being the first female to be representing South Africa at this tournament was a daunting thought as I felt the pressure to perform and not let females down. At the tournament to make the team, I was not very welcomed by the boys so I was nervous to go away with them but the team and management turned out to be amazing and we came together as a team and gave the competition everything we had. With the style of angling being completely different South Africa was not able to take the podium but took it as learnings to practice the style of angling. SASAA has been working hard to provide us with the right competition to better prepare us.

The feeling of becoming individual world champion with my partner Jacques Malherbe was indescribable. The tournament was very tough, having to overcome challenges of Covid, team politics and adapting to a new country’s fishing was tough but we stayed focused to our own goal of being number one and together we managed to push each other to our limits and the hard work paid off as we placed top pair and were given the title of World Champions in Pairs.

And, then how did you feel being the only female on the podium?

This is possibly one of the proudest moments in my angling career. I felt like I had finally shown females participating in any sport that being female is not a disadvantage, you can compete with men internationally and you can win. I am the first female to be part of a winning pair and this is something that I will cherish forever.

What do you attribute your success at the World Championships to?

Many years of practice, a strong mindset and the determination of being the only female. Please don’t ever tell a woman she can’t because she WILL.

What are your aspirations for 2022?

My goals for 2022 is to help grow the ladies division in Shore angling as well as become part of the ladies management to share my knowledge. I would like to better equip the ladies of our sport to go out and defy all stereotypes.

What advice would you give to a woman or a young girl who is afraid of trying shore angling?

I understand the hesitance that comes with joining a male-dominated sport, but you will not find better friends than in our ladies division. When we are on the beach we compete but off the beach, we are like family.

We have our most experienced ladies who will help and mentor you every step along the way. Let’s try to make this a sport of equality. If any female in South Africa is interested in giving shore angling a go they are welcome to contact me on my angling Instagram account @caracowanangling and I will help them in any way possible.

Photo 1 Caption: South African angler, Cara Cowan, is aiming to encourage more women and young girls to venture into the sport as she shares her knowledge and experience with the next generation. Photo: Supplied