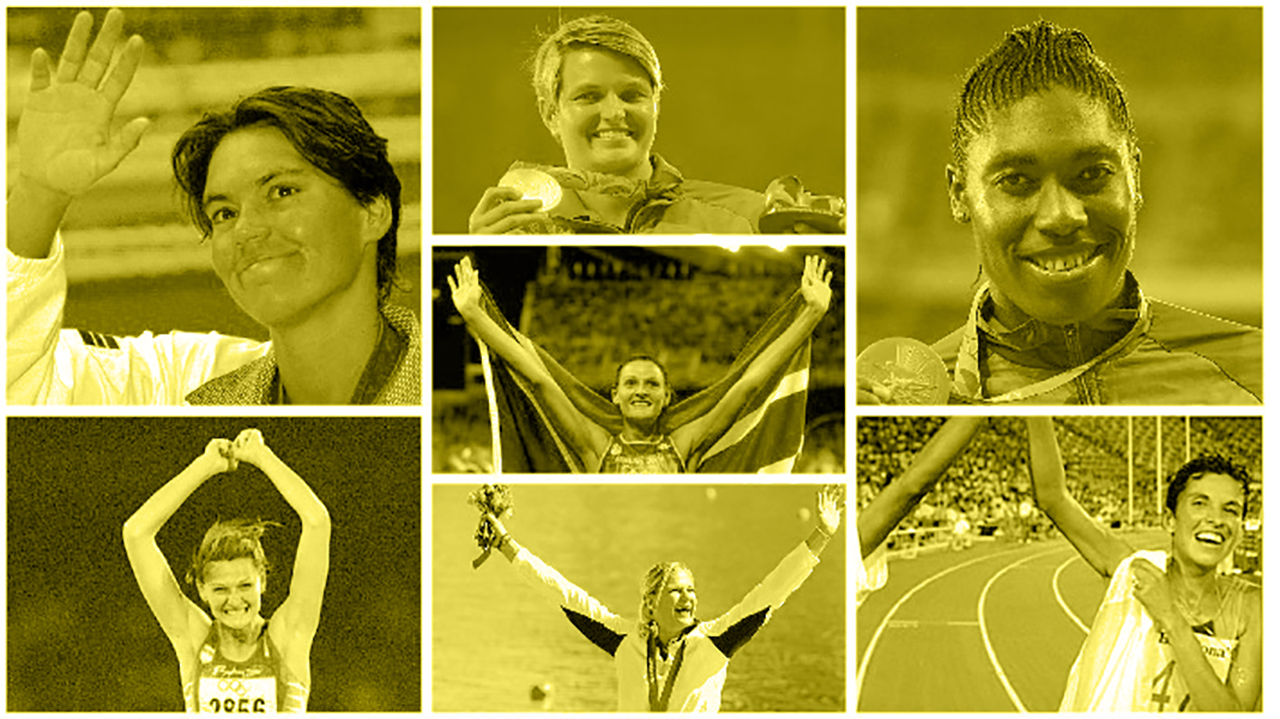 An inspirational group of seven South African sportswomen have won a total of eleven medals at the seven Olympic Games since South Africa’s readmission to the Olympic Movement in 1991.

As we celebrate Olympic Day, gsport pays tribute to the great athletes who excelled on the global stage for South Africa. Give it up for Elana Meyer, Penny Heyns, Caster Semenya, Hestrie Cloete, Marianne Kriel, Bridgitte Hartley and Sunette Viljoen.

On 7 August 1992, Elana Meyer emerged as one of Africa’s most formidable runners winning a historic silver medal in the 10 000m event at the 1992 Barcelona Games in Spain.

“Over 25 years later, people remind me of what it meant to them.” – Elana Meyer

Elana was the country’s best medal hope and she did not disappoint. Reflecting on that historic moment, Meyer told running.competitor.com: “I never realised the significance then, but I do today.

“Today, many people in my country still stop me to tell me where they were when that race was on. It united the country like only sport can do, even if it is for a brief period in time. I gave people courage and hope,” said Meyer.

Heyns is best known for being the only woman in the history of the Olympic Games to have won both the 100m and 200m breaststroke events. She swam in three successive Olympic Games, and broke an astonishing 14 world records in her career.

Heyns won her third Olympic medal – a bronze medal in the 100m breaststroke – at the Sydney 2000 Games, and was named the Female World Swimmer of the year in 1996 and 1999, by the Swimming World Magazine, before retiring from professional swimming in 2001.

For Penny, her greatest sporting moment is winning her first Olympic gold medal.

“At the Atlanta 1996 Games, I’d broken my own world record during the prelims that morning, so the goal was to improve on that – and if so – possibly win gold in the final,” Penny Heyns reflects in thislifeonline.co.za

“As it turned out, I won the race, but my time was slightly slower than the morning, so I had mixed feelings. I was relieved and happy with the win, but disappointed with the time.”

Marianne Kriel won the third medal for SA women at the Atlanta Games, scooping bronze in the 100m backstroke to make it the country’s most prolific women’s medal showing at an Olympic Games since readmission.

Kriel has also won backstroke and freestyle medals for SA at International events, and has earned All Africa Games gold in the 100metre backstroke.

Kriel holds the SA and African backstroke record in the 100- and 200 metre backstroke.

She is the only SA woman to medal in high jump, taking back-to-back silver medals at the Sydney 2000 and the 2004 Athens Games.

She boasts an illustrious athletic career, having also won back-to-back gold medals in the 1998 Kuala Lumpur and 2002 Manchester Commonwealth Games, and successfully defending her World Champion title in 2001 and 2003.

“I thought after my second silver medal at Olympics that was it, it was a high for me, it’s better to be known as someone who retired on a high rather than a low. I guess two silvers are as good as gold,” said Hestrie Cloete via nzhearld.co.nz

Caster Semenya is South Africa’s second woman double Olympic Champion. Flag-bearer for SA at London 2012, Semenya won silver in the 800m race. In 2017, the winner was stripped of her 2012 title for admitting to injecting testosterone prior to competing in the 800m event, elevating Semenya to being awarded Olympic Gold for the 2012 800m race.

At the Rio 2016 Olympic Games, she claimed her second gold Olympic medal in the 800m race.

“I was doing it for my people, the people who support me.” – Caster Semenya

“It means a lot to my people. I have done well. They are proud of me. And that’s my main focus,” said Caster Semenya after winning Olympic Gold, via the Guardian.com.

Bridgitte Hartley became the first person from both South Africa and the African continent to medal at the ICF Canoe Sprint World Championships.

The sprint canoer fetched the second medal at the London 2012 Games for the SA team, winning bronze in the K1 500m canoe sprint, having won a Bronze medal in the K-1 1000m event at the 2009 ICF Champs in Dartmouth three years prior.

In 2014, she repeated her Olympic form, and picked up her third career bronze at the ICF Canoe Sprint World Champs in Moscow.

“This medal is something, which is awarded only every four years! So I feel proud to be one of the elite few to have been awarded an Olympic Games medal for my achievement.” Bridgitte Hartley via gsport.co.za

On 18 August 2018, Sunette Viljoen delivered the performance of her career, winning silver in javelin throw at the Rio 2016 Games with a throw of 69.42 metres, after narrowly missing out on a medal four years earlier.

Having won her fourth consecutive Commonwealth medal this year, Viljoen is aiming to make history at the Olympic Games in Tokyo 2020.

“I dug deep after London and kept fighting, so to win silver is great,’ said Viljoen via Athletics Africa

South Africa first participated at the Summer Olympic Games in 1904. The United Nations General Assembly Resolution 1761 in 1962 barred South Africa from the Games because of Apartheid.

In 1990, negotiations took place to end in South Africa which led to the nation being re-admitted to the international sporting arena with the creation of the South African Sports Confederation and Olympic Committee (SASCOC) in 1991.