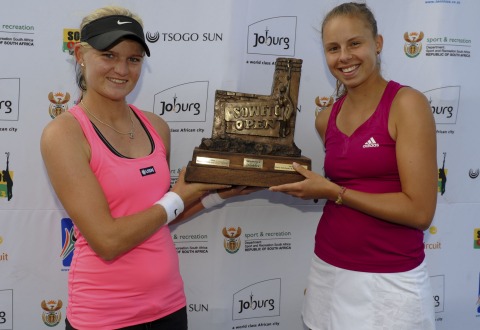 Chanel Simmonds ensured the South African flag was still fluttering proudly at the Arthur Ashe Tennis Centre on Friday when she secured her spot in the finals of the Soweto Open, before clinching the doubles title with partner Magda Linette hours later.

The fifth-seed will now face the No 1 seed Timea Babos on Saturday after weathering the storm against Nadiya Kichenok of the Ukraine, advancing in straight sets 6-2, 6-2.

Both players struggled in the testing windy conditions but it was the 20-year-old from Kempton Park who was able to adapt best, despite a few nervy moments including the third game when Kichenok managed to get the break back in a game that lasted nearly 15 minutes.

She held serve but Simmonds bounced back to wrap the first set up, winning the next four games.

“Nadiya hits the ball really hard and flat so I was struggling with that. I think we were both struggling with rhythm because of the wind. She would hit a flat ball and then every now and then she’d hit it up which made it hard,” said Simmonds.

“It was very close even though the score says 6-2, 6-2, some of those games went on for so long and there were some tough points.”

With her victory, Simmonds reached yet another milestone after becoming the first local player to make it into the last-four on Thursday as well as reaching the final of a $50 000 tournament for the first time.

The world No 114 took control from the outset, racing to a 3-0 lead before clinching the opener in just 27 minutes, with the Serb clearly struggling in the wind.

“I really enjoyed playing today. I think I put too much pressure on myself in the earlier matches but today it was my birthday and I went out and just had fun,” said Babos, who hopes her huge serve will show up against the South African.

“If my serve works, then obviously I’m more confident and I feel everything can work from the baseline so it is a huge advantage if it goes in because I have an 80% chance of winning the point,” she said.

“Tomorrow it will be a huge factor because Chanel plays really solid and doesn’t miss too many balls so I need to get my big first serve in so that I can take control straight away.”

Whatever the outcome today, Simmonds will have to quickly switch her focus to the clay where she will give qualifying another shot after coming agonizingly close at the Australian Open in January, losing in the final round.

“My goal is to get into the main draw of the Grand Slams, so at the moment my ranking is sitting at about 180 and I have to be at more or less 110 to get in so hopefully by the end of the year, I’ll be there,” said Simmonds, who will be gunning for a clean sweep after teaming up with Linette to beat the British pair of Samantha Murray and Jade Windley 6-1, 6-3.

“The Australian Open proved to me that I have the game to go through qualifying and possibly win a few rounds in the Slams with the French and Wimbledon up next.