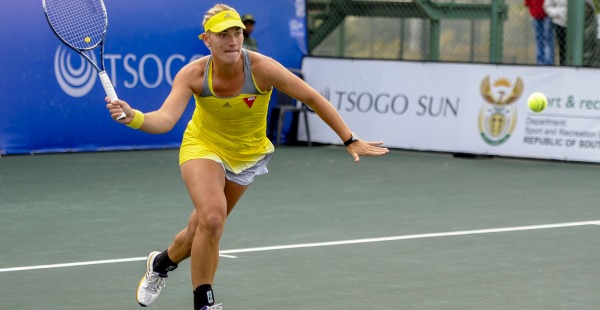 Top-seed Timea Babos came from behind and broke South African hearts to win the Soweto Open at the Arthur Ashe Tennis Centre on Saturday. The No 1 seed downed Chanel Simmonds in a three-set battle which lasted just over two hours, the score 6-7 (7-3), 6-4, 6-1.

But the powerful Babos – ranked 67 places higher than the fifth-seeded Simmonds – hardly had it her own way in a match that featured countless breaks of serve in blustery conditions.

“It was a really tough match and Chanel did a really great job. She made me more and more uncomfortable throughout the first set and at the beginning of the second, so I really had to fight back,” said the world No 114.

“At the start of the second I was just telling my coach that somehow I will manage to win – even if I have to hold my racket in my left hand – so I’m really happy to have won the title.”

Winning the toss and electing to serve, Babos was the first to break and quickly raced to a 3-0 lead before serving for the match at 5-3. Simmonds, plucky as always, fought back to level the match at 5-5, and despite allowing Babos back to enforce a tie-break, kept her nose in front throughout.

The see-saw effect continued in the second until Simmonds eventually secured the break in the fourth game to serve at 3-1. But Babos soon broke back to draw level at 3-3 before surviving a mammoth 10th game, which lasted nearly 15 minutes, saving at least eight break points and more importantly grabbed all the momentum heading into the decider.

“When I won the game at 5-4 I thought okay, I’m back on track and can win this match, so I was trying to focus on the good things, win more points and finally win the match,” said the 20-year-old.

After giving the crowd so much hope early on, Simmonds wilted away in the deciding set, clearly frustrated at not being able to wrap up the match with her opponent in rampant mood.

The big-serving Hungarian only needed 20 minutes to finally put all South African hopes to bed en-route to her 10th ITF singles title.

“I came here to get into the main draw of Wimbledon and being in the semi-finals, I had already done that so, I didn’t just wanna stop there, so with this result I’ll be back in the top-100,” said Babos.

Simmonds, although disappointed, had plenty of positives to take away from this tournament.

“I’m a little disappointed after today but I’m just so glad to have reached the final of a 50 000 even though I lost,” said Simmonds, who is expected to climb at least 30 places from her current position of 181st in the world rankings.

She was especially proud of her efforts during the quarter and semi-finals in which she was able to knock two seeds out, including second-seed Julia Glushko of Israel and Ukrainian Nadiya Kichenok, the No 4 seed respectively.