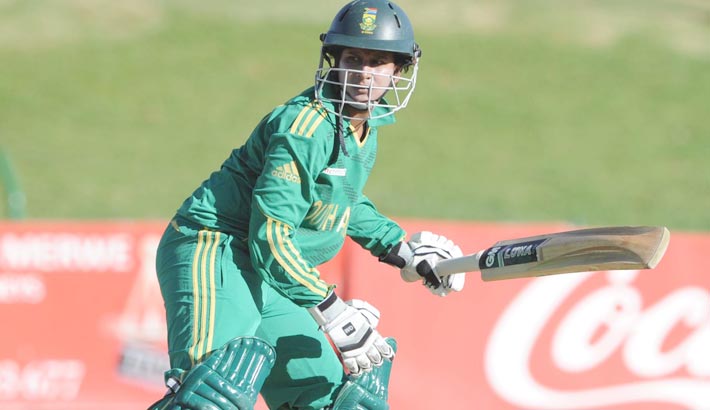 Trisha Chetty (51*) scored an unbeaten half-century to lead the Momentum Proteas women to a comfortable, seven-wicket victory in their opening match of the women’s Twenty20 (T20) International Series against Sri Lanka in Potchefstroom on Thursday. South Africa did well to maintain calm in a match that went down to the final over.

Sri Lanka were restricted to 119/4 in their 20 overs after they were asked to bat first on a flat wicket that yielded no wickets in the first six overs.

The breakthrough came courtesy of off-spinner, Dané van Niekerk, whose delivery led to the stumping of Chamari Atapattu (14) at the start of the seventh over. After that, wickets were difficult to come by, with the second wicket falling in the 14th over thanks to a brilliant piece of fielding by Marcia Letsoalo, which resulted in the visitors losing their captain, Shashikala Siriwardena run out for 15.

Then Letsoalo struck with the ball, removing Yasoda Mendis who managed just seven runs, before Eshani Lokusuriyage was bowled by Marizanne Kapp for nine.

Sri Lanka would have been in a world of trouble had it not been for a valiant batting effort by Lasanthi Madushani (63*), who scored her maiden T20 international half-century. She was very pleased with her input.

“I was very happy to finally score runs on this tour. I am happy to make a contribution to the team even though we lost the match,” said Madushani.

In reply, Trisha Chetty shared a 42-run partnership with Lizelle Lee before the latter was bowled by Udeshika Prabodhani for 28 in the sixth over. South Africa’s captain, Mignon du Preez (2), followed soon after, victim of a run out just two overs later.

Chetty and Kapp steadied the innings, adding 37 runs between them before the latter was removed by Siriwardena for 15 off 17 balls.

Van Niekerk and Chetty shared an unbeaten 31-run, fourth-wicket stand, staying calm even when they needed seven off the last two overs to win. Van Niekerk ended the match with a powerfully struck boundary to get South Africa one-nil up in the three-match series.

Chetty is pleased with her good run in form but believes both she and the side still have a lot to work to do before they reach the ICC Women’s World T20 in March next year.

“I’m really happy with the way that I played today,” she said. “It’s always nice to score runs and to be able to bat through an innings, which is something I have been working on.

“I still have a long way to go, though, if I want to be a better player,” said Chetty. “I think the team did a really good job, but we all still have a few things to work on before we can call ourselves World Cup ready.”

Siriwardena was disappointed with her side’s loss and believes that they fell 20 runs short. “Considering that we could have made another 40 runs after the 15-over mark, I’m disappointed we didn’t get there,” she said.

“I thought we could have got 140 plus if we had started hitting bigger shots, but unfortunately for us we didn’t. I think we have adjusted well enough to the South African conditions now, and we will do our best to win one match before we go home.”

The second T20 takes place on Saturday, 2 November at Senwes Park Stadium. Entrance is free and braai facilities are available to the public.

* All matches FREE attendance at Senwes Park in Potchefstroom

Results of the Momentum Proteas vs Sri Lanka ODI tour: