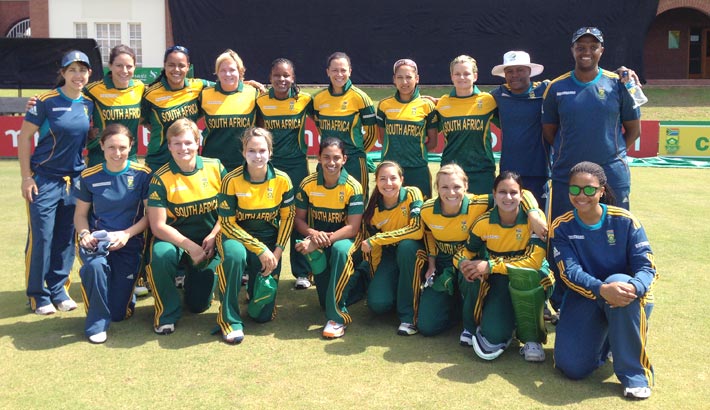 Following their two-nil One-Day International (ODI) series win against Sri Lanka, the Momentum Proteas women are looking forward to the Twenty20 (T20) series starting on Thursday, 31 October 2013, intending to cap off a successful year with a series white-wash.

Marizanne Kapp, who was named Player of the ODI series, is looking forward to the change in format. “I’m very happy with our result in the ODI’s, now the focus has shifted to the T20s, and the team and I are looking forward to getting started,” said Kapp.

The star cricketer attributes her continued run of good form to training with the Eastern Province Academy, where she and Dané van Niekerk are the first women cricketers to be a part of the Academy.

“Being able to train with the Academy has really helped me with my form,” she continued.

“The standard is high and the quality of cricket played keeps the challenge up. It’s been really good for myself and Dané (van Niekerk) to be a part of it and has meant really good preparation for this tour.”

The national team have played better cricket than they have in recent years, completing their eighth consecutive ODI win at the end of the last series.

Skipper, Mignon du Preez, hailed her side’s achievements. “It’s great that we have established a winning attitude and winning culture, but winning is not all that matters,” she said.

“The way that we play our cricket is most important and we have played our best cricket in recent years. I’m very proud of this team and the buy in that everyone has given in our goal to be the very best that we can be,” she said.

South Africa are now eyeing the ICC Women’s World T20 competition, which will take place in Bangladesh in March 2014. This upcoming T20 series is likely to be the team’s last taste of international cricket before the big tournament.

The side has played more international cricket in the past year than they have before and the continued exposure has been invaluable to them.

Kapp is very happy to be playing more international cricket and believes that even more series are needed if South Africa want to be competitive on the world stage.

“It’s a big thing for us, getting to play this much cricket, it’s never happened before,” she continued. “It’s really important for us to play more if we want to be competitive and if we want to grow as players and a team.

“The more cricket you play, the better you get. You can train all you like in the nets but it’s what happens in the middle that matters,” said Kapp.

* All matches FREE attendance at Senwes Park in Potchefstroom

Results of the Momentum Proteas vs Sri Lanka ODI tour: