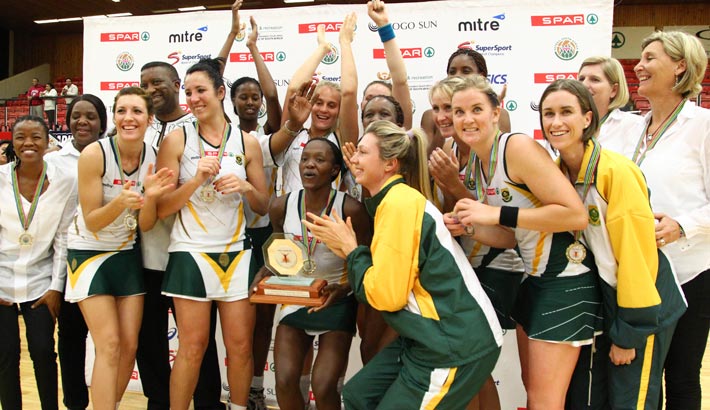 South Africa’s Invitational team rounded off an incredible week of international netball by claiming the second annual Diamond Challenge with another dominant performance in beating Zimbabwe 59—45 in Port Elizabeth on Wednesday evening.

It was an inspiring performance by a young team that had come together only a few days before the event, as Netball South Africa released all but three of the SPAR Proteas players due to work and study commitments ahead of the Fast 5 series, that takes place in New Zealand next month.

Undeterred by their more experienced opposition, the Proteas displayed defensive guile and attacking finesse that was simply beyond their years.

In the offensive circle Lindie Lombard was untouchable, creating space with her quick, zigzagging runs and drawing out the Zimbabwean defence.

In defence the team soaked up the pressure with a Vital Player of the Match performance by Shadine van der Merwe, and the V6-engine in the centre, Captain Bongiwe Msomi, worked every inch of the court to provide options in both attack and defence.

It was a combination that secured numerous turnover that would prove to be key to South Africa’s win.

Unlike the their first two game of the series South Africa dominated from the start, mesmerising the Zimbabweans with their speed, movement and clinical shooting by Goal Shooter Dumisani Chauke.

Zimbabwe’s defence was placed under tremendous pressure and were found wanting as South Africa exploited the space in the circle at will. South Africa raced to 15 goals to 5 lead with just 10 minutes on the clock and the quarter ended with 19 to 11 lead.

Throughout the game Zimbabwe could hold their own on attack moving forward with a moments of precision and speed, it was not sustained enough to provide any real threat of upsetting the status quo. Chasing the game in the second quarter Zimbabwe threw everything into in mindful of not falling too far behind.

They reduced the number of passes to get into the circle and capitalised effectively. They went toe to toe with their neighbours to holding them to 14—13 to go into the half-time break down but in touch distance at 33—24.

At this point Zimbabwe knew it would have to tighten up its defensive and put more pressure on the SA attackers. Try as they might, though, they were always two steps ahead behind the South Africans, allowing the coaching team of Elize Kotze and Elsje Jordaan to experiment with various combinations with one eye on the Commonwealth Games in Scotland next year.

South Africa would hold on to outscore Zimbabwe 15 points to 10 in the third quarter, to lead 48 –34 before an equal points tally of 11 each in the fourth quarter secured them their second Diamond Challenge title in a row.

Msomi, who was chosen Vital Player of the Series, and who was key to her sides’ two trophies in less than a week, said her young team mates had shown maturity beyond their years. “I’m very proud of the new players.

“I’ve practiced with them before they went to Youth Championships, and I knew what they could do. They certainly did not disappoint me nor the team.”

An emotional Kotze said it was a wonderful way to end the competitive netball season and this would give the team the confidence going into a busy 2014.

“This is wonderful for the sport to showcase the talent and the power of netball in South Africa. These youngsters followed up well in their bigger sisters footsteps and I am very proud of them and extremely grateful to have had a chance to work with the country’s best younger players.”