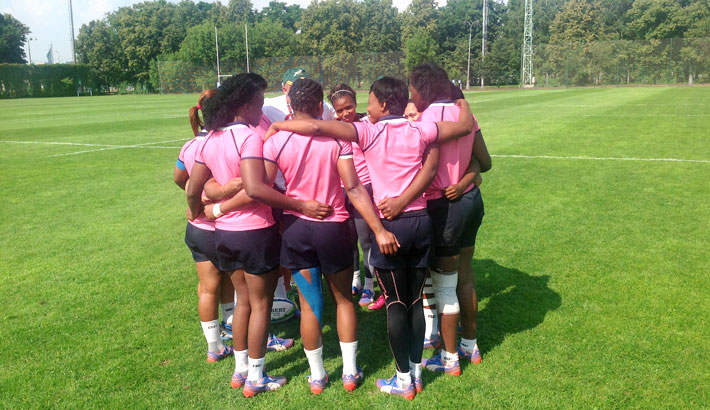 SA Select Sevens Women’s coach Renfred Dazel is excited ahead of the Hong Kong Sevens Invitational on 28 March, following a string of pleasing results against Border and Eastern Province in a hit-out on Saturday.

The SA Select team played four matches at the Nelson Mandela Metropolitan University in Port Elizabeth in a warm-up tournament as part of their Hong Kong preparation. The matches were against two Eastern Province teams, Border and a combined side from the two provinces.

They registered another 31-5 win against Eastern Province’s second team before finishing the series with a 29-10 victory against the combined Border and Eastern Province team.

“I am pleased with the quality of rugby the team delivered on the weekend,” said Dazel. “They managed to implement most of the structures we have been working on during training, which was one of our main goals.

“I was also impressed with the players’ fitness levels, as they maintained a high tempo throughout the matches even though they did not have much time to recover between games. These are clear signs that the hard work on the training field, and the extra gym sessions, are paying off.

“That said there are aspects of our game that require improvement before the Hong Kong Invitational, so we will pay attention to those areas in the next few weeks. However, given the team’s encouraging form, we are looking forward to the Hong Kong event.”

The SA Select team will face 2016 Olympic hosts Brazil and Papua New Guinea in the pool round of the Hong Kong Invitational, which also features Canada, Ireland, China and Japan, who all participated in the second leg of the IRB Women’s Sevens World Series in Atlanta, USA, two weeks ago.

This tournament will be followed by an African series hosted by Kenya in April and the IRB Women’s World Sevens Series leg in Amsterdam in May.

The players will then turn their attention to playing for places in the 26-member squad for the 15-a-side IRB Women’s Rugby World Cup in Paris from August 1 to 17.

Main photo caption: The SA Select Sevens squad members pause for a huddle during training ahead of the Hong Kong Sevens invitational on 28 March. Coach Renfred Dazel has expressed his happiness with the team’s progress, including a series of warm-up fixtures over the weekend. Photo: SARU