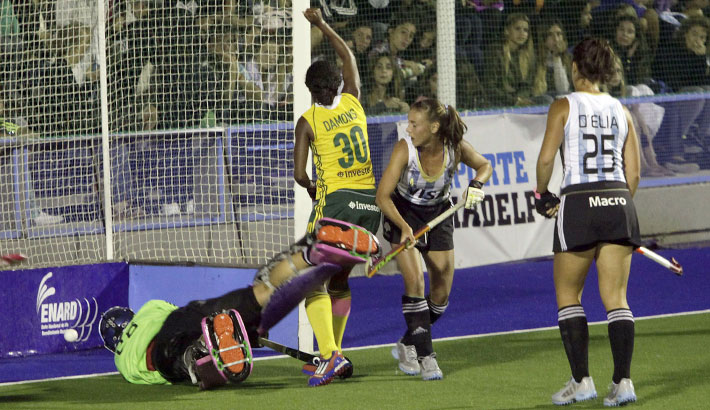 Despite two successive defeats, there is much optimism in the camps of the Investec South Africa women’s hockey team going into the third Test against Argentina on Tuesday night (early Wednesday morning, SA time).

But hockey scorelines can be misleading – top teams may score three goals in five minutes, and the world number-11 South African women’s side, who have dominated healthy segments of their matches, have at times been extremely unfortunate in key plays.

The SA girls welcomed back experienced Western Province duo Shelley Russell and Jade Mayne from their respective English and Belgian club commitments for the second Test, and will be boosted further by the arrival Monday of twice-World All Stars midfielder Marsha Cox from Holland, for the third Test.

SA head coach Giles Bonnet said the girls in green and gold’s first-half performance against world number two in the second Test was probably the best display he has seen in over three years, and the 2-2 scoreline could easily have read 4-2 at one stage.

Captain for the first two Tests, out-and-out striker Sulette Damons, is playing with an unbridled freedom that is reflected in her performances, while Illse Davids and Phumelela Mbande have further enhanced the form shown in the five-Test whitewash of Scotland in Pretoria just over a week ago.

However, the full-strength Las Leonas (The Lionesses) came back strongly after the changeover in the second Test to win 6-2, to add to their 6-1 first-Test victory.

Bonnet is placing much emphasis on unlocking the defences of the reigning World Cup champions and London 2012 Olympic Games silver medallists, and his team have succeeded in creating numerous goalscoring opportunities in the two Tests; the difference being that Argentina have converted theirs into something tangible on the scoreboard.

The immediate bigger picture is the 2014 Hockey World Cup finals that take place from 31 May to 15 June in The Hague, Netherlands, and each day here has been studded with intense training sessions and team- and individual feedback obligations from the video analysis of each match.

That aside, national pride is at stake in the seaside resort of Mar del Plata, 400km from Buenos Aires, and the third Test should throw up some intriguing personal and collective contests.

Meanwhile, the fourth and fifth Tests’ starting times have changed, with the women starting at 10pm SA time on each day.

Main photo caption: One among many highlights for coach Giles Bonnet is out-and-out striker Sulette Damons who, as stand-in captain Captain for the first two Tests, is playing with an unbridled freedom. In this photo from the second Test, Damons signals her goal past Las Leonas keeper Belen Succi, at Mar del Plata in Argentina on Sunday night. Photo: Diego Izquierdo