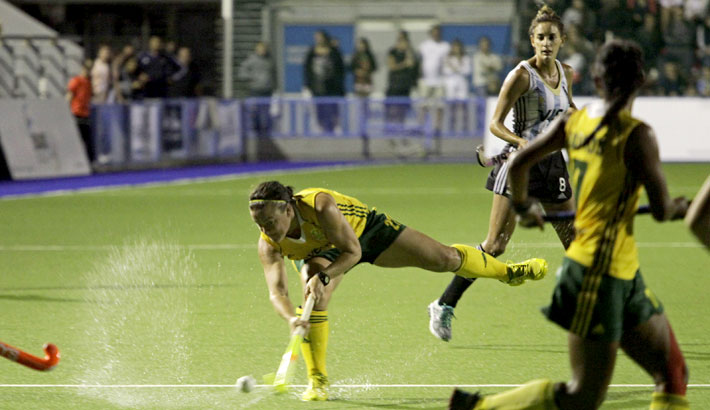 Just when it looked like eight-time World Player of the Year Luciana Aymar was running away with the show, the Investec South Africa women’s hockey team struck twice in stunning fashion to leave the second Test standing at 2-2 on the half-time whistle on Sunday night, but four goals in the second half steered the South Americans to a 6-2 victory.

(Click here to read the Investec SA tour to Argentina preview on gsport, and here for the first Test match review)

Aymar, captain of world number two Argentina – the reigning World Cup champions – sliced through her favourite left channel in inimitable fashion in the ninth and 11th minutes to set up straightforward tap-ins for Carla Rebecchi and Agustina Albertario.

SA showed remarkable pluck in their second Test, and look forward to a Rest Day on Monday ahead of the third fixture on Tuesday (Early Wednesday morning, SA time). Photo: Supplied

Trailing 2-0 inside the quarter-hour with Aymar in irresistible form, SA fought their way back with a brace of superb goals by Tanya Britz in the 16th and 18th minutes, captain Sulette Damons and fellow striker Lilian du Plessis making the vital passes.

SA had their chances after the break but it was Argentina who turned theirs into goals.

And in the 62nd minute Daniela Sruoga followed up Argentina’s eighth PC to make the final score 6-2.

SA goalkeeper Phume Mbande made a host of fine saves – this shot stopper is growing in leaps and bounds – while Shelley Russell, back for this Test along with Jade Mayne, must be wondering what she has to do to convince the officials that she has earned penalty corner decisions.

Argentina won the first Test 6-1 on Saturday night. A Rest Day follows the second Test on Monday, and the third Test is at 1.40am (SA time) on Wednesday morning.

Main photo caption: Investec SA launch another attack on the world no. 2 Las Leonas of Argentina. South Africa came from two goals down to go into half-time 2-all with the five-Test hosts, only to concede four unanswered goals in the second half to lose the second fixture 6-2. Photo: Supplied