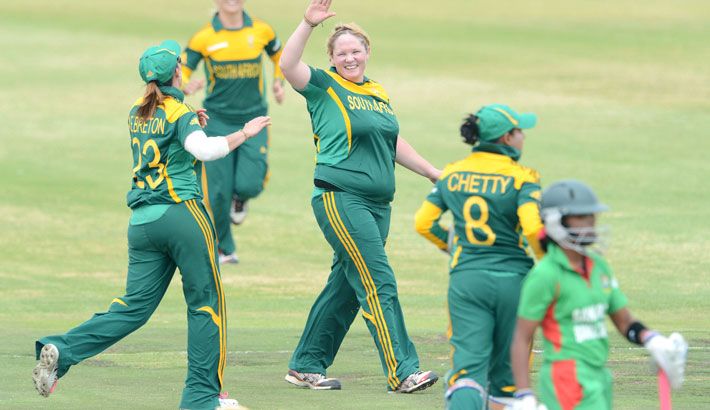 Ahead of their all-important start at the ICC Women’s World Twenty20 against Pakistan in Bangladesh, the Momentum Proteas women bounced back from their 52-run loss to the West Indies earlier this week, to beat Bangladesh by an emphatic eight wickets in their second warm-up match in Savar, Bangladesh, on Friday.

The bowlers set up the match well, restricting the hosts to 85/8 in their allotted overs after they were asked to bat first by South Africa.

South Africa will be happy to see each of Shabnim Ismail, Marizanne Kapp, Dané van Niekerk, Marsha Letsoalo and Suné Luus among their front-line bowlers to claim a wicket, Moseline Daniels chipping in with a tidy 11 runs off her two overs.

In reply, South Africa’s opener, Lizelle Lee, scored an unbeaten 50 off 45 balls to lead her side home. They lost just the wickets of Dané van Niekerk (15 off 15 balls) and captain, Mignon du Preez (12 off 15 balls), on their way to victory.

“Playing in the sub-continent is never easy, but I believe we have adjusted well to the conditions and are ready for the real tournament to start,” she added.

Coach, Hilton Moreeng was satisfied with his side’s performance today. “The true test of a side’s character is how they bounce back from a loss and the team did an outstanding job today,” he commented.

“They bounced back well and produced a very clinical performance and that is enough to make any coach happy. We are definitely not treating these warm-ups lightly, each match is a very important step to our ultimate goal, which is to win the tournament.”

South Africa’s first match of the tournament is against Pakistan on Sunday, 23 March. The other teams in Group A are Australia, Ireland and New Zealand.

They are looking forward to playing Pakistan after having played a month-long triangular series against them and Ireland in Doha in January.

“Pakistan are always a team to look out for, whether it’s a regular series or a tournament,” Du Preez continued. “They are particularly dangerous in a tournament situation and the pressure always brings the best out of their players.

“We have done more than our fair share of homework when it comes to them, and we are just looking forward to playing them once again on the world stage,” she concluded.

Photo caption: After an opening warm-up loss to the West Indies, the Momentum Proteas bounced back with a confidence-boosting win against hosts Bangladesh, ahead of their ICC Women’s World Twenty20 opener against Pakistan on Sunday. In this file photo, Sunette Loubser and team-mates celebrate the wicket of Shaila Sharmin of Bangladesh during the 1st ODI match between the countries at Willowmoore Park, 20 September, 2013, in Benoni. Photo: by Lee Warren/Gallo Images