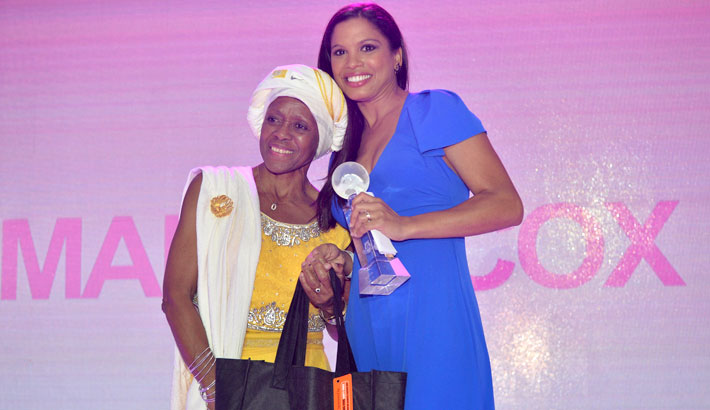 “Marsha is one of our country’s treasures. Whenever she played there was a clear demonstration of love for hockey and love for her country,” Minister Mbalula said.

“From the Olympic Games, Commonwealth Games to the World Cup, South Africa’s flag was flown with pride,” he continued. “We thank Marsha for her contribution to South African Sport, and wish her well in her future endeavours.”

Announcing her retirement after receiving a Special Recognition Award at the 2015 SPAR gsport Awards on Friday, Cox said: “After having played more than 300 matches I’ve decided to call it a day on my international career.”

Cox, formerly Marescia, made her début in October 2001 at the age of 18 and has since gone on to represent her country at three Olympic Games and two World Cups, earning over 300 caps.

She also competed at four Commonwealth Games, and was part of the South African team that finished in 4th place at the 2014 Commonwealth Games. She has been selected for the International Hockey Federation World XI three times – 2007, 2009 and 2010.

“You never want to walk away from the game but there comes a time in every athlete’s career when they just know that it’s time to step down,” she said. “I’ve enjoyed an amazing ride as part of a team of true professionals and for that I will always be grateful.

“I’ve certainly always tried my best, and the teams I’ve played with have always given their all in a very competitive international environment. Now it’s time for the next generation of players, and the next captain to have her opportunity to take South Africa to the next level on the world stage,” said Cox.

“Marsha is a global icon for the game and one of the most recognisable hockey personalities for South African sport,” said SA Hockey Association CEO, Marissa Langeni. “Her retirement after 14 years of unconditional love for the game and unconditional service to her country is an outstanding achievement, and something to be extremely proud of.

“Having played over 300 test caps for South Africa and having captained the national women’s team, she leaves behind a legacy unparalleled and a massive footprint on South African Hockey,” said Langeni.

The 32-year-old Durban native – who lives with her husband in the Netherlands, let a little secret slip that she is expecting, and will take time off to have her first child before considering the future of her professional career in the Dutch Premier League, in the Netherlands.

Photo 2 caption: Cox thanked her many supporters for supporting her dream to represent the country in a moving speech that brought tears to Cox and many in the audience. Cox is pictured with two central figures in her sporting life, her mom, Marian, and Marissa Langeni, CEO of Hockey SA. Photo: Rebecca Hearfield / gsport