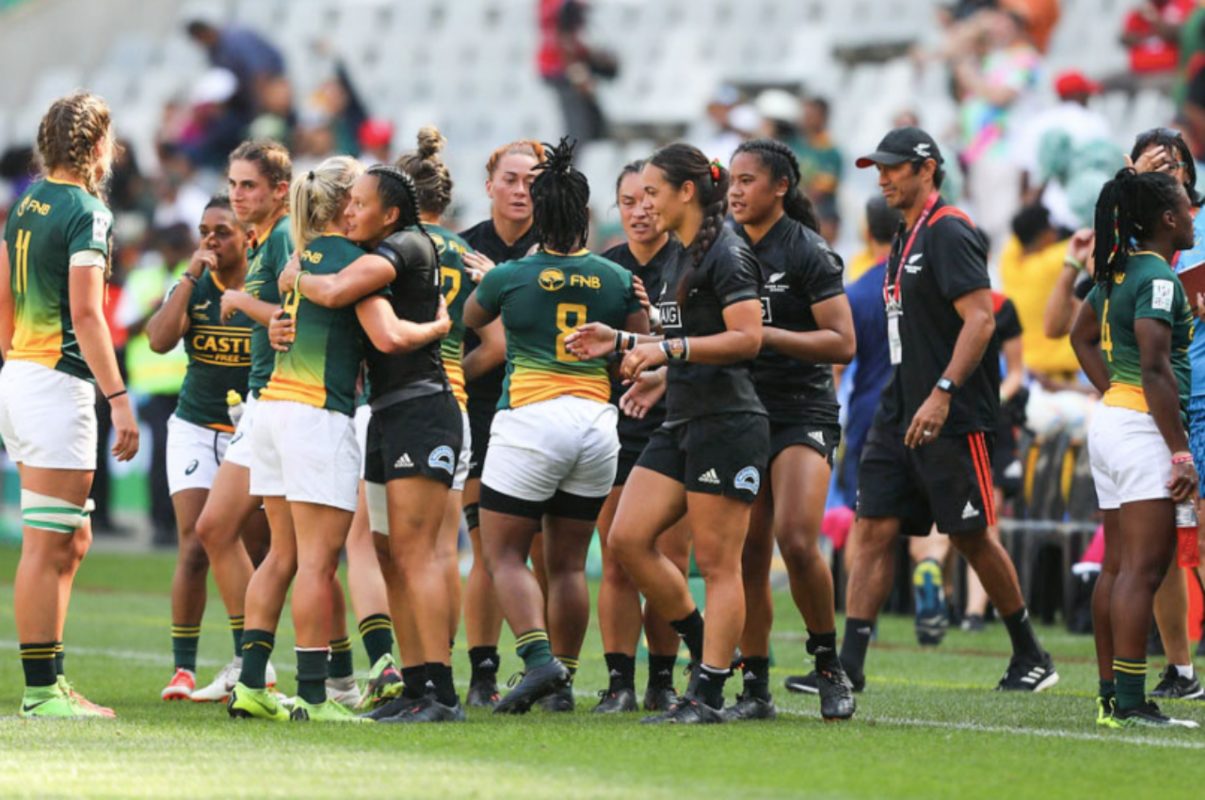 Springbok Women’s Sevens coach Paul Delport has named eight players with HSBC World Rugby Sevens Series experience in his first squad for the 2022 season, which will culminate with the Rugby World Cup Sevens in Cape Town in September.

Rights Mkhari, Lusanda Dumke, Mathrin Simmers, Eloise Webb, Buhlebethu Sonamzi, Sizophila Solontsi, Liske Lategan and 2018 Rugby World Cup Sevens hat-trick hero, Snenhlanhla Shozi, will be joined by some of the country’s most prominent players in the 20-player squad as they start their preparations for a season that also includes the Rugby Africa Cup in April, where the Imbokodo will try and qualify for the Commonwealth Games in Birmingham in July.

Amongst those are Test players, Lerato Makua, Donelle Snyders, Simamkele Namba, Felicia Jacobs, Alichia Arries and Ayanda Malinga – all of whom were part of the Springbok Women’s squads in 2021.

Delport and Springbok Women’s coach, Stanley Raubenheimer ,are working closely together to best manage the players in their respective squads, as Raubenheimer is preparing for the Rugby World Cup in New Zealand in October, and the two national coaches are aligned and in regular discussion on how to best utilize players of national interest this year.

Delport also called on Kemisetso Baloyi, Asisipho Plaatjies, Anelca Hess, Anacadia Minnaar, Amber Meiring and Bianca Augustyn to join the national players at the Stellenbosch Academy of Sport for the week-long camp that starts on Monday, 24 January 2022, after tracking their development as players in the provincial competitions.

SA Rugby High Performance Manager for Women, Lynne Cantwell, expressed her excitement about the camp and said the restart of the Imbokodo programme will be a huge boost for women’s sevens.

“This is fantastic to have the team up and running again and knowing that we have some huge opportunities ahead,” said Cantwell.

“The Rugby World Cup Sevens at home will be an unforgettable experience for those involved, but that is not our only objective this year. The Rugby Africa Cup Sevens in Tunisia in April will offer entry to the Commonwealth Games in July, so that could be another huge opportunity for the squad.

“We are awaiting news on more playing opportunities and the possible resumption of the Challenger Series, but for now we are delightful and motivated to get the programme going again.

“There is no use on dwelling about the impact the pandemic has had, we have another opportunity now and I want to thank all the stakeholders involved for their support.”

For Delport, the camp will provide a much-anticipated return to the training field: “This is such a great opportunity for us as a group and I want to congratulate all the players who are invited.

“They obviously have the skill set we are looking for at the Imbokodo, so this camp will be a first step to see how they shape in a team environment, what areas of their game need some fine-tuning and how they understand our sevens game plan.

“There is no doubt in my mind about the potential of the squad and our improvement to a competitive level will be a responsibility I embrace with both arms as coach,” concluded Delport.

A second camp is planned for mid-February and a third early in March.