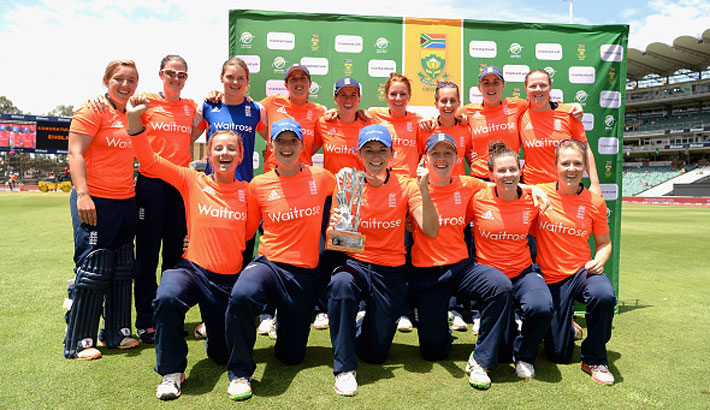 England’s Sarah Taylor once again played a starring role in her side’s four-wicket victory over the Momentum Proteas to clinch the three-match women’s T20 series 2-1 at the Bidvest Wanderers on Sunday.

Taylor scored 60 from 40 deliveries to steer her side to victory after South Africa set a 132-run target for them to chase in the second televised match of the series.

The hosts did well to post 131/4 at the end of their innings after they lost the wickets of Trisha Chetty (0), Dané van Niekerk (5) and Marizanne Kapp (0) in just 1.5 overs after they were put in to bat.

Captain Mignon du Preez and Lizelle Lee brought life back to the innings, sharing a 89-run, fourth-wicket partnership to move their side from 6/3 to 95/4 at 16.1 overs, when du Preez was run out for 39 just after she passed 1,000 T20 runs.

The milestones continued as Lee hit a career best, 69 not out from 61 balls and was joined by Chloe Tryon, who played a helpful cameo of 16 off 13 balls to get their side to a more respectable score.

South Africa tried to stem England’s run scoring, but they did not have enough runs on the scoreboard to defend. Shabnim Ismail was the leading wicket taker with 3/27, but England were scoring at 8.58 runs per over, with Heather Knight and Tammy Beaumont adding helpful contributions of 25 and 21* respectively to get their side over the line in the end.

The hosts do not have time to wallow in their disappointment however, their tour against the West Indies begins on Wednesday, 24 February. They will play a three-match One-Day International (ODI) and three-match T20 series before they depart for the ICC Women’s World T20 in India.

Photo 1 caption: Charlotte Edwards lead her England women team to a convincing win in the early match on Sunday, restricting the home side to 131 before comfortably reaching the target to claim the winners trophy, and the series title 2-1. Photo: BBC Test Match Special

Photo 4 caption: The SA huddle before taking the field for their bowling innings, after posting 131/4 in their 20 overs.