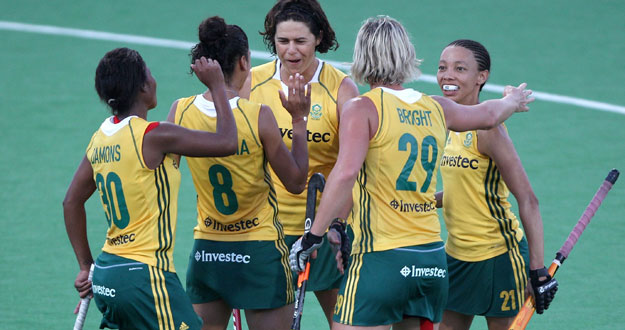 “If there is one player you want to take a goal scoring opportunity in the last few minutes it would be Pietie, she’s the ultimate professional and thrives under pressure,” was Investec South African women’s hockey team assistant coach Fabian Gregory’s summation of world record goalscorer Pietie Coetzee’s winner and hat-trick in the electrifying 3-2 defeat of Belgium, at Hartleyvale in Cape Town on Thursday night.

South Africa’s superstar took her tally to 253 goals in 256 Test matches, and her presence should ensure the women in green and gold beat Azerbaijan at 6pm on Saturday, and Austria at the same time Sunday, to win this World League round two competition.

“We missed 25 penalty corners in the 4-0 Test series loss to Belgium a week ago, and in this game Pietie scored three from five. It was gratifying to see what we do on the training pitch materialise in the match,” said Gregory.

“It is remarkable how her team-mates feed off Pietie’s confidence and the starring roles of key players like Pietie and Sanani meant the supporting actors really came to the party, and this bodes well for the Investec Challenge matches at the beginning of next month against the likes of world number one and 2012 Olympic Games gold medallists Holland, ” Gregory added.

Belgium, who play Ghana at 4pm Saturday and Azerbaijan at the same time Sunday, can only hope that SA somehow lose to the outsiders and that they win their remaining games – an unlikely scenario.

Gregory said captain Marsha Marescia, only the 10th player in the history of the women’s game to reach 300 Test match caps, also brings much to the team and the players feed off her confidence, while goalkeeper Sanani Mangisa was in magnificent form in a clash that could have gone either way – had it not been for the Coetzee factor – while Tarryn Bright in midfield also produced a big performance.

While the coach was concerned at how SA tailed off after an outstanding start to let Belgium back in with a 2-1 half-time lead, he praised the SA team for the character they showed in regaining the advantage after the changeover.