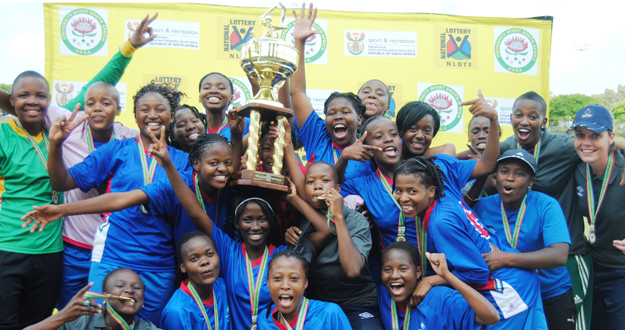 Speaking to gsport after his team beat the University of Pretoria 2-1 in Belville, Cape Town this past weekend, Mokae said: “The standard has gone up compared to other years. We usually score 8 or 10 goals in a match. This year we didn’t score more than four goals in a match. That tells you that the gap is closing, and it is getting more competitive.”

The TUT Pretoria goals were scored by Mary Ntsweng and Tsagane Tshepiso, who scored after the University of Pretoria had taken the lead through Tshililo Ravhuandzo in the first half.

Mokae said the key to TUT Pretoria winning the Championship was preparation. “We prepared well.

“We had program that also took care of mental preparation, to ensure the team was psychologically ready for the battle that lay ahead.”

Mokae said it was unsurprising that all four teams that advanced to the semi-finals – TUT Pretoria, UP, University of Johannesburg and Vaal University of Technology – were from Gauteng.

“The standard of women’s football in Gauteng is very high. Gauteng always fares well in competitions we enter, mostly winning the tournaments. The ABSA Under-19 champions are from Gauteng. A Gauteng team has won the SASOL tournament for the past three years. A Gauteng team has won the USSA Championship for the past six years. Women’s football is definitely on the rise.”

Mokae, who was named Coach of the Tournament, says the key to success at this level of women’s football is to empower coaches and invest in them.

“Yes, I won the award, but I need to work harder. I went in as an underdog, nobody knew me. Now I am a champion, everyone knows who I am, and I am a target,” he laughs.

USSA Football Chairperson, Dennis Tshabalala, said: “On behalf of USSA Football we would like to say that the tournament was a great advert for women’s football, and hence a great success. We saw a number of players emerging and raising their hands to be selected for the USSA Football National team and the Senior Ladies National team, which is good for the country.

“We believe that in the years to come more ladies will play at the University level, as it gives ladies stability in terms of education and playing football, so that when they are done playing football they can contribute to the economy of the country. We would like thank all the teams for their great display of football during the week long tournament.”

The 18th USSA Football National Club Championship took place at the University of the Western Cape in Bellville, Cape Town.