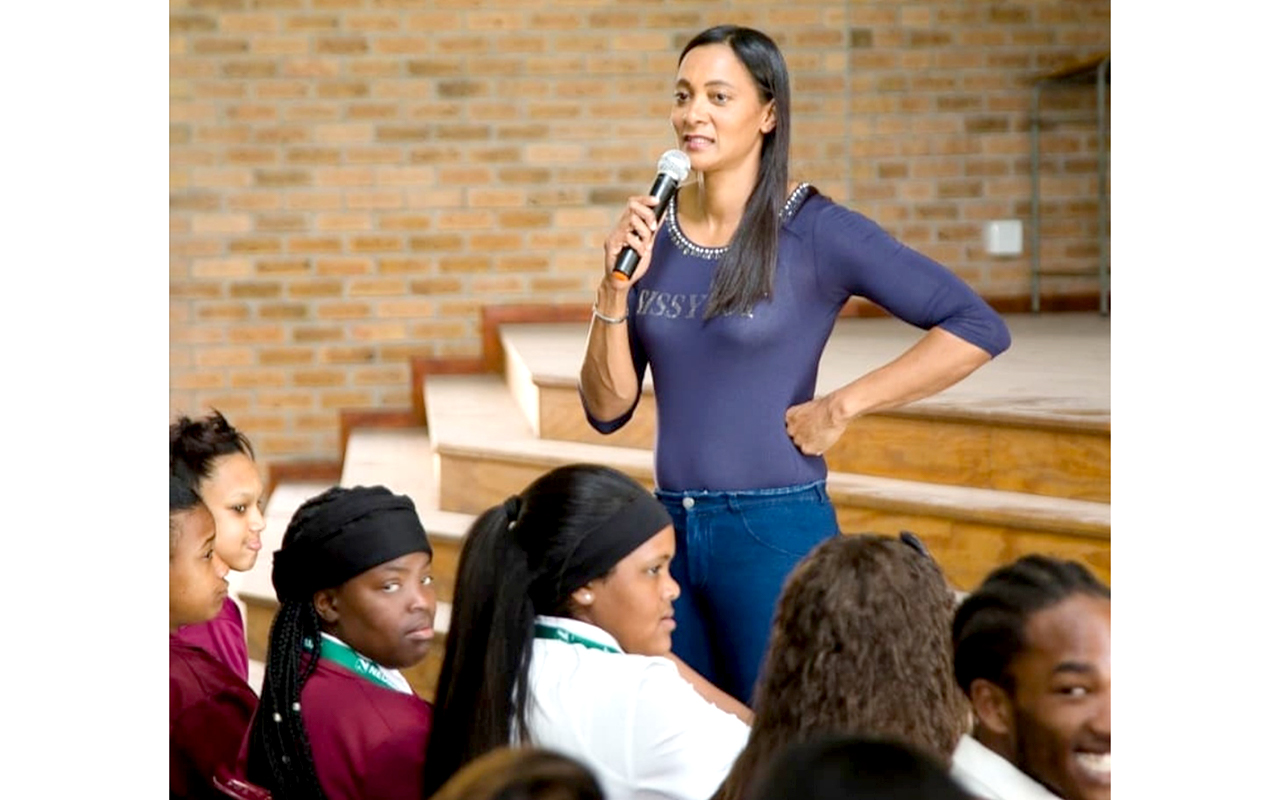 Pillay is actively giving back to her community by hosting coaching clinics to inspire the next generation, and her main focus is the community she grew up in.

The 100m and 200m specialist, who competed at various African Championships, two Olympic and Commonwealth Games, has been sharing her knowledge and experience to groom the youth in her hometown of Macassar in the Western Cape.

Pillay is a big supporter of women in sport and uses her public and social media profiles to raise awareness of what is going on in women’s sport.

She acknowledges the power of freedom, its impact on sport and how it gave her the determination to make her dreams a reality.

She reflects on her journey as an athlete and tells Celine Abrahams how she continues to use the lessons learnt to motivate the youth to be their best.

Geraldine, we have just celebrated Freedom Day. What does freedom mean to you?

I remember as a 17-year-old seeing my grandfather being overly excited that he could vote for the very first time. I remember in 1994 how he got up along with my aunt, my mom and dad at the crack of dawn to go and stand in a long queue to cast their votes. That is probably the fondest memory and probably something that I would not forget.

For me, it was also the freedom that I could do the things at my age at the time that my parents unfortunately did not have. It just really brings back fond memories…

“It meant that I could dream beyond the boundaries of South Africa. It allowed me to dream about going to the Olympic Games and representing my country at the highest level.” – Former Olympian and SA sprint queen, Geraldine Pillay

In athletics it gave me the freedom to dream big and have absolutely no restrictions in where I would want to go with my achievements. And, I am grateful to this day that I had this opportunity and honour to represent South Africa at the Olympics in 2004, at various World Championships, Commonwealth Games, African Championships.

It just gave my dreams wings and there was no limitation to that because I was not going to be restricted politically at the time and the only restriction was my inability to chase after my dreams.

You have had a successful career that saw you participate internationally and at the Olympics. What did it feel like living out your dream?

It is every athletes’ dream to represent their country. I think that is what drives us to get up every day to go on an endure the blood, sweat and tears that comes with the preparations for Olympic participation and for me the realisation it was all so surreal, it felt like a dream that I was going to wake up from.

When I arrived in Athens in 2004 it was a “Wow” moment with the opening ceremony and so many countries were there, and it is so true that the Olympics spirit is something else. Yes, we all want to win medals and want to be the best, but the Olympic spirit is about participation, and so many friendships were forged throughout that journey.

“It such an honour because I am going to be an Olympian until the day I die, and I don’t take that for granted and that is one of my proudest moments in my career.” – Former Olympian and SA sprint queen, Geraldine Pillay

What has it like being a female in the sports industry?

In terms of being a female in the sport industry it has been tough, especially at the time when I was competing.

We didn’t have social media, so we relied on the mainstream media to uplift us, to give us platform where we could promote ourselves and our sport and that was very tough.

Do you think that things have changed over the years in terms of sponsorships investing more into the women’s side?

Sponsorships were extremely hard to come by because they look at females and think that it is not going to be a long-term investment because they think we will quit; we’ll go and have babies.

But that has changed. I have seen some powerful women in sport taking up powerful positions in office, as well as …

“[W]hen you look at Banyana Banyana players, they are also sponsored in their personal capacity and as a federation.” – Former Olympian and SA sprint queen, Geraldine Pillay

That tells me that slowly but surely, we are all beginning to move in the same direction. In a direction where females will be respected and supported as much as their male counterparts.

How are you playing your part today to change the view on women’s sport?

I support our current female athletes and administrators by posting, advertising, word of mouth.

“If there is anything happening, if there is a female soccer match that is on, I will post on all of my social media platforms to inform people about it.” – Former Olympian and SA sprint queen, Geraldine Pillay

Sometimes it’s the lack of information that does not allow people to support or be aware of what is going on in the world of female sport.

I also try to do school visits whenever I get the opportunity, promote and lift the profiles of female athletes by inviting them to schools where they can talk about their journeys, their struggles and also their successes because that is the one that we focus on the most. So yeah, that is my little bit that I do.

Are you involved in any youth projects to inspire and motivate the youth?

Yes, I am involved in quite a few youth projects, especially in my hometown – Macassar, where during the month of my birthday in August, I go and spend at least two to three weeks where I do a career day where Grade 11s and 12s are invited along with their parents and we look at various career opportunities, how and where do they apply for bursaries and scholarships.

I then do coaching clinics with coaches and athletes.

“Last year I had Justin Gatlin, who did a motivational talk as well as coaching clinic.” – Former Olympian and SA sprint queen, Geraldine Pillay

In December, I take a group of athletes from Refilwe out in Cullinan about 30km out of Pretoria, and we go on a week-long camp. The focus is not just athletics, but we also focus on the nutritional, psychological, physiological and the educational sides of it.

The Olympics has been postponed due to COVID-19 which gives athletes more time to prepare, however under restrictions that force them to do so in confined spaces. What advice would you give to them to remain positive?

I really think that the postponement of the Tokyo Games has been a blessing in disguise. If you look at athletes that have been struggling with injuries, at least now they have a longer period to prepare for the Olympic Games.

“I see it as a dream delayed and not a dream denied, and that gives the athletes more drive to stay motivated and to train.” – Former Olympian and SA sprint queen, Geraldine Pillay

Also, they must use this time to really focus on the little things. Sometimes all you want to do is get on track, run fast, jump high and jump far and we don’t take care of our bodies and our nutrition, now is the time to pay more attention to detail.

I’ve also seen that athletes have become extremely creative in staying fit and healthy mentally as well as physically. I just want to tell them not to see this as the end, just see this as an extension, as a longer road to Tokyo and when July 2021 comes, we are going to have stronger, fitter and healthier athletes.

Photo 1 Caption: Former South African sprinter and Olympian, Geraldine Pillay, is actively giving back to her community by hosting coaching clinics to inspire the next generation. Photo: Geraldine Pillay

Photo 2 Caption: Pillay, who specialised in the 100 and 200 metre races, competed at various African Championships, two Olympic and Commonwealth Games, has been sharing her knowledge and experience to groom the youth in her hometown of Macassar. Photo: Geraldine Pillay