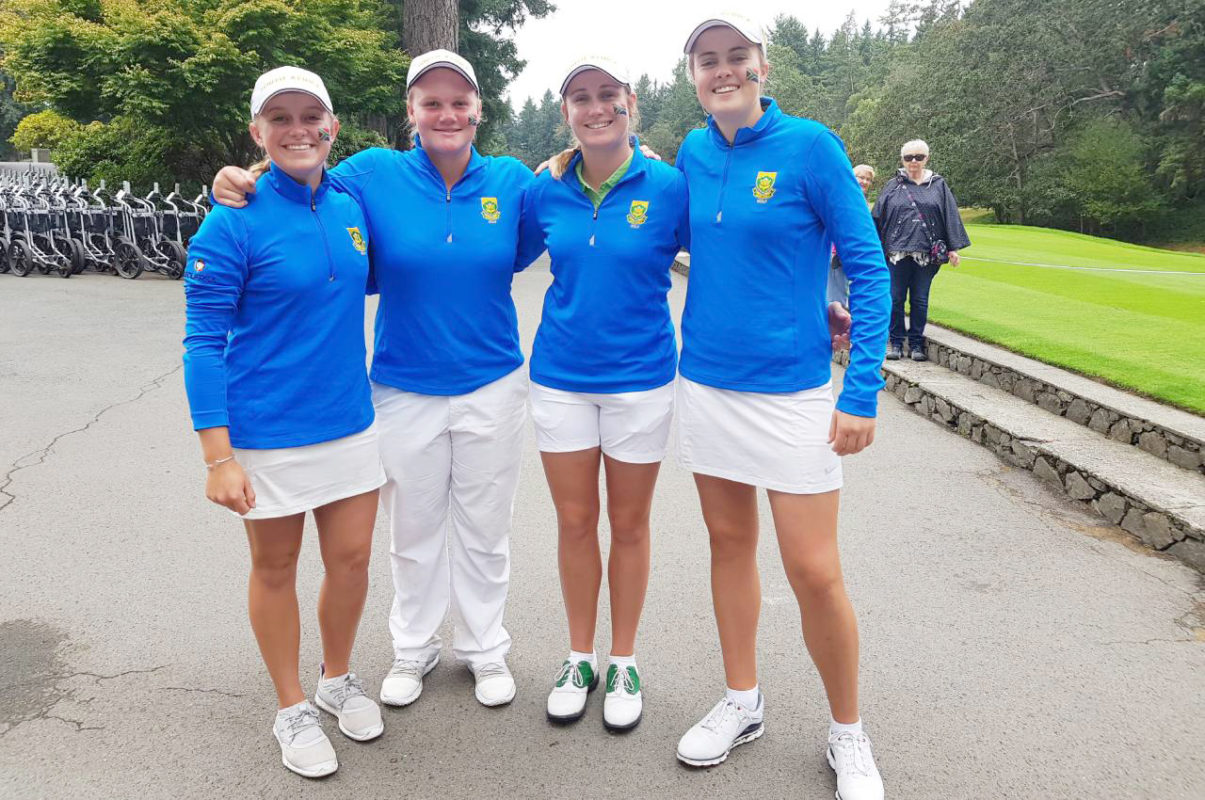 The GolfRSA Proteas routed Canada 5 – 1 to win their final match on Sunday and moved into a tie for second in the quadrennial championship, however, the team had to wait for the final round matches to play out on Monday before the celebrations could begin.

New Zealand lifted the title for the first time with 3.5 points, and South Africa shared the runner-up spot with Australia and Great Britain and Ireland on two points.

“We are absolutely over the moon with the result and I couldn’t be prouder of the team,” said Womens Golf South Africa President, Sally Greasley.

SA Hold Own against World’s Best

“We played against the defending champions Australia and Great Britain and Ireland in the first two rounds, who have won the Astor Trophy multiple times. We knew the matches would be tight, but the girls did incredibly well to draw against both teams.

“We took the third-round loss against New Zealand on the chin. As expected, it was a very tightly contested match and the girls really did themselves proud against the favourites. Kaleigh and Kiera managed to take one point off the Kiwis in the foursomes. Caitlyn and Kaleigh had narrow losses in the singles, but Kiera and Kaylah managed to halve their games against two tough opponents.

“The team was determined to finish on a high note and came out guns blazing against Canada. The locals came out in numbers to support the home favourites, but our girls drew a lot of applause as they closed out three and two victories in both foursomes’ games.”

“Having won the first hole, they halved the next seven holes before Kiera won the ninth to go 2-up. Mary won 12, 13 and 15 and Kiera was down for the first time in the tournament.

“She rallied with two great approach shots at 16 and 17 to turn things back in her favour and she clinched the game one-up after they halved the 18th in pars. A nail-biting finish but a win that put us on the front foot.”

Williams went out second and she dominated her opponent.

The reigning Nomads SA Girls Rose Bowl champion won the first five holes and took the ninth and 11th, as well. The game was done and dusted by the 12th hole as Williams wrapped up a 7 & 6 win for South Africa.

“Kaleigh battled a balky putter in her game against Noémie Paré and although she halve the first four holes, the Canadian won the next four as Kaleigh’s putter went cold as snow,” Greasley said.

“She managed to win 11, 14 and 15 to pull it back to 1 down but the Canadian popped in a nice birdie on 16 to go 2 up. Kaleigh hit a great drive down 17 and holed a two-footer after a good approach and was 1-down going down the last. The pair halved the 18th and Canada got the win.

“We knew the win was in the bag and we all went to support Caitlyn on the back nine, who was involved in a tense tussle with the Canadian number one, Brooke Rivers. Cat turned 3-up, but the back-nine was like a tennis-match, going back and forth. Brook won 10, Cat won 11, Brook won 12 and Cat won 13. After halving the 14th, Brook won 15 but Cat won the 16th to win the game.”

Team Turnout to Support Mcnab with Win in the Bag

Macnab was delighted with the team’s performance and her own three and two victory.

“We played really solid golf. Canada really well, but we just made a lot more birdies. We had all played 10 rounds by the time we faced the Canadians and we were all a little tired and stiff, but we stuck it out and pulled it out of the bag when it mattered most. I am super proud of all the players and the way we all rallied until the final putt dropped.”

Greasley applauded the organisers on a very well-organised event.

“It was really a fantastic tournament. The event was run with great efficiency and managed very professionally and graciously by Golf Canada,” she said.

“The members of Royal Colwood Golf Club came out in their droves to act as caddies, markers, spotters, scorers or just to spectate and they were very non-partial. They gave all five countries great support and we are enormously grateful and very impressed by their enthusiasm to cheer on all players on the course.

“I am supremely proud of our GolfRSA Proteas. They played with their hearts on their sleeves for their country and won the admiration of many spectators.  They were always gracious, kind and played all their matches with humility and grace.

“South Africa should be proud of our young players, who do not share the international experience of so many of this year’s participants. They showed that they are most definitely a force to be reckoned with over the course of this championship,” she concluded.

Since the inception of the Astor Trophy in 1959, South Africa’s previous best performances were third place finishes in 2007 at Royal Johannesburg and Kensington and in 2011 at Fairhaven Golf Club in England.