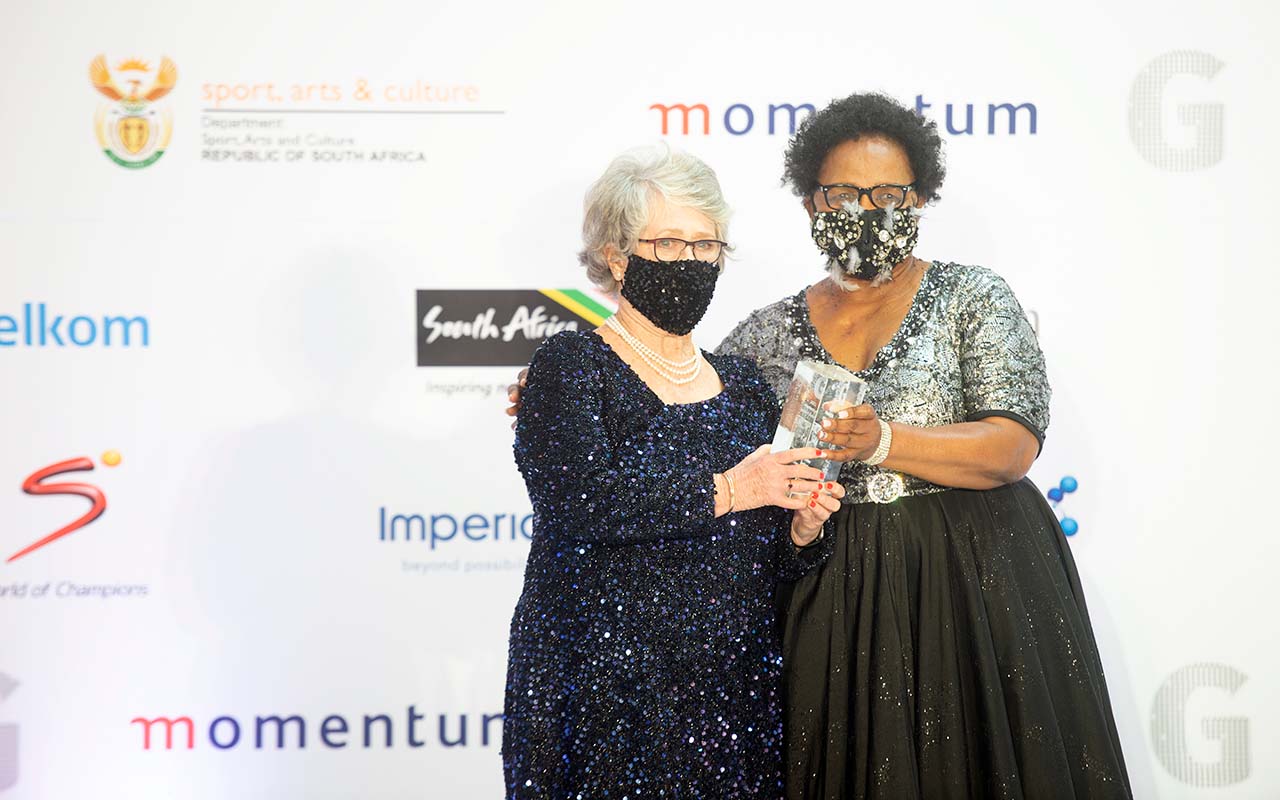 Veteran sports journalist, Jane Bramley, has been honoured for her outstanding contributions to the sport industry as she was inducted into the gsport Hall of Fame at the 2021 Momentum gsport Awards on Tuesday, 31 August.

For the last 25 years, Bramley has been at the forefront using her voice and resources to ensure that women in sport receives the recognition they deserve.

Her written work appearing both online and in print, Bramley has played a significant role in amplifying the coverage of Netball and women’s athletics with her immense knowledge and articulation.

At 76, Bramley has broken barriers to pave the way for the next generation of female writers to own their space in the sport industry.

She advises women who aspire to become sports journalists to not be discouraged by the challenges that may come their way but to keep plugging to ensure that they make their mark.

Speaking with Celine Abrahams, Bramley shares her views on the growth of the Momentum gsport Awards and the importance of paying tribute to women in sport.

Jane, thank you so much for chatting to us! Firstly, congratulations on being inducted into the gsport Hall of Fame! What does this recognition mean to you?

I feel very honoured to have been inducted into the gsport Hall of Fame. The last 25 years of my career I have been involved in sport in one way or another and sport has been very good to me. It is gratifying to be recognised and to know that my efforts to promote women in sport have been acknowledged.

What are your views on the Momentum gsport Awards and how the platform has developed since 2006?

The Momentum gsport Awards have grown exponentially since the first awards in 2006, where a handful of us gathered for a (very delicious) tea party at the Westcliff Hotel.

I really admire Kass Naidoo’s drive and determination to make the Awards relevant and to bring them to public attention. The Awards have become an important fixture on the calendar.

I wasn’t at the Awards last year, but I was very impressed at the way Kass and Ryk Meiring worked their way around the Covid-19 restrictions to make this year’s Awards possible. I think the winners loved the experience of being dressed for the occasion – I wore a dress I would never have bought and several of the others said the same thing as we shed our glamorous outfits and returned to our everyday selves. It also made us feel special to be made up professionally so that we looked our very best.

I think the Awards are sought after by people in the sports industry because of the recognition they bring to the winners.

What does the power of recognition mean to you?

At 76,  I am at a stage in my career where I have very little to prove. These days I only report on SPAR netball (i.e. the national team and the national championships) and SPAR road running. But, it is really good to have been recognised for years of hard work.

Why do you think it is important for platforms such as gsport to pay tribute to women like yourself, who have paved the way for many of us to get into the sport industry?

I think the recognition of women who have made a difference in their careers encourages younger women to keep striving. The Hall of Fame has recognised a wide variety of women, from Olympic champions to administrators to journalists. I think what we all have in common is the belief that women in sport deserve recognition and the determination to make sure they get that recognition.

What do you think of the current state of women’s sport coverage in South Africa and how can we improve it?

The coverage of women in sport has improved considerably in the 25 years since I first started in sports journalism, but there is no room for complacency. Men’s sports continue to dominate the sports pages of the newspapers. Even a major sport like netball – the second biggest sport in South Africa, after soccer, and by far the biggest women’s sport – tends to be overlooked.  Companies like SPAR, Momentum, Sasol and Telkom have done a lot to improve the situation, often by paying for transport and accommodation, so that journalists are able to cover events.

In some cases the women’s teams are far more successful than the men’s teams – cricket and soccer spring to mind – but even so,  the men’s teams are more likely to be supported and reported on than the women’s teams. But there have been good moments – when the Proteas netball team reached the semi-finals of the Netball World Cup in Liverpool for the first time since 1995, the photo on the back page of the Sunday newspaper was bigger than the rugby photo. A moment to remember!

What advice would you share with young women in sport media?

What I would say to young women starting out in sports journalism is not to be disheartened but to just keep plugging away. When I was appointed Sports Editor at SABC Radio News in 1995, it was something of a novelty although Janet Whitton was Sports Editor at 702 at the time. Now, if you listen to various radio stations, there are many women sports reporters. When I first reported on cricket, eyebrows were raised because I was a woman. Now there are a number of female cricket commentators, here and overseas. I believe that the more women go into sports reporting, the better the chance of women’s sports and women in sport being given the recognition they deserve.

What are some of your career highlights that motivate you to continue making a positive impact in sport?

I had many highlights in my years of sports reporting – following the Springboks on their bus ride through Johannesburg after they won the 1995 Rugby World Cup – the journey was supposed to take an hour and actually took about four, because of the masses that turned out to cheer; the 438 cricket match at the Wanderers, when the Proteas beat Australia after the visitors had broken the world record for a one-day international; two Netball World Cups, in Singapore and Sydney; watching Frank Fredericks run a sub-10 second 100 metres at the Johannesburg Athletics Stadium; meeting Michael Johnson and Marian Jones (it broke my heart when she admitted to having taken performance enhancing drugs); seeing the way South Africa took Caster Semenya to their hearts when the athletics world turned on her.

But mostly, I have made many friends in the sports world and I have had a lot of  fun.

Photo 1 Caption: Veteran sports journalist, Jane Bramley, honoured for her outstanding contributions to the sport industry as she was inducted into the gsport Hall of Fame at the 2021 Momentum gsport Awards on Tuesday, 31 August. Photo: gsport