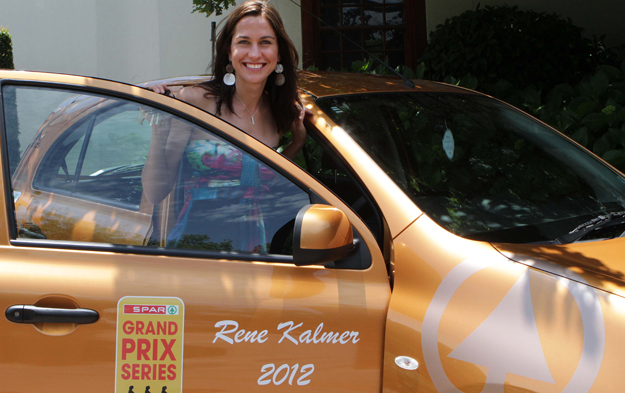 Road-running queen Rene Kalmer has won the SPAR Grand Prix for the third time, winning herself her dream prize.

Kalmer’s victories in Cape Town, Port Elizabeth, Durban and Pretoria gave her 110 points and put her in a position where she could not be overtaken on the Grand Prix ladder. Her Grand Prix prize is a new Nissan Micra.

She had hoped to become the first person to make a clean sweep of all five SPAR Women’s Challenge races, but had to withdraw from the Johannesburg race because of an Achilles tendon injury, which put her out of action for at least two weeks. “I was bitterly disappointed that I couldn’t run, but at least I had made sure of my position on the Grand Prix ladder,” said Kalmer. “It has always been my dream to win a car. When I heard that this year’s prize was a car, I made up my mind that I was going to be the one to take that car home.”

Her Grand Prix win is the culmination of a year in which Kalmer has dominated women’s road running in South Africa. “I’ve had an awesome 2012,” she said. “Now I’m looking forward to another good year in 2013. I’m especially looking forward to the world championships in Moscow in August – I’ve never been there, and so that will be a great adventure.”

2010 and 2011 Grand Prix winner, Irvette van Zyl (formerly Van Blerk), won the Joburg Challenge race in 34.34 minutes to clinch second place on the Grand Prix ladder, with 74 points. She receives prize money of R30 000. “I was in fourth position on the ladder, so I’m very excited that I was able to move up into second place,” said Van Zyl after the Joburg race.

Annie Bothma won the junior category with 13 points, Janene Carey pipped Boxer teammate Ronel Thomas at the post with 28 points to 24 in the veterans’ category, and Grace de Oliviera won the masters’ category with 20 points. The evergreen Sonja Laxton, who has run 76 SPAR Women’s Challenges, won the grandmasters’ prize with 30 points.