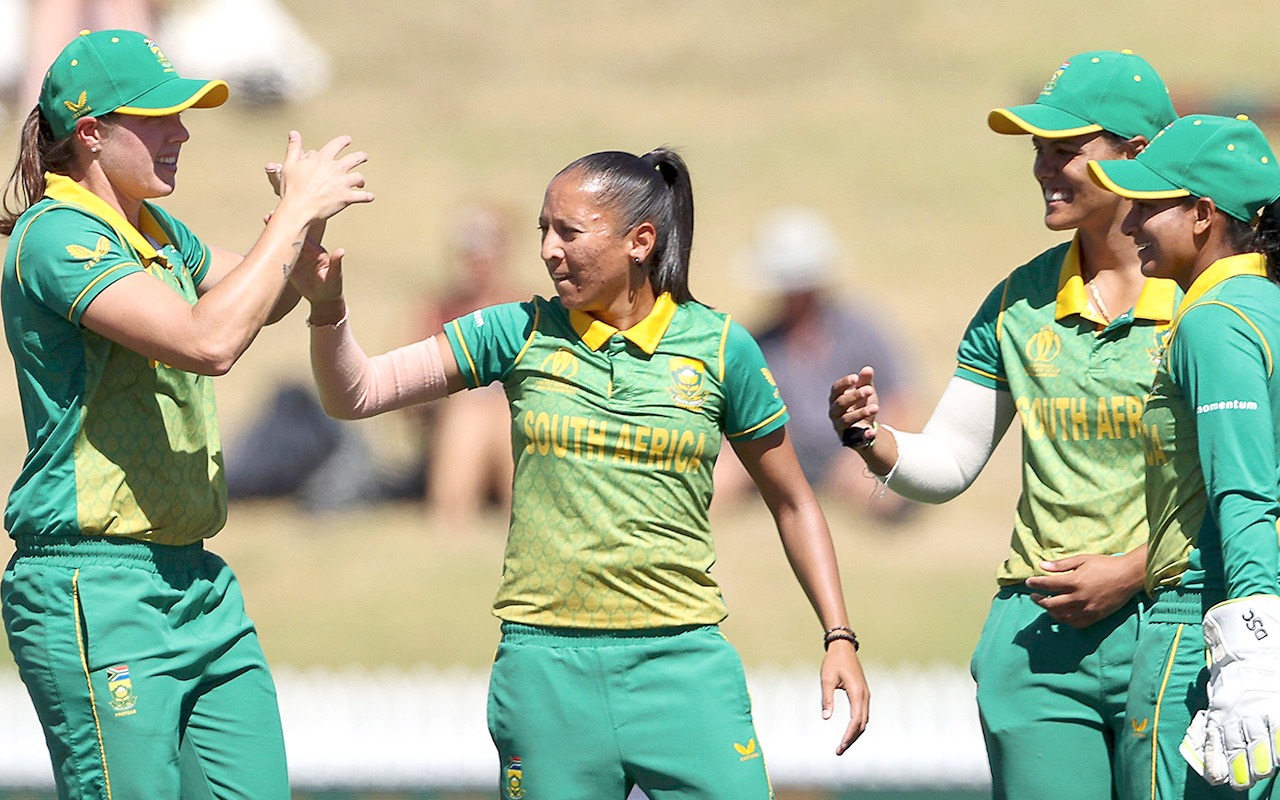 Marizanne Kapp produced yet another all-round performance to take her team to victory against New Zealand in the ICC Women’s Cricket World Cup.

Kapp came to South Africa’s rescue with the bat yet again as she remained unbeaten on 34 in a crunch chase against hosts New Zealand.

She walked in to bat at 166/4 and despite wickets falling regularly at the other end, held her nerve to consolidate South Africa’s position in the points table, they are at No.2 with a net run-rate (+0.226) slightly less than table-toppers Australia (+1.744).

Chasing 229, Lizelle Lee and Wolvaardt started positively for South Africa. Lee, who hadn’t lived up to the billing in the tournament, looked in good touch before calamity struck. A bit of hesitation in running between the wickets and the greed for the third run cost Lee her wicket, as she was found just short of her crease.

The wicket helped New Zealand put the brakes on the scoring. It was a bit of a struggle for Tazmin Brits initially but Wolvaardt kept finding the boundaries to keep the run rate in check. Brits finally broke the shackles in Amelia Kerr’s first over with two consecutive boundaries to get going.

Just when it looked like the two batters were set, Amelia Kerr’s guile got the better of Brits. Dancing down the track, she was beaten by the spin and Katey Martin behind the stumps had all the time in the world to whip off the bails.

Wolvaardt was lucky on a couple of occasions with a dropped catch and almost dragging on to her own stumps but along with skipper Sune Luus, kept the chase on track. At the halfway stage, South Africa were 105/2, still 124 runs away from a win.

Wolvaardt’s sublime tournament with the bat continued, as she brought up her third consecutive fifty with a four. It looked like South Africa were cruising to victory with the partnership of Wolvaardt and Luus before Amelia Kerr worked her magic. She trapped Wolvaardt leg before wicket for 67 and scalped Mignon du Preez in her next over, thanks to a sharp catch from Martin behind the stumps.

Hannah Rowe landed a body blow to South Africa with the wicket of skipper Luus, who departed after her fifty.

The game ebbed and flowed in the final 10 overs with both teams wrestling control of the game. Frances Mackay ended the sixth-wicket stand of 28 runs between Chloe Tryon and Kapp with the former holing out in the deep in the 46th over. Kapp, however, smashed two boundaries in the next to bring it down to run-a-ball in the final three overs.

Mackay scalped Trisha Chetty and Devine rattled the stumps of Shabnim Ismail in consecutive overs to bring another twist in the tale but Kapp’s boundary off the penultimate ball of the 49th over brought the equation down to six off the final six.

Kapp smoked a four off the very first ball and trusted Ayabonga Khaka to win it for them by taking a single off the next. Khaka took a quick single to win it for her team with three balls to spare.

Earlier in the day, New Zealand posted a competitive score of 228 at Seddon Park, thanks to Sophie Devine’s brilliant knock of 93. The White Ferns skipper may have narrowly missed out on her second century of the tournament but did enough to post a challenging target for South Africa.

Devine’s 101-ball innings included 12 fours and one massive six, as her partnership of 81 with Amelia Kerr (42) and 80 with Maddy Green (30) formed the backbone of the New Zealand innings.

But Devine’s dismissal in the 41st over led to a late collapse, with the tournament hosts losing their final six wickets for just 30 runs to be all out in the 48th over.

Seamers Ayabonga Khaka (3/31), Shabnim Ismail (3/27) and Marizanne Kapp (2/44) led the way with the ball for the Proteas, who are attempting to remain unbeaten at the tournament and a win here will edge them closer to cementing a spot in the semi-finals.

Devine lost fellow opener Suzie Bates (4) in the third over as the hosts were reduced to 6/1, but Kerr joined her captain as the pair set about resurrecting the early damage.

The duo looked solid and put on 81 for the second wicket, until South Africa captain Luus (1/48) intervened with the big wicket of Kerr.

Luus had the New Zealand number three trapped LBW for 42 and experienced batter Amy Satterthwaite (1) fell in the next over to Khaka as the Proteas quickly gained the upper hand.

Devine then fell to a lovely Khaka yorker and the rot then fell in as South Africa cleaned up the New Zealand tail to ensure their victory target would not be too high.