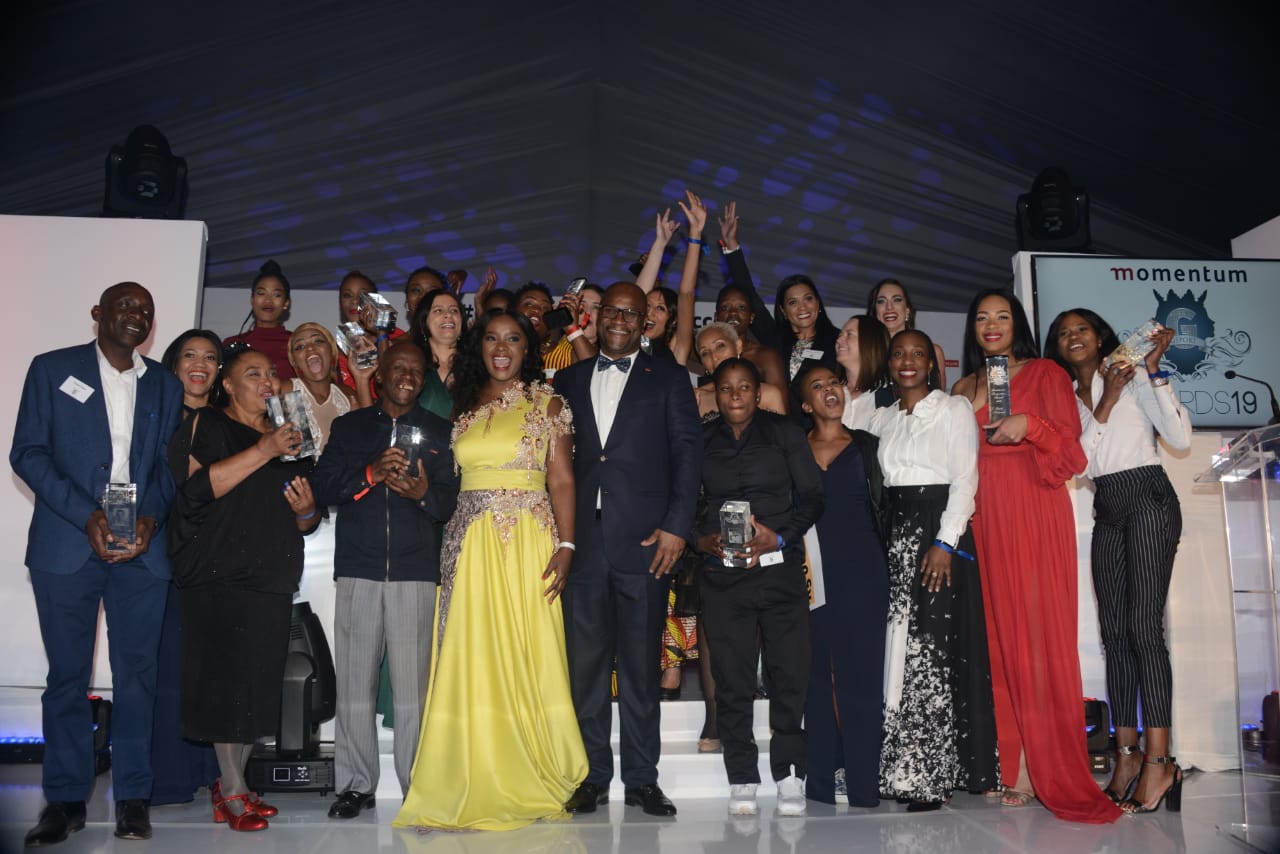 Women in sport boldly claimed their success on the 2019 Momentum gsport Awards stage as twenty-five new winners were unveiled at the country’s longest running women’s sport awards on Saturday night.

It was double joy for the national women’s football team as star player, Thembi Kgatlana, stormed to victory to win Momentum Athlete of the Year, beating off stiff competition from Caster Semenya and Gerda Steyn, and Banyana Banyana winning the Big Five Duty Free Team of the Year award on the same night.

SA wheelchair supremo, Kgothatso Montjane, continues to reign supreme winning a fourth Athlete of the Year with Disability Award, in addition to the Albertina Sisulu Special Recognition Award she was honoured with in 2018.

The youngest of the 54 finalists, eight-year-old chess whiz, Minentle Miya – away on international duty in China and represented by her mom Sophy, scooped the School Sports Star of the Year Award, presented by Gauteng Sport, Arts, Culture and Recreation.

Saray Khumalo – who became the first Black African woman to summit Mount Everest in May this year, won a fiercely contested  Woman of the Year category to cap a magnificent year, while combat Tang Soo Do black belt instructor and aspirant astrophysicist Tanita Ramburuth-Hurt won the Special Recognition Award for her work to promote women in sport.

Supersport anchor, Lindiwe Dube, took top honours in the Estee Lauder Style Star of the Year category, as she continues to rise confidently in the world of sports broadcasting.

The Women in Media categories are hugely popular and this year was not different with four new winners taking to the stage. First, in the Woman in Print category, Linda Moreotsene emerged victorious, while Lee-Ann Mpofu won the Woman in Social Media award. Varsity Sport PR Manager Marisa Calvert was named Woman in PR and Sponsorship while North West FM’s Karabo Mokgalagadi won Vision View Woman in Radio, and ENCA’s Hloni Mtimkulu was crowned Brand SA Woman in TV.

Women’s empowerment leader Wiphold was named Worldwide Sports Sponsor of the Year for pioneering work in the field of women’s sport sponsorship while passionate sports volunteer Anet Bosman won the Brand SA Supporter of the Year for her selfless service to disability sport.

Though the national team’s World Cup exploits was outside of the performance window for the 2019 Momentum gsport Awards, Netball South Africa scooped Federation of the Year while community sports coach, Maria Diamond was named Volunteer of the Year.

Over 16 000 public votes were cast overall and ultimately the Public Choice award was won by double finalist on the night, Xoli Zondo.

One of the biggest cheers of the night went to anti-apartheid athletics hero, Odessa Swarts, who was inducted into the gsport Hall of Fame for her enduring journey in athletics.