Letago Madiba Continues to Dominate on the European Stage 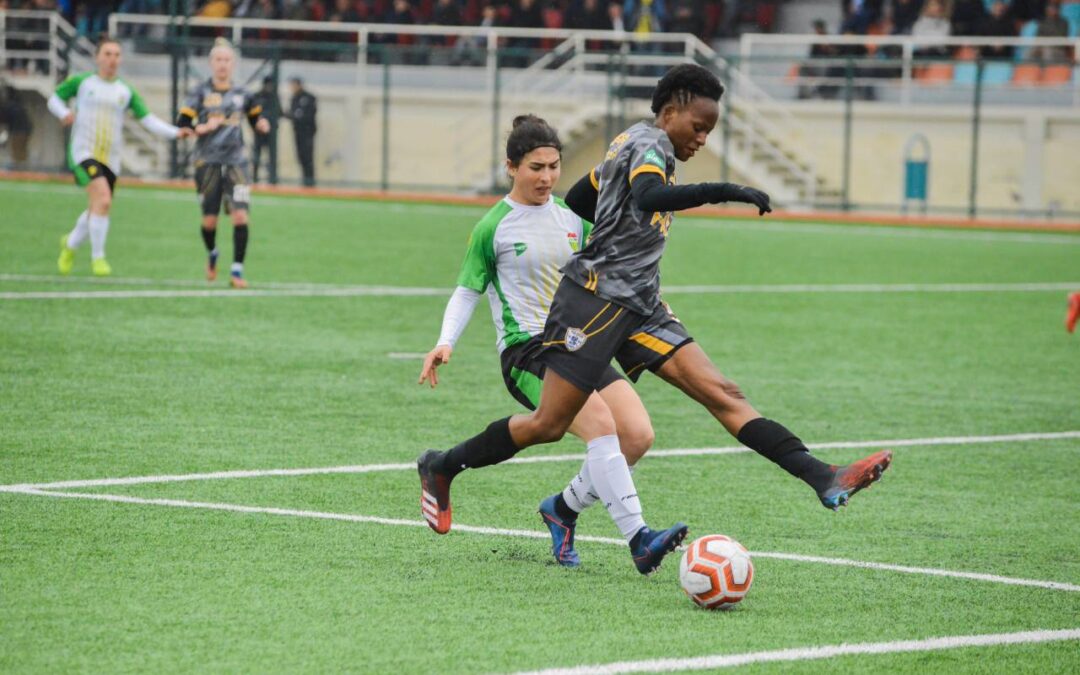 South African footballer, Letago Madiba, has earned the right to be in high spirits as her contributions to ALG Spor led the team to their maiden Turkish Kadinlar Ligi title.

A product of TUT Ladies, Letago, together with fellow South African, Rachel Sebati, represented the country well with dominant performances, seeing them move from Minsk in the Belarusian League to Gaziantep in 2019. Madiba finished the season with 12 goals and 7 assists in 14 matches.

The star forward has been silently making a name for herself on the international scene and it is a mystery how a player of her calibre was not selected to represent Banyana Banyana at the 2018 Africa Women’s Cup of Nations in Ghana and the 2019 FIFA Women’s World Cup in France.

Madiba, however, has certainly not let the lack of national team call-up’s deter her. She continues to ride her own wave in Europe.

gsport caught up Madiba as she gears up for her second UEFA Women’s Champions League for stint.

Letago, congratulations on recently winning ALG Spor’s maiden Turkish Kadinlar Ligi title. How does it feel to be part of the team’s history?

Thank you very much! Honestly, I am overwhelmed by the blessings that God has constantly provided. When we arrived in Gaziantep, ALG was an ambitious team having only been promoted to the 1st division in 2017/2018 season. To have been a part of the first team to win the national championship and qualifying for Europe is an honour and a privilege.

You have played a massive role since joining the team last year (2019), scoring 12 goals and providing 7 assists in 14 matches. What has the season been like in terms of adjusting at the club and the league?

When we arrived in Turkey, we had just come from being in-season at Minsk playing UEFA Women’s Champions League, so we were coming from a high intensity and then having to lower it to pre-season. Adapting to the different style of play took some time as in Turkey they do not play the same style as in Belarus. But I really started to flourish midway through the season. The club was very accommodative and friendly, and we felt at home very quickly.

As you pointed out, this victory means that you will have the opportunity to participate in the UEFA Women’s Champions League again. Please tell us about your first-ever experience with Minsk.

“The entire process is very professional and an eye opener for a player like us coming from a country where women’s football is not professional. I am looking forward to returning to the competition for the new season and hopefully we are able to help our club to greater success.” – South African international footballer, Letago Sebati.

The UWCL is probably the best club competition in the world for both men and women. It is only a blessing that I was able to compete in the competition and score. Minsk prepared very well for the competition as can be seen by qualifying for the last 16 only to be knocked out by Barcelona. The entire process is very professional and an eye opener for a player like us coming from a country where women’s football is not professional. I am looking forward to returning to the competition for the new season and hopefully we can help our club to greater success.

Yourself and Rachel Sebati seem to be joined at the hip. What is it like sharing your journies together?

Being with Rachel throughout my professional football journey is only a blessing from God. I cannot go into too much personal detail, but our paths are continuously joined by God taking us places together. I am so thankful to have her by my side, we do not allow one another to be put down and we always encourage one another. Coming from TUT together, we were friends, but not close. We have developed such a great understanding and I am excited for what is to come.

You’ve managed to successfully do what many of your South African male counterparts have not been able to do and that is secure a sustainable career abroad, take us through how it all came about.

My manager was put in contact by an agent looking for players for Minsk’s UWCL campaign. My manager then put three names forward, being myself, Rachel and another player who unfortunately decided not to go due to studies and her employment. It all happened very quickly, within two weeks of first being in contact with the agent, we were already flying out to Minsk to join the team. It was a risk we had to make, as we did not have much time to arrange our studies and current life. The rest is history as they say ?

There big European feats always start with a measly dream right? Where does Letago’s passion for football come from?

I grew up in a home with four older brothers who would play football. My brother Karabo took an interest to teach me the basics and skills. And, from a young age I played football with the community boys which led to me being the only female playing in school.

What have been some of your biggest challenges in your career so far?

“I had to undergo two surgeries which kept me out of football for 14 months. This period was difficult, the rehab was hard and watching my teammates from the side-line was not easy.” – Madiba speaks on the challenges in her career so far.

My lowest point was when I tore my ACL, MCL and meniscus during a National Team Camp in 2014 just before the African Women’s Championship. I had to undergo two surgeries which kept me out of football for 14 months. This period was difficult, the rehab was hard and watching my teammates from the side-line was not easy. But, looking back, I am so thankful for the experience, I believe this moment made me work harder for my dreams.

We are seeing many South African female footballers signing contracts with international clubs. What are your thoughts on this and how it will impact our national team?

It is extremely exciting! I think we are entering into a period where more players will be given the opportunity but to be honest, we need to get the younger players out into Europe to benefit the national teams.

Draw for us the parallels of football for women here in SA and abroad. Also, what are you hoping to see change in South Africa?

Having experienced two different leagues and the UWCL, South Africa is far behind with the basics. Basics, in terms of simple things such as uniform, usage of facilities, time management, training programmes, technical staff etc. I do believe Sasol has done so much for women’s football and I’m grateful to be a product of the Sasol League, but I encourage teams to be more professional and not leave it up to others. Once we show this, it’s up to SAFA to do more to get corporates to come on board and sponsor a professional league where female players get paid and are treated with respect.

Women’s football in the world is still experiencing many challenges but in South Africa we must not focus on what female footballers in Europe or USA are fighting for. We need to identify our own challenges and start small before we can compare our leagues and challenges with the world.

What are your greatest football ambitions?

Just over a year ago, I was on the brink of retiring from football to seek employment until I was given the opportunity to train in Spain and got the offer from Minsk a few months later. I’ve achieved the dream of playing professionally in Europe and have exceeded this by winning league and cup titles and competing in the UWCL. My only wish is to enter the coming season with greater strength to help my club win the league and perform in the UWCL. 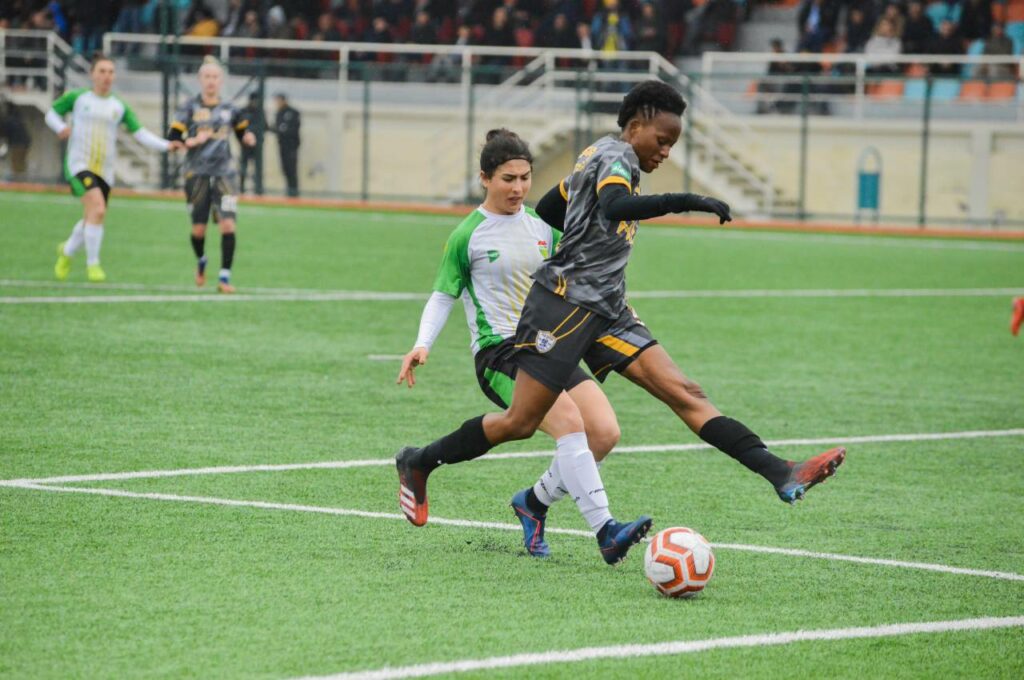 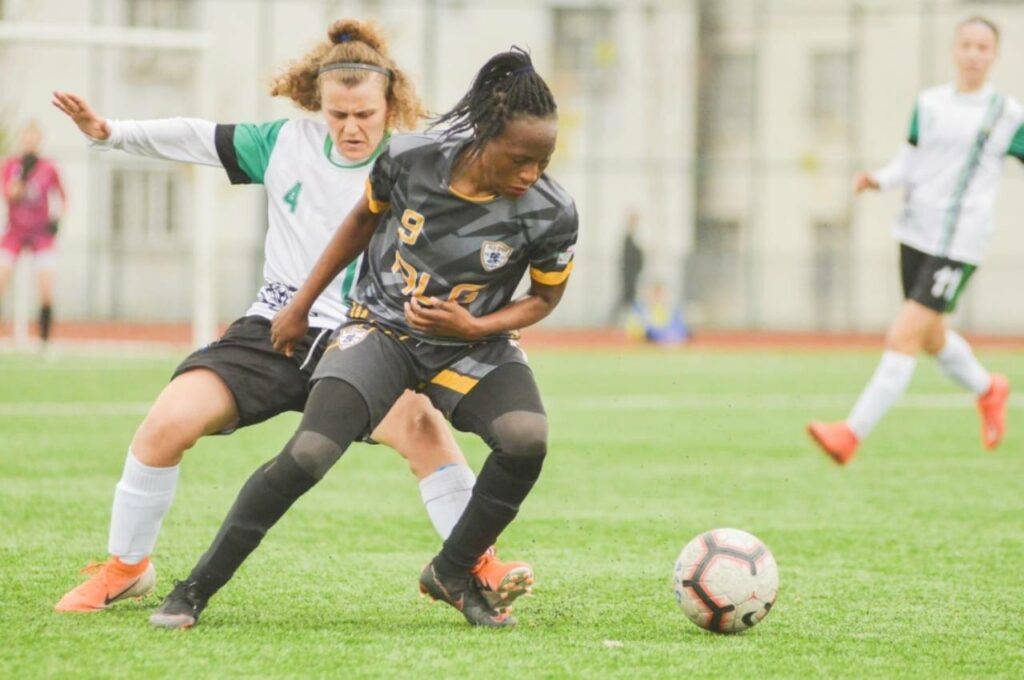