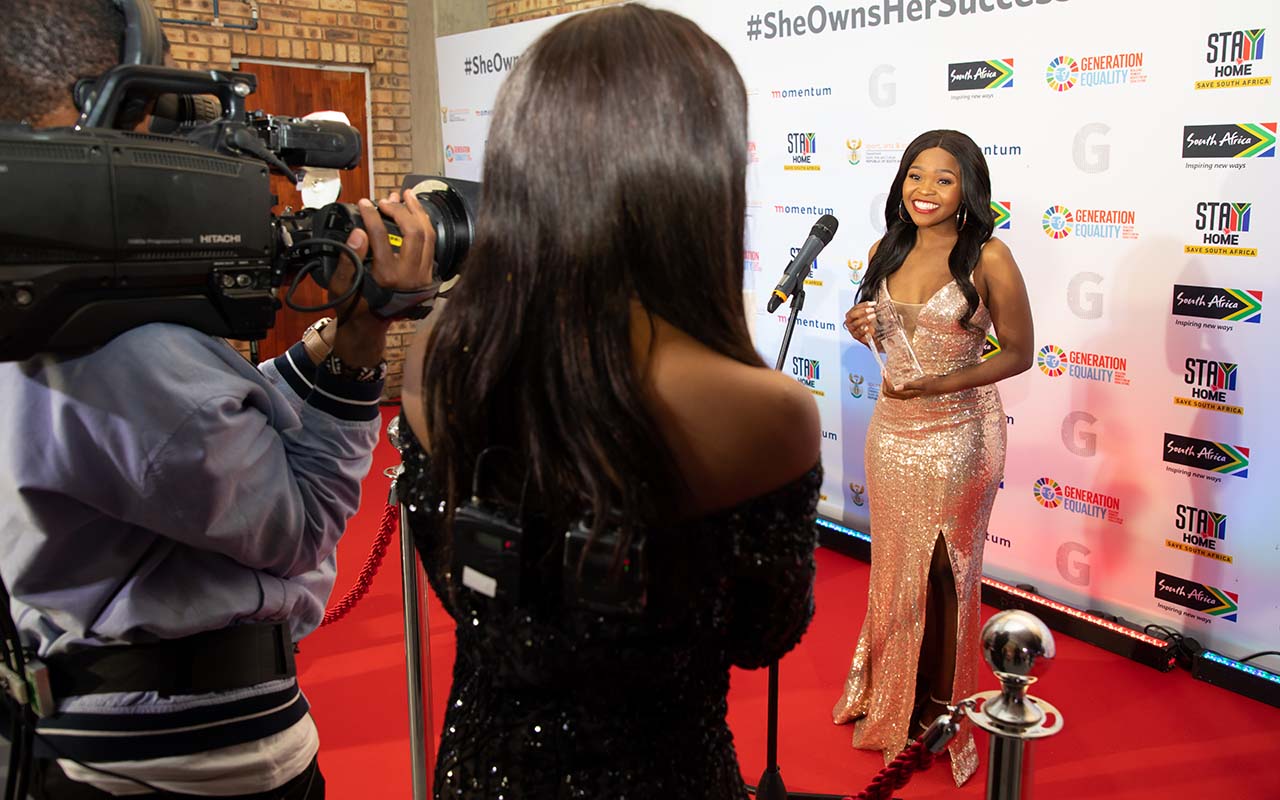 Radio 2000s Nthabiseng Mamabolo makes a second consecutive appearance for the Woman in Radio award as she is joined by EWN’s Cato Louw, and Ukhozi FM’s Thulisile Miya for the 16th annual Momentum gsport Awards.

Radio is one of the biggest media platforms in the forefront of telling stories and profiling the amazing work being done by athletes, sponsors and administrators in the sporting fraternity. These broadcasters utilize their platforms to positively drive impact in the journeys of women in sport.

Cato Louw has been consistent in the ever-evolving sports broadcasting industry. She has been defying stereotypes for the past 9 years since becoming one of South Africa’s youngest female sports broadcasters. Louw is also one of the youngest female rugby anchors on SuperSport and the voice behind the Eyewitness News (EWN) sports bulletins on KFM and Cape Talk.

“It feels absolutely awesome to be a finalist for the Momentum gsport Woman in Radio award. I have been following the category and the awards since my days at Campus radio back in 2014. It’s always been a goal of mine to be a finalist in this category because the main reason of me getting into sport broadcasting was to always profile women in sport and to be recognized by the platform that shares the same sentiments as I do is just plain awesome.

“It’s been a tough year for sports, more so for women in sport, everything has taken a back seat because of the pandemic, and everyone has really been fighting to stay alive and afloat. Working in an industry that is always on 24/7 has been quite the light at the end of a tunnel for many. And because there wasn’t so much live sport taking place I was privileged to be a part of the EWN team that decided to reflect on historic moments in sport, we covered stories that took people back to great and historic sporting moments that the country has experienced.

“I had an opportunity to speak and profile many women in sport whose journeys are so inspiring. Last year the Momentum gsport Awards hosted such a glitz and glam event mid pandemic and these are pockets of greatness that we need to hold dear to. The awards have been here for over a decade and I had an opportunity to attend the awards as media a few years ago and what I experienced was life changing. Let’s continue rallying behind women in sport and for us as media, it’s important to be intentional about the news we put out there, especially when speaking of achievements recorded by our athletes,” said the ever-enthusiastic Louw.

Making it as a finalist for the second-year running is Radio 2000’s Nthabiseng Mamabolo. Mamabolo is an advocate for women’s sport and goes above and beyond to include and profile women in her work on national radio station – every Saturday and Sunday. From her days as a hockey player in high school to the start of her broadcasting career on Campus Radio, to Regional Commercial Radio and now Radio 2000, she has always made sure that whatever she does has a positive impact on women in sport. Not only does she afford interview opportunities, she makes sure to include women’s sport stories from different provinces across the country to women making strides and breaking boundaries internationally in her bulletins.

Mamabolo believes that making it as finalist for the second year running means her efforts are paying off: “I am so excited to be a part of this edition of the #gsport16 awards, not only because the Momentum gsport Awards are the biggest platform celebrating women in sport in South Africa, but also for the amount of doors that might be opened up by me making it as a finalist for this category.

“I am now a two-time finalist in the woman in radio category and that for me is quite a big deal. This means that the work I put in on national radio weekend in and weekend out is making a difference and inspiring others to do the same. I’m grateful to the panel of judges for seeing my job and giving me the nod. I have enjoyed covering stories like reporting on the Netball 2023 World Cup preparations for South Africa, Thembi Kgatlana and other women in football signing for some of the biggest football clubs in the world and covering women making amazing moves at the Olympics. It’s also so amazing to see sponsors coming out in numbers to back women in sports fully, we have come a long way and we are doing well.”

Ukhozi FM’s Thulisile Miya is the only female football commentator who covers all Premier Soccer League matches and international games for both Banyana Banyana and Bafana Bafana. She has covered the 2014 and 2018 FIFA World Cup tournaments, as well as the 2016 Euro Championships. She currently covers the Hollywoodbets Super League show on the station every Monday, profiling teams and players.

Miya had this to say about being a #gsport16 finalist: “I feel so honoured and grateful to be chosen as one of the finalists this year. Truly speaking I wasn’t expecting it. This nomination means a lot to me, actually it is something I will forever be grateful for in my radio career and to be in a category with the people I have so much respect for, and it is really special.

“We’ve had a challenging year because we had to adjust to the new normal because of Covid19, but my standout moments for the past year of course has got to be on the commentary booth midweek and weekends covering PSL matches throughout the season, and of course commentating the Soweto Derby. I want say thank you to the Momentum gsport Awards for being a pioneer behind women in sport in our country over the years, we really appreciate your efforts. Please continue with the wonderful work that you do. We really appreciate the impact this has had on the careers of many women in sport.”