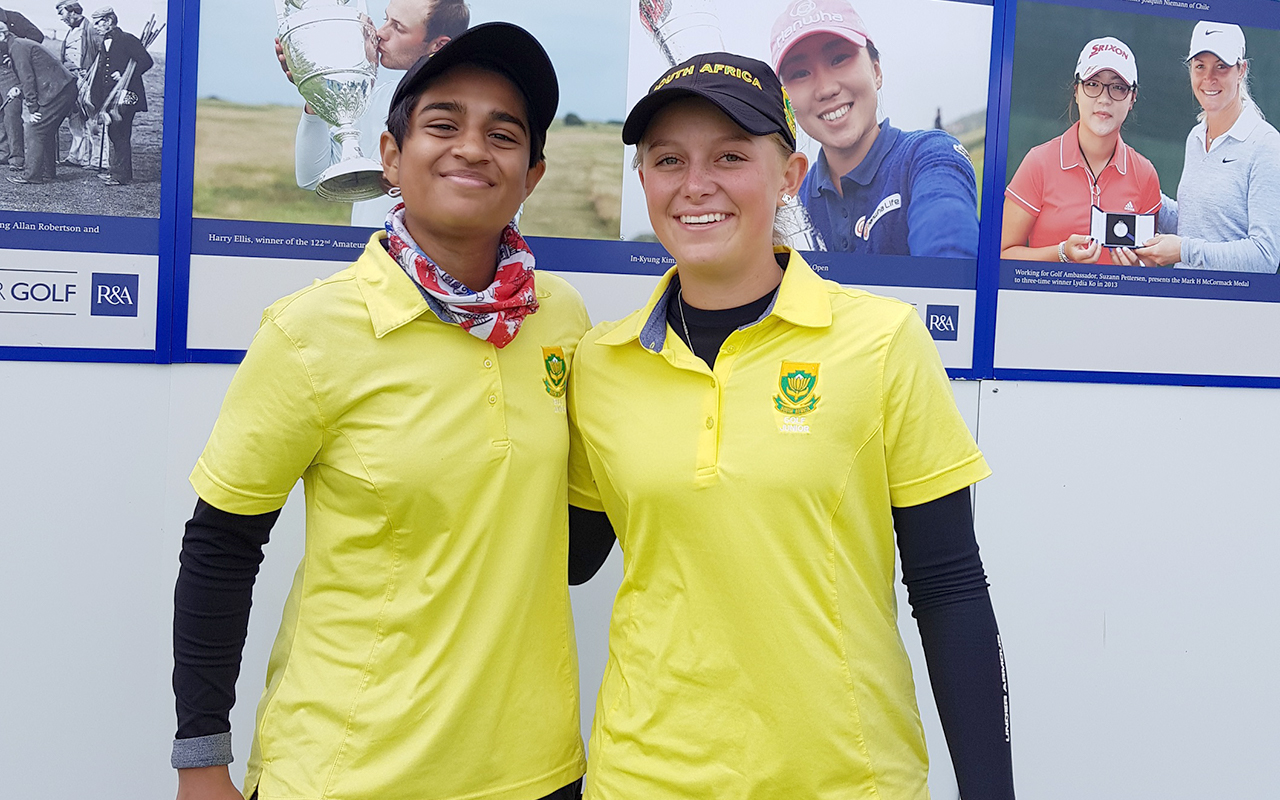 Macnab and Mistry Cruise into Match Play in Ireland

Sweden’s Ingrid Lindblad won the qualifier on three-under, but the day belonged to 16-year-old Macnab, who fired seven birdies for a superb three-under 67 at the County Down links.

For a second successive day, the Ekurhuleni junior got off to a birdie start.

She gave shots back at five and seven, but a birdie at the par three eighth delivered a big punch of confidence, so much so that not even a double bogey at the par five 11th could dent in her self-assurance.

“That birdie got a little fist-pump,” laughed Macnab.

“After the double bogey at eight in the first round, I was a little frazzled. Coming back with a birdie was the best revenge.” – GolfRSA Elite Squad member Caitlyn Macnab

Macnab had to reload at 11 after the crosswind swept her ball in the Irish Sea.

“We had to drive into a crosswind towards the sea. The wind got hold of my ball and dumped it out-of-bounds. I went back, hit a 3-wood down the fairway and another 3-wood from 233 metres and two-putted from a sandy lie.

“I hit fairways and greens all day and my putter was on fire. I had seven one-putts down the back. It was a pity about the double at 11, but it didn’t upset me at all. I had a really good rhythm and I kept it going. I executed the shots exactly as I planned them and I put it close on so many holes. Most of my putts on the back nine were inside 10 feet.”

Macnab’s 67 earned her a share of third on one-over and a first round date with local lass Leah Temple Lang, who finished on 13-over.

“To shoot three-under in those tough conditions was incredible and if I can produce that kind of golf in the match play I’ve got a chance. Match play is very different to stroke play and depending on what happens, you have to keep adjusting your strategy,” said the Serengeti golfer.

There was some worry in the GolfRSA camp after Mistry finished. She languished near the top 60 mark on 10-over after battling to a 77, but as the scored filtered in, the Randpark golfer rocketed to a tie for 30th.

“We thought we had it bad with our late tee time on day one, but it was already blowing 45 km an hour when we started in the morning,” – GolfRSA Elite Squad member Kajal Mistry.

“I just hit too many wayward drives and missed a lot of putts, especially on the front nine,” said the 17-year-old Mistry. “I turned five-over after doubles at five and six and I really pleased with the two birdies on the back. I stuck it to a foot at 11 and chipped it to a couple of inches at 18.”

The Crawford College matriculant has played a limited schedule this year,but she has lost none of the competitive spirit that saw her dominate the Open and Junior Rankings in 2016 and 2017.

“I am going up against a girl from England (Martha Lewis) in the first round. I love match play, although I haven’t played many matches this year, but I’m rearing to go. Hopefully I can put some pressure on her early on and get past the next hurdle,” she said.

Womens Golf South Africa President Sally Greasly was delighted with the way the two girls handled themselves on such a big stage in extremely challenging conditions.

“I was once again so proud of the way the girls played yesterday.” – Womens Golf South Africa President Sally Greasly.

“As the locals say, if you can see the Mountains of Morne, the rain is on its way; if you can’t see them, it is already raining! Within 15 minutes of teeing off the rain came in and it was very cold. The wind blew a gale and the course played very tough.

“Although the sun came out on their back nine, the very strong wind dried out the greens. Any ball landing on those greens was likely to run right through, or worse still, be taken by the wind into a bunker. The pins were in interesting but not too difficult positions.

“Caitlyn looked so comfortable out there, despite the fact that they started in gale force wind. Kajal had another tough day, but despite errant tee shots and missed putts, you couldn’t tell how her game was going.

“There are 67 coaches from various US colleges here this week and Caitlyn is definitely on their radar. At one time I counted 22 coaches around the green as she approached, but it was great to see that it didn’t faze her at all.

“I am extremely lucky to be travelling with these two girls.  They are delightful to be with, great ambassadors for South Africa and immensely grateful for the opportunity GolfRSA and WGSA has given them.” – Sally Greasly.