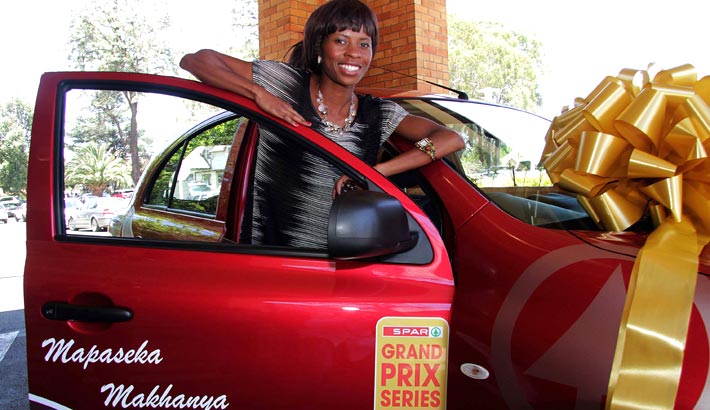 Mapaseka Makhanya has been around the athletics scene for some time, but 2013 has been a stellar year for her, culminating in her victory in the SPAR Grand Prix, after taking up road running this year to build up stamina, and get used to running longer distances.

Although Makhanya has never made a secret of her preference for running on the track, she took to road running like a duck to water, and as a result, the bubbly single mother gathered enough Grand Prix points to finish the year well on top of the Grand Prix ladder.

She started the year by coming second in the Cape Town SPAR Women’s Challenge race and third in Port Elizabeth. She romped to victory in Durban, and had a record-breaking victory in Pretoria.

By this stage, she had built up enough points to make it virtually impossible for anyone to overtake her, and although she finished out of the top ten in the final race in Johannesburg in October, the Bonitas (formerly Transnet) runner had done enough to ensure that the keys to the first prize of a new Nissan Micra would be handed over to her.

Makhanya was overjoyed when she took possession of the car at a breakfast at the Wanderers Club on Tuesday. “I have a car, but it is quite old and needs money spent on it, so it is a huge thrill to be driving away in a brand new car,” she enthused.

“I have really enjoyed running in the SPAR races – the vibe is always great, and I have started getting used to having to think in kilometres instead of metres.  This has been a great year – I won the Grand Prix, and I ran and won my first marathon. Next year I plan on winning another car, and have asked for leather interiors,” she laughed.

Three-times Grand Prix winner, Rene Kalmer, finished second on the log, with 92 points – 13 behind Makhanya.  Kalmer’s sister Christine was third with 77.  Rene will receive R30 000 and Christine will pocket R17 500.

Their Nedbank Gauteng Central teammate Irvette van Zyl, who was unable to run in Johannesburg because of a knee injury, came fourth, with 68 points. The two-times Grand Prix winner will receive R15 000.

Annie Bothma of Helderberg Harriers won the Junior Grand Prix, with 20 points. Boxer KZN’s Janene Carey won the Veterans category, with 26 points, teammate Grace de Oliviera the Grandmasters category with 48 points, and the evergreen Sonja Laxton the Grandmasters, with 30 points.  They will each receive R3 500.

With five of the top 10 on the SPAR Grand Prix ladder wearing the Nedbank Central Gauteng colours, the club easily won the club competition, with 343 points – nearly double those of their nearest rivals, Boxer KZN, who had 177. Transnet were third, with 138 points.

Rene Kalmer, who has won more SPAR Challenge races than anyone else, said the introduction of the Grand Prix had done much for the development and improvement of road running in South Africa. “Before the Grand Prix, you just did your best to try to win the race, and you weren’t too concerned about times,” she said.

“But now that you get bonus points for beating your previous time, it means that finishing times have gone down significantly. You can’t afford to relax any more, in case someone overtakes you.

“There is real competition now,” continued Kalmer, “And I can assure you that Mapaseka won’t have it all her own way next year! We’ll all be doing everything we can to beat her and claim the car ourselves.”