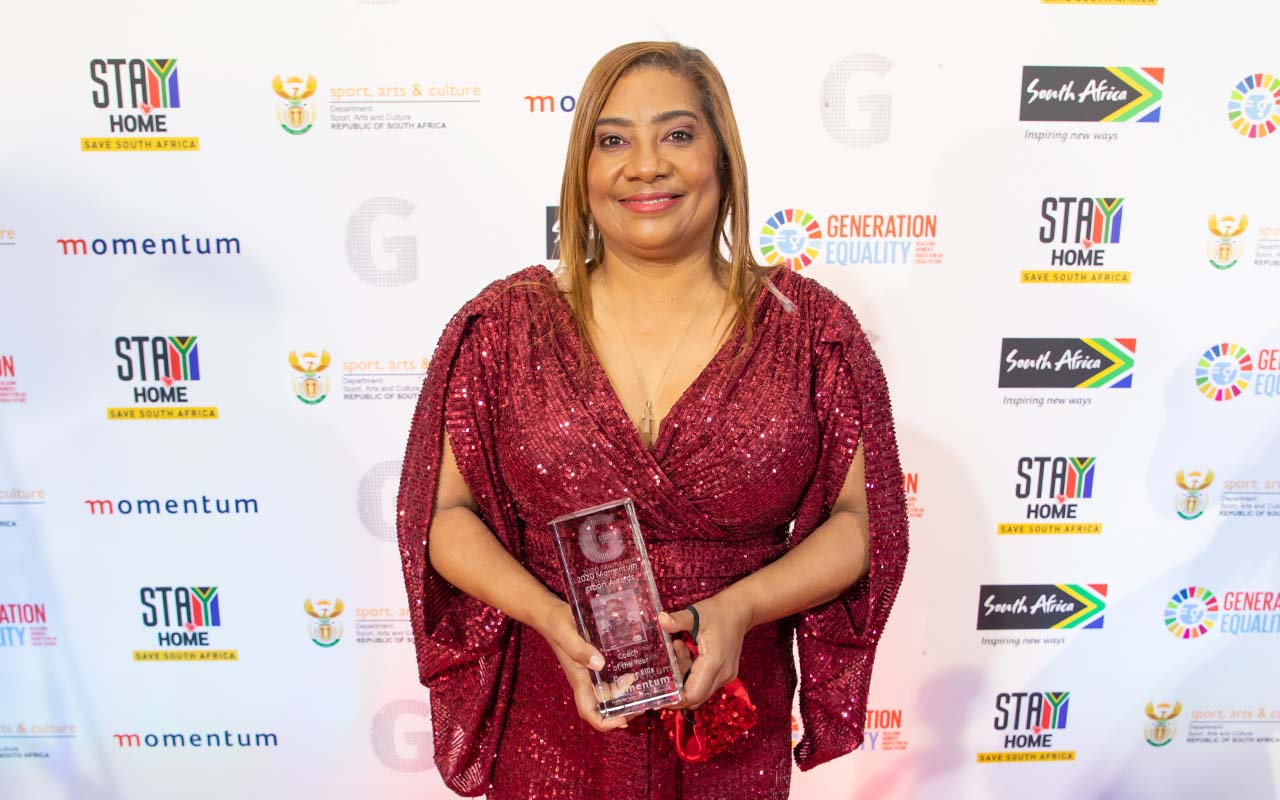 Mentoor says she cannot believe how life changing the past year has been.

“Being a finalist for the Coach of the Year category is such a blessing. I feel so honoured to be a finalist alongside some of the best coaches in the country. I have had a life-changing year. With all the sacrifices and the hard work that I have done I am just so grateful that my work is being seen and it’s being recognized. Some of my best highlights has to be going to the Olympics in Tokyo with the first ever female water polo team to represent the African continent where I found out I am the first ever female coach at the Olympics for the water polo sport, that was life changing for me in so many ways.

“I am so glad we have platforms like the Momentum gsport Awards that are always ready to elevate our stories and achievements. Women are generally incredible human beings, imagine how women perform when they are celebrated and acknowledged for the remarkable work that they do, and these awards do exactly that.”

Jenny van Dyk led the Gauteng Jaguars to their seventh appearance in a final and fourth successive Telkom Netball league title in 2020. Not only has she dominated in challenging circumstances but has been one of the most consistent coaches in netball. Van Dyk continued her accumulations of titles with the Tshwane Senior Ladies A team at the SPAR National Championships in December where she claimed a fourth title in a row. She says she is grateful that her passion is seen through results and also accolades like being a finalist for the Coach of the Year award.

“I am so thankful that my passion is visible and the results speak volumes. It is also such an honour to be recognized on platforms like the Momentum gsport Awards, platforms that don’t only celebrate the wins we record on the courts but our overall contribution to the sporting industry. South Africa has an abundance of talented women in sport, from athletes, coaches, administrators, journalists, broadcasters and women in media. The Awards are the one place where all of us can celebrate each other. I am a passion driven individual, everything I do is driven by passion and purpose and this is why my dedication to netball can never be something I measure, however being a finalist for these awards is an accolade I will proudly take charge of.

“We have had a lot of challenges due to the pandemic but one thing about women in sport is that they will conquer and win despite the trials and tribulations. I am currently training and coaching young women whose passion exceeds the challenges we are encountering, they show up with determination and willing to put in their best performances everyday. Being a finalist means I can continue to inspire a lot of young women to really consider careers in coach and in the sporting industry as a whole. I dedicate this to them, my win is their win. Congratulations to everyone who is a finalist and to the incredible women in my category, we all deserve this and may we continue to celebrate each other.”

Ilse Pelser has achieved remarkable results with the SA gymnastics team. She is an Olympic coach whose pride comes from making vital contributions to the growth of women gymnasts in the country. She is widely known for the incredible work she has done with South Africa’s first ever artistic gymnasts to qualify for the Olympic games, Caitlin Rooskrantz and Naveen Daries. Pelser is proud of what her team achieved at the Olympic Games in Tokyo and is also grateful to see so many of her Olympic family among the list of finalists for the 16th Momentum gsport Awards.

On being named as a finalist, this is what she had to say: “It’s an absolute honour to be one of the finalists for the Coach of the Year award. It has been quite a tough year to navigate through COVID and the many obstacles it presented, it really wasn’t easy for the athletes and everyone to stay motivated. With the Olympic games being moved from 2020 to 2021, a lot of what we do really needed some careful management and it was definitely not an easy road. Despite it all I am so grateful to be here today.

“I’m so grateful to be able to say one of the highlights of my entire career so far was going to the Olympics for the first time as coach to one of the two gymnasts that qualified for the Tokyo Olympics. These two women, Caitlyn and Naveen are so incredible and have such a great and bright futures ahead of them. They are already looking forward to the commonwealth games in 2022 and the next Olympics in Paris. This means that the hard work we put it is about to be tripled and we are so motivated. We are also motivated by this recognition by The Momentum gsport Awards. The work that Momentum and gsport are doing is so impactful and hugely motivational. I know from previous winners that these awards inspire you and other women in sport to want to keep doing a good job and get better at all times.”

You can catch the latest women’s sport news in the Momentum powered gsport Newsroom and register a free membership at the gsport website to cast your vote for your leading woman in sport here.

Photo caption: The battle is on as SA women’s water polo team head coach, Delaine Mentoor, Gauteng Jaguars coach, Jenny van Dyk, and Gymnastics South Africa coach, Ilse Pelser, vie for top honours in the gsport Coach of the Year category at the 2021 Momentum gsport Awards. In this photo, Banyana Banyana Head receives her Coach of the Year award after winning the highest honour in Johannesburg, on 31 August, 2021. Photo: Momentum