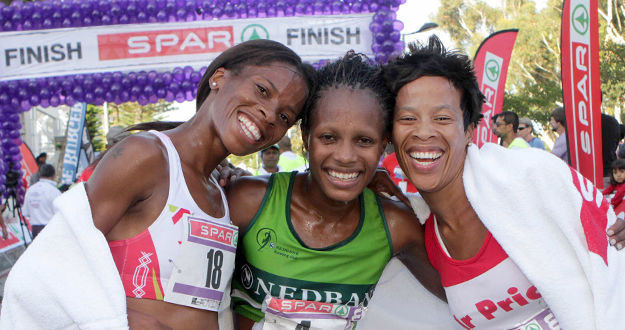 Zimbabwean Rutendo Nyahora (Nedbank) stormed to victory in the SPAR Women’s 10 Km Challenge at the Cape Town Stadium in Greenpoint on Sunday, with Mapaseka Makhanya of Transnet finishing second ahead of Zintle Xiniwe (Maxed Elite).

It was a first time Challenge victory for Nyahora, who went into the lead at the start and stayed a good distance ahead of her rivals throughout the race.

“This is one of my best wins,” said Nyahora. “It’s a great start to the year, and I think this is going to be my year.” Nyahora, who finished second in Cape Town last year, said she had felt comfortable throughout the race.

“I thought it was going to be harder than it was,” she said. “Normally, I look around and see where people like Rene (Kalmer) and Irvette (Van Zyl) are, but this time I decided to run my own race and not to worry about them. I told myself to just go, and I had a strong mind today.

“Mapaseka (Makhanya) was my target – she beat me about two weeks ago, and I was worried about her. So I just went ahead and didn’t look back.”

Makhanya, who was running the Cape Town leg of the Challenge for the first time, said she had not known what to expect, but she had found the route very easy. She moved into second position after five kilometres.

“I ran with Irvette for the first five kilometres, but then she fell back and I just went ahead. I liked the route – I didn’t even feel the hills,” she said.

Makhanya is scheduled to run in the World Cross Country championships in Poland next weekend.

Defending champion Rene Kalmer, running her first competitive race after a five-month lay-off because of an Achilles tendon injury, was fourth.

“I’m not disappointed. I’m very satisfied with my performance today,” she said. “I had a good run and it was great to be back on the road competing again. But Rutendo and the others must watch out – I’ll be back at my best in the next Challenge in Port Elizabeth in May.”