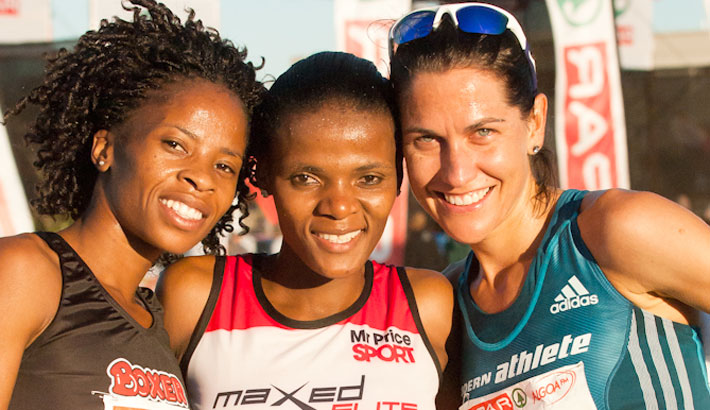 Rene Kalmer finished second, in 33.27, and last year’s Grand Prix winner, Mapaseka Makhanya was third in 33.28. Ethiopian runner Hunduma Gemeda, who was second in the Cape Town race, was fourth, in 33.35.

Phalula made her break early in the race, after running in a group led by two Ethiopian runners, Gemeda and Chelity Asefa, for the first two kilometres.

“I was feeling very motivated and I decided to get away from the others,” said Phalula. “I just kept going and I didn’t look back. The weather was good for running and I felt very relaxed,” she said.

Phalula said she believed the improvement in her times was a result of training with men. “They motivate me, and I’m training very hard,” she said.

Phalula said she was aiming to secure a place in the South African team for the Commonwealth Games, running the 5000m and the 800m.

Silver medallist Kalmer said she was very happy with her second place. “After coming eighth in Cape Town, I’m just pleased to be back in the top three,” she said. “The Ethiopians started very fast, so I just decided to run my own race,” said Kalmer.

“I tried to keep within striking distance of the leaders, but Lebo was just too strong for us today.”

“Lebo ran a great race,” said 2013 SPAR Grand Prix champ Makhanya. “It was my third competitive road race this year, and I just want to carry on. The more you race, the more competitive you become.

Makhanya also has her sights set on the Commonwealth Games, while Kalmer is to travel to the United States to run a number of races there.

With two victories under her belt, Phalula is now well on her way to securing the SPAR Grand Prix and the first prize of a new Nissan Micra.