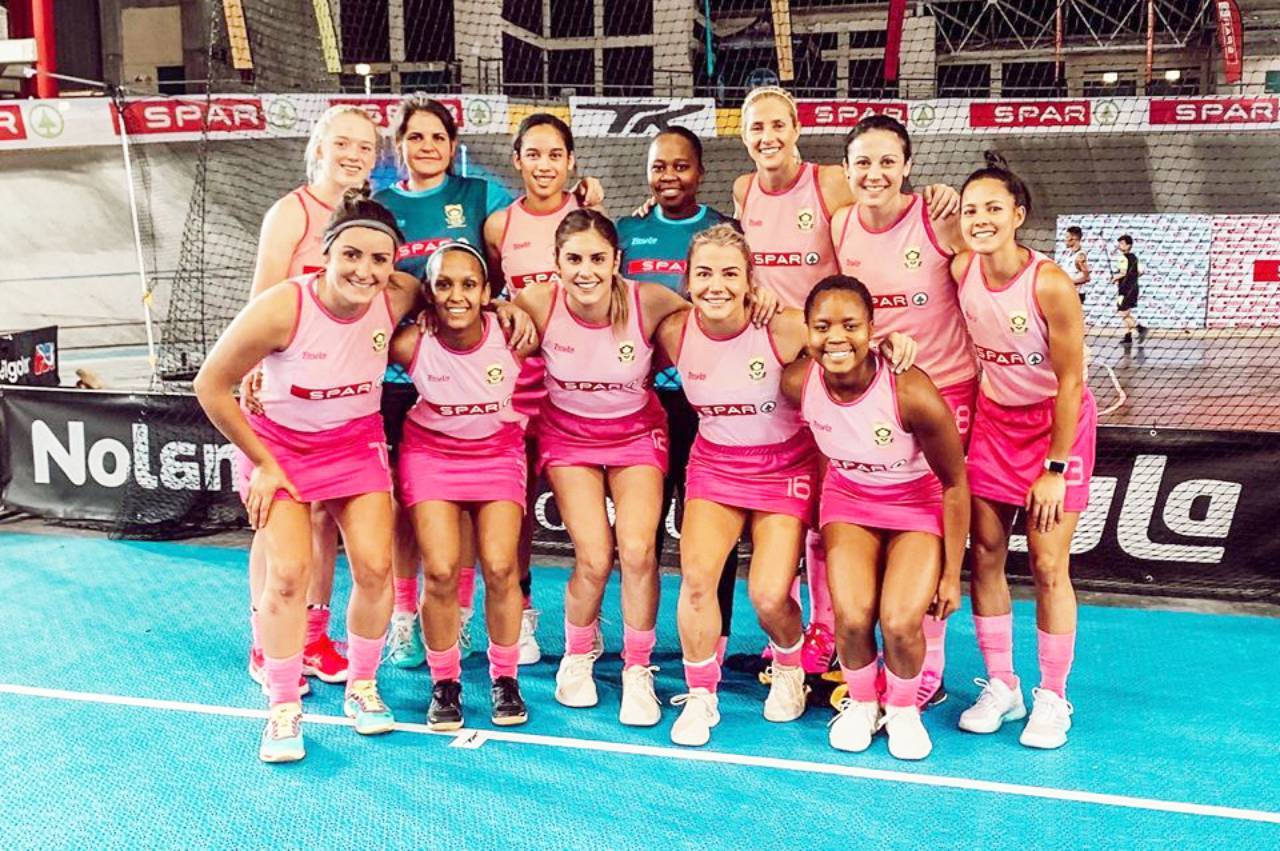 The sixth and final test of the SPAR Indoor Series between South Africa and Ireland was played on Tuesday night, 10 December 2019, at the Bellville Velodrome.

The two teams who have fought out a fantastic series over five days and two provinces renewed rivalries for one last time. The SPAR South Africa team were all dressed in pink to as in conjunction with SPAR they created an initiative to stand together against gender-based violence. 10 December also marked the final day of the United Nations 16 Days of Activism, with gender-based violence the focus for 2019.

Ahead of the game there was a presentation to the SPAR South Africa captain Cindy Hack who became the first African Hockey player to reach the 100 caps milestone. She received a commemorative trophy from Marissa Langeni, CEO of SA Hockey, and some Proteas from her mother who was wearing a C100 shirt.

The game was played in front of a vociferous crowd at the Bellville Velodrome with the Pro Series National finals taking place at the same time and approximately 2000 people were in attendance for the historic night.

Team SA Prove Their Worth as Ireland Tried to Fight Back

Although the night was all about Cindy Hack and her historic milestone, it was Kayla de Waal who stole the show with her own hat-trick, the third for SPAR South Africa in the series. What is so thrilling was that this was in front of her home crowd in just her second international series for South Africa. The future is bright.

South Africa had earlier opened the scoring through Amy Greaves after a fantastic bit of team play before de Waal got in on the action. Robyn Johnson would also add her fourth of the series before the biggest cheer on the night was reserved for Hack who netted South Africa’s final goal.

For Ireland they got two consolation goals with Sophie Barnwell finishing off a good team move and Amy Benson showing her goalscoring credentials with her fourth of the series and Ireland’s second of the game. Ultimately the South Africans were too good for their European opponents and turn their eye to their Poland tour with a current 20 match unbeaten run under their belt. Their 2019 record will read as played 28, won 22, drew 3 and lost 3.