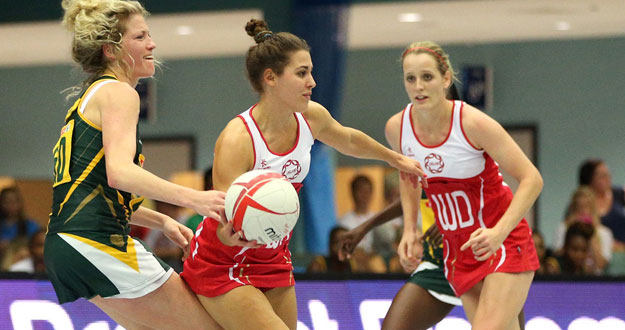 In true South African style the SPAR Proteas bounced back from defeat and played their hearts out in the final test against England in Worcester on Friday. “Our players showed true courage and character on court. They were more comfortable and consistent in their ball placement, losing some of the caution that they had before.”

The England side started off strong, with an emphasis on defence. Melissa Myburgh was given very little room to move as goal keeper Geva Mentor put up a wall in the South African circle. Despite a number of turnover balls from the South African defence – Karla Mostert had a phenomenal game – the SPAR Proteas were unable to capitalise on the opportunities. England led after the first quarter by 16 goals to 7.

The second quarter continued in a similar vein, as both teams had brilliant and poor moments. Maryka Holtzhausen – celebrating her 50th test cap – made some excellent long shots at goal, throwing off her defenders with her left-handed play.

With Holtzhausen providing more support to young goal shooter Myburgh, she was able to gain more confidence as the game drew on and she began to play more of an abrasive game. England led 30-16 at half time.

Bringing in the big guns after half time, England coach Anna Mayes brought on Stacey Francis as goal defence. Elize Kotze also made a number of changes as Bongiwe Msomi replaced Simnikiwe Mdaka on centre and Lindie Lombard stepped up to play wing attack.

Improved communication between South African goal shooters enabled the girls in green and gold to outscore the England side at one stage, but this was short lived, as England went on to score a further 12 goals to the SPAR Proteas 9.

It was the final quarter that showed the true ability of the SPAR Proteas, as they played a brilliant 15 minutes of netball. Precious Mthembu joined Adele Niemand and Karla Mostert on defence, and the ball was driven up court more often.

Playing into the contact faults of England goal keeper Lindsay Keable, the SPAR Proteas scored a number of consecutive goals, eventually outscoring the England side by 5 goals. The final whistle blew at 53-41 to the home side.

“The more our players compete at this level, the better they will get,” said Kotze after the game. “We need to compete, contest and improve, focusing on our conditioning to be able to compete with consistency for 60 minutes.”

The SPAR Proteas will have another opportunity to play the England side, this time on home ground, as they will play a tri-nations against England, and Trinidad and Tobago at the end of October. “We can’t wait,” said coach Kotze, “We will be ready!”