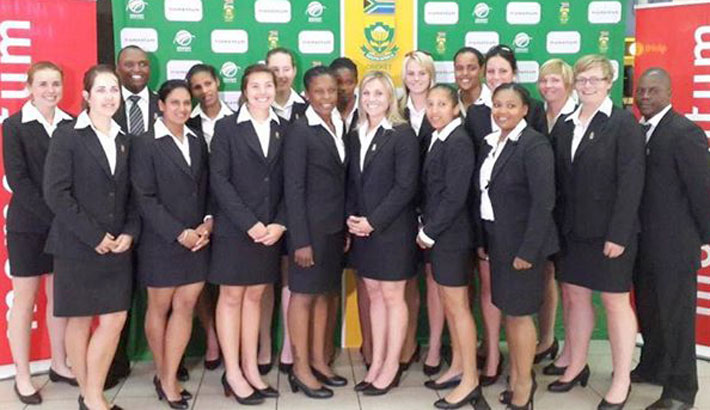 The Momentum Proteas women returned home after a challenging and enlightening tour of England today. The side lost 3-0 in their Twenty20 series against the hosts, but beat Ireland 3-0 in their three-match series of the same format.

Coach, Hilton Moreeng was disappointed in the losses against England, but believes the side have learned some hard lessons as a result.

“It was disappointing to lose the series against England the way that we did,” he said. “There were times when we set ourselves up well, but let the game go or allowed England to overtake us. Out of the three disciplines, the batting needs a bit more work.

“What I loved to see was how we improved as each game passed, not in a small way but in big, positive leaps. I’m a lucky coach, in that I have a highly motivated team, who always stay positive, no matter the situation,” said coach Moreeng.

Captain, Mignon du Preez was also disappointed by the losses against England, but found many positives ahead of the team’s next assignment in Sri Lanka next month.

“I was disappointed in our performance that first game against England because nothing went the way that we planned it. It was definitely not the way we wanted to start our tour, but I was really happy with the way that we improved with each match.

“The last game was also a big disappointment because I believed that we could pull off a win, but England are at the top of their game right now and managed to turn the game around. They are at the end of their season and we are just starting ours, which was the biggest difference between us.”

Another big positive for the team was to have their very first series (against England) broadcast live and also televised at home by SuperSport.

“It definitely wasn’t like at the World T20 where we played our first ever live match, we were well prepared for it this time and we were all so excited to have the folks at home finally watch us play,” du Preez said.

“I think this has done a world of good for the team and the women’s game in South Africa, especially in terms of exposure.”

The series against Ireland saw a more clinical performance from the side. They played a double header and one more match the following day, beating the side convincingly each time. Stand-out performances by the Skipper, Trisha Chetty, Ayabonga Khaka and Suné Luus saw a more ruthless approach toward their developing competitors.

“When we played against Ireland, we were highly motivated to bounce back well,” du Preez continued. “We were all down from the England series and we needed to show ourselves and everyone else that we could come back from the disappointment and, like the professionals that we are, play each new game as it comes and do our utmost best.

“It was great for me as a captain to see such good performances from the youngsters Aya (Khaka) and Sunétjie (Luus), they give us a lot of options during matches and it was also really nice for myself and Trish (Chetty) to put in some good performances as captain and vice-captain,” du Preez concluded.

The team is looking forward to their tour to Sri Lanka next month, where they will play their first matches in the ICC Women’s Championship.

“We have a lot of lessons that we want to action and put right before the upcoming tour,” Moreeng added.

“Sri Lanka are a tough competitor and we are looking forward to implementing everything that we learned. It is a fantastic opportunity for our team to play in different conditions and see how we fair against the hosts, whom we beat when they came to South Africa last year.”

Photo 1 caption: Coach Hilton Moreeng has expressed his pleasure at the manner in which the Momentum Proteas improved with each match during their 6-match away IT20 series against England and Ireland. Pictured is the touring squad ahead of their departure. Photo: Cricket SA on Facebook