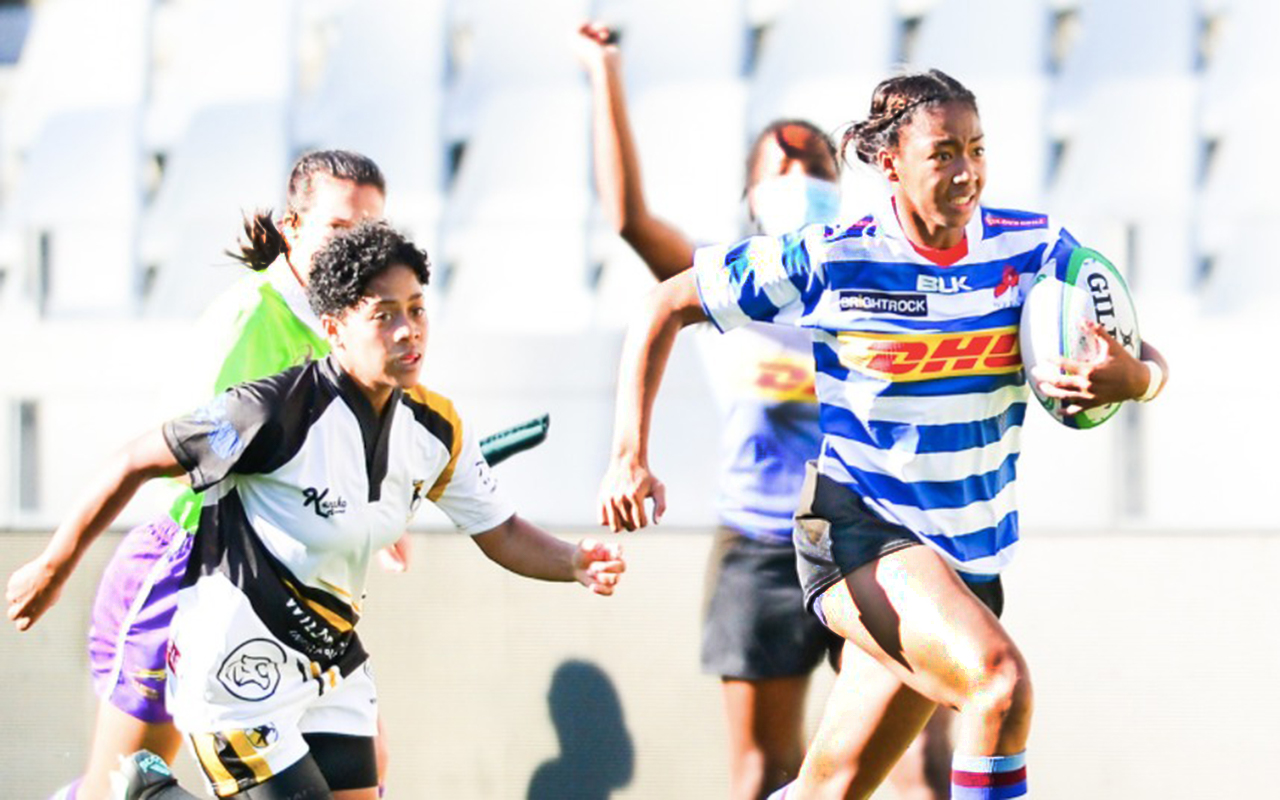 The Women’s Premier Division got off to an exciting start on Saturday, 8 May 2021, with defending champions DHL Western Province scoring a runaway victory, and well-deserved wins by Border Ladies and the EP Queens keeping fans glued to their screens.

DHL Western Province defeated the Boland Dames 38-6 in Cape Town, while Border Ladies secured a 17-11 home win in East London, and the EP Queens registered a 13-5 away-win against the Cell C Sharks Women in Durban.

“Dreams can come true and the historic event of having women’s rugby broadcast live has hopefully served as the necessary vision for young girls in South Africa to see what is possible,” said Springbok Women’s coach Stanley Raubenheimer, who was in attendance at the Cape Town match.

“The fact that we could see ladies perform at this level and giving their best in a showcase to the rest of the country, was a very good starting point.

“Hopefully this will snowball and get even bigger as we continually strive to improve the product that we would like to show the country.”

Raubenheimer added: “It was a great effort from all the players involved and I wish them success for the rest of the competition.”

DHL Western Province showed they will be a force to be reckoned with this season as they ran in an impressive six tries to none against the Boland Dames at the Cape Town Stadium for a comprehensive 38-6 victory.

The Capetonians scored three first-half tries – two of which we scored by Alichia Arries (wing) and the other by Felicia Jacobs (scrumhalf) – and they supported this with solid defence to take an encouraging 19-6 halftime lead.

The hosts applied consistent pressure on attack, and this allowed them to camp in Boland’s half for most of the first stanza, while they restricted their neighbours to only two penalty goals by Demi Nel (centre) for their efforts.

DHL WP picked up where they left off shortly after play resumed with Vuyo Maqholo (fullback) scoring their bonus point try thanks to their effective passing and support play, which extended their lead to 24-6.

The Boland Dames tightened up their defence and managed to contain the home side’s effective attack for a while, but DHL Western Province proved too strong as Donelle Snyders (replacement back) and Sinazo Mcatshulwa (lock) broke through the defence in the last eight minutes to seal the satisfying 38-6 win.

The Border Ladies underlined their class with a fine display as they outscored the Blue Bulls Women by three tries to one and put in a strong defensive display to start their Women’s Premier Division charge with a 17-11 win at Police Park in East London on Saturday.

The home team dominated most of the first half and used their strong runners to great effect, with tries by Lusanda Dumke (flanker) and Yonela Ngxingolo (prop) putting them 10-0 up after 20 minutes.

However, the Blue Bulls Women found their rhythm in the second quarter and gradually came back into the match, but unforced errors cost them as they came close to scoring on a few occasions.

Libbie Janse van Rensburg (flyhalf) had two opportunities to get points on the board and succeeded with one of them, which saw the Border Women take a 10-3 lead at the break.

Janse van Rensburg slotted a brilliantly taken drop-goal early in the second half to close the gap to four points, but the Border Ladies then took advantage of some ill-discipline by the visitors and Aviwe Basana crashed over for their third try in the 49th minute.

The Blue Bulls Women didn’t give up, but strong defence by the team from the Eastern Cape ultimately kept the visitors out until the final minute, when Catha Jacobs (flanker) went over in the corner.

The clash between the Cell C Sharks Women and EP Queens got off to a slow start at Jonsson Kings Park 2 in Durban as the players returned to action for the first time since 2019, with the visitors’ Zenay Jordaan (flyhalf) scoring the first points of the match 17 minutes in compliments of a penalty goal.

The Port Elizabeth side came within inches of scoring a try 10 minutes later, but they were first denied by a desperate tackle and then a costly handling error.

The hosts scored the first try of the match in the 31st minute by Nqobile Mhlangu (winger) thanks to some fantastic passing, which pushed them into a 5-3 lead. But the Queens had the last say before the break with Sibabalwe Nombayeka (hooker) crashing over from a pick-and-go following some strong forward play.

Both sides ran hard on attack in the second half and managed to create try-scoring chances, but they were shut out by the tenacious defence, which resulted in the only points scored being another penalty goal by Jordaan for a 13-5 win.

Click below to read the Season Preview on gsport: