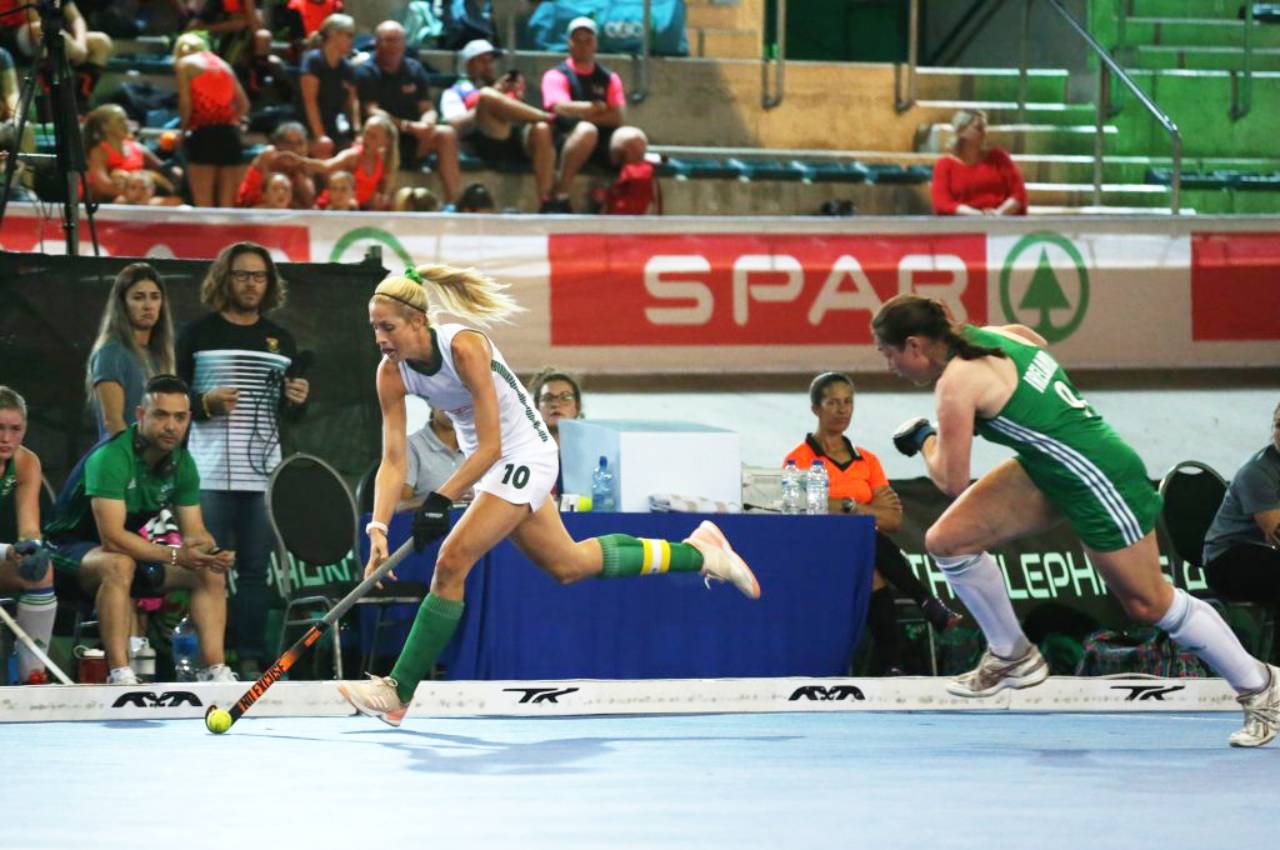 The third test of the SPAR Indoor Series moved to Cape Town and to the Pro Series Indoor at the iconic Bellville Velodrome. The Velodrome that has played host to Kanye West, Kendrick Lamar, the Offspring and Bruce Springsteen previously is no stranger to iconic events and is the perfect host for the first ever indoor hockey series between the South Africans and the Irish.

After two very tight test matches in Durban, the two sides were preparing for an epic battle in front of a packed crowd at the Velodrome. Ireland started well with Zimi Shange forced into an early save an early penalty corner was awarded to the Irish. After Shange repelled the attempt from McKenna South Africa surged forward and got themselves an early goal.

Jessica O’Connor showed her class and danger at the penalty corner time and fired a bullet into the top corner giving Millie Regan no chance. The goal was particularly pleasing for the South Africans after their lack of finishing in the first two tests. SPAR South Africa would get a second before the end of the quarter as Kara Botes completed her own trademark goal from a penalty corner.

The South Africans continued to dictate play with coach Lennie Botha using an uncharacteristic full rotation of players and tactics that left Ireland trying to adapt as they worked out the change in plan. The best was yet to come through for the vociferous crowd backing their home team. Cindy Hack, playing in her 97th test match, produced a stunning moment of individual brilliance. Spotting a gap, the South African captain produced a slalom run that would make Winter Olympians proud and her finish past Regan was full of composure and class. It was a reminder of why Hack is so highly rated around the world and why so many kids look up to her.

Hack would turn provider for Robyn Johnson next. Johnson, playing on her birthday, made a perfect run that Hack picked out and Johnson got the inch perfect touch to guide the ball into the bottom left corner. The goal was a highlight for any sports person and the perfect birthday present for RJ.

Ireland continued to push forward but in Kara Botes, Jess Lardant and Jamie Southgate they were constantly being denied by defensive brilliance. In South Africa our mini-bus taxi’s always have space for more, but the tackling of Jess O’Connor was consistently of the bus is full variety. And although O’Connor got a second goal, but the defender will be almost be more delighted with the tackling on display.

An international indoor hockey clean sheet, a 3-0 series lead and a thrilling performance in front of a packed velodrome sees South Africa in a good place halfway through the series. More of the same? Yes Please.