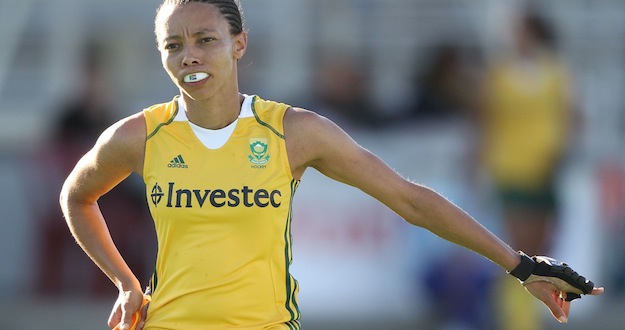 The opening round of the Investec World League semi-finals tournament begins at the University of Westminster in Chiswick, London Saturday and the mood in the camp of co-captain Lenise Marais’ side is a confident one.

The Investec South Africa women’s hockey team leader said the world’s number 11-ranked team are ready to face the challenge of world number four England in a match to be televised live on SuperSport 2 at 8pm SA time.

“We had good match preparation and training in Scotland and we are ready,” said Marais of South Africa’s 2-1 series win in the four Test matches in Edinburgh that finished on Tuesday.

“There were four hard Test matches and we also got in some quality training sessions and are looking forward to the challenge,” added the KZN Coastal Raiders defender.

And Pietie Coetzee, the most successful goalscorer in the history of women’s Test match hockey has, with 10 goals in the four Tests this past week against Scotland, taken her tally to 272 goals in 267 Test matches, yet the Investec South Africa women’s hockey team superstar striker still feels there is room for improvement.

“I am not at my best yet and there are areas I want to improve on,” the 34-year-old Coetzee said Friday.

The SA team are Test-hardened and will need to be on top of their game against an England line-up that features superstar forward Alex Danson, captain and penalty corner exponent Kate Walsh as well as Ashleigh Ball among the big names.

“In the first two stanzas we were put under pressure and that is to be expected against the Olympic silver medallists as it’s a step up from [fusion_builder_container hundred_percent=”yes” overflow=”visible”][fusion_builder_row][fusion_builder_column type=”1_1″ background_position=”left top” background_color=”” border_size=”” border_color=”” border_style=”solid” spacing=”yes” background_image=”” background_repeat=”no-repeat” padding=”” margin_top=”0px” margin_bottom=”0px” class=”” id=”” animation_type=”” animation_speed=”0.3″ animation_direction=”left” hide_on_mobile=”no” center_content=”no” min_height=”none”][world number 19] Scotland and it forced the players to think and act quicker,” said Gregory. “We had a very good third session and scored some very good goals.”

SA physio, the Amsterdam-based Harm Bruyn, said the SA players were peaking at the right time after a tough physical programme at the initial stage of the Scotland leg of the UK tour.

“Pietie was rested for the Argentina training match and the team as a unit will be ready for Saturday, as they have worked hard.”

Scotland coach Gordon Shepherd had positives and negatives about South Africa’s performance in the four-Test series that ended on Tuesday, a series in which 27 goals were scored in the matches at a high average of seven per game.

“I think the high scoring was down to a lot of poor defending on our behalf and probably on the SA side as well,” he said.

Gordon said SA’s strong points were their penalty corners and also the manner in which the forwards were able to benefit from the long balls supplied by their defenders, through the midfielders, whose running lines off the ball carved open the passageway for the pass.

“The forwards did very well throughout the series. Their basic skills were good, but the SA weakness I would say was their PC defence.”

Shepherd also praised the “great form” of attacking midfielder Shelley Russell. “Her pace was used well and I think her skill set has got better since I last saw her. My players also commented on this.” The Scot said that midfielder Tarryn Bright was good at times but felt that SA could use her more.

The Scots, who used 28 players in the series, are preparing for the European Nations Championship, where they have Germany, England and Spain in their group.