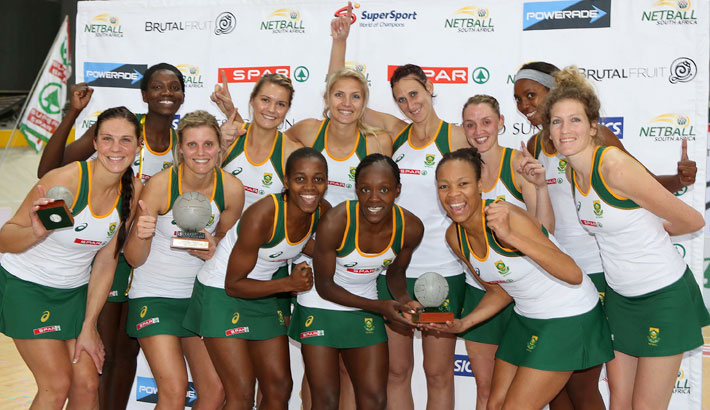 The SPAR Proteas wielded the whitewash brush to good effect as they ran out 46-33 third Test winners over Scotland’s Thistles at the Bellville Velodrome, in Cape Town, on Saturday afternoon.

With earlier 56-29 and 41-25 wins from the first two Tests under their belts, the Proteas will be off to next month’s Commonwealth Games with loads of confidence in their ranks.

Despite the 3-0 series defeat, the Thistles improved with every outing and they provided the Proteas with a great opportunity to work on areas of their game that needed attention.

With the likelihood of a series whitewash at the back of their minds, the Proteas started off nervously and that saw them trail 1-2 after only three minutes play.

This served as a wake-up call for the Proteas who responded with superb intensity as their silky skills came to the fore and in the space of six minutes they halted the Thistles’ charge by running up a 7-4 lead to a rapturous applause from the fans.

As play moved towards the end of the first quarter, the frenetic playing patterns gave way to a more cautious approach on both sides. During this phase of play, Scotland were the more prolific scorers as their moves proved the more penetrative and surprisingly they saw the quarter out in relative comfort with a 11-9 lead.

Another tense start by the Proteas who resumed with two line-up changes made for a slowish fight-back, which needed some three minutes play for them to draw level at 12-all as the local fans roared their delight.

A two-minute time-out midway through this quarter after an injury to Thistles captain Lesley MacDonald gave the two coaches a chance for animated pep talks and when play continued the teams upped the tempo.

This made for action which continued in to-and-from fashion and the scoreboard seesawed as the ferocious action, littered with turn-overs, ahead of the halftime break saw the Proteas regain the lead with a slender 20-19 lead.

This second-quarter display by the Thistles was possibly their best quarter performance and although they surrendered the lead, they still outscored their higher world-ranked opponents by 10 goals to 9.

The Proteas were far more assured and confident under the post when play resumed. It was great reward for vastly improved inter-passing which caused the Thistles to lose their markers.

It also helped the Proteas to play with less anxiety and they made their efforts count as they raced ahead 26-21 with nine minutes play left in this quarter.

The rising score line impacted on the Proteas’ momentum as it gathered pace and the Thistles were left chasing the match.

Their third-quarter superiority in all phases of play saw the Proteas pull away with a massive 10-goal lead at 34-24.

When the final quarter’s play resumed, the Proteas were not allowed to dominate possession as the Thistles managed close down the spaces in the opening minutes.

However, they were never able to cope with the Proteas’ unrelenting pressure although they slowed down the victory march with fierce defence before the South Africans signed off with a 46-33 triumph.