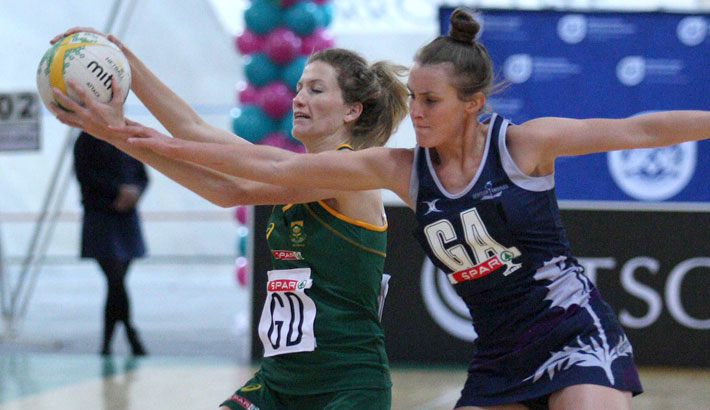 South Africa’s SPAR Proteas made an auspicious start to the three-Test series against Scotland’s Thistles with an emphatic 56-29 win in the first match at the Bellville Velodrome, in Cape Town, on Thursday evening.

The world no. 12th-ranked Scots went into the first Test on the back of several giant-killing feats in recent months, when they recorded wins over higher-ranked teams such as Wales (8), Trinidad & Tobago (10) and Northern Ireland (11).

However, the Proteas’ class proved a tad too much for the Thistles, who were left chasing the game when the halftime break dawned.

At the start, turn-overs and interceptions came thick and fast as both made nervous starts. The Proteas seemed to settle down sooner but the Thistles’ defence stood firm, allowing the visitors to go toe-to-toe with their SA hosts in the opening quarter.

Midway through this passage of the game, the Proteas held a slight 5-4 lead after Scots managed to close down the spaces effectively, by contesting fiercely.

Lesley MacDonald, Scotland captain and most experienced player, suffered an eighth-minute injury and needed first-aid attention. This seemed a cue for the Proteas to step up their game and they closed out the first quarter strongly with a 13-5 advantage.

Chrisna van Zyl thrived from the excellent service, and was responsible for the bulk of the Proteas’ tally with countless scoring shots from all different ranges in the circle.

The Scots started on a promising note with the first goal after the restart, but the Proteas shrugged off the setback with a stream of fast-paced attacks from the flanks, as they stamped their authority on the game.

The Proteas’ defence rose to the occasion with smart interceptions when the Scots looked to claw their way back, as the second quarter wound its course. This helped to boost the confidence in the Proteas’ ranks, and they maintained their shape superbly as they threatened to double their tally.

By the time the halftime whistle sounded the Proteas had advanced the scoreline from 13-5 to 26-12, giving them a massive 14-goal lead.

Both sides made changes during the break and the fresh personnel seemed to take time to fit into their sides’ playing patterns.

However, the Proteas soon wrested the initiative again and as they exerted increasing pressure, unforced errors crept into Scotland’s game, limiting the visitors’ opportunities.

Scotland varied their strategy midway through the third quarter and managed a few goals, although they never threatened the Proteas’ lead.

With Melissa Myburgh, playing off the bench, in devastating form in the circle, the Proteas closed out the third-quarter action strongly to a rapturous applause from the fans with a commanding 40-23 scoreline.

Scotland tried to shore up their defence with a change for the final quarter’s play. The Proteas also brought on fresh legs, and the Scots found the new energy was too hard to contain.

The fourth quarter turned out to be the Proteas’ most prolific passage of play, as they responded with two goals every time Scots managed to breach their defence.

There was no let up by the Proteas at the death, as they rounded off a superb first Test performance with a runaway 56-29 win.

Scottish skipper MacDonald said her team looked like getting their game together in the third quarter but their efforts were punctuated by too many errors.

Maryka Holtzhausen, the Proteas captain, said her side scored a “good” win, but that there were still many aspects of the game they will need to work on ahead of the second Test at Bellville on Friday.

Photo 1 caption: Karla Mostert of South Africa (Left) and Lynsey Gallagher of Scotland compete for the ball during the 1st test match between South Africa and Scotland at Bellville Velodrome on June 19, 2014 in Cape Town, South Africa. Photo: Reg Caldecott

Photo 2 caption: As elegant as she is effective for the SPAR Proteas, Bongiwe Msomi places South Africa in a favoured position against Scotland. Photo: Reg Caldecott

Photo 3 caption: Erin Burger rises above the action for South Africa during the 1st test match at the Bellville Velodrome on Thursday. Photo: Reg Caldecott