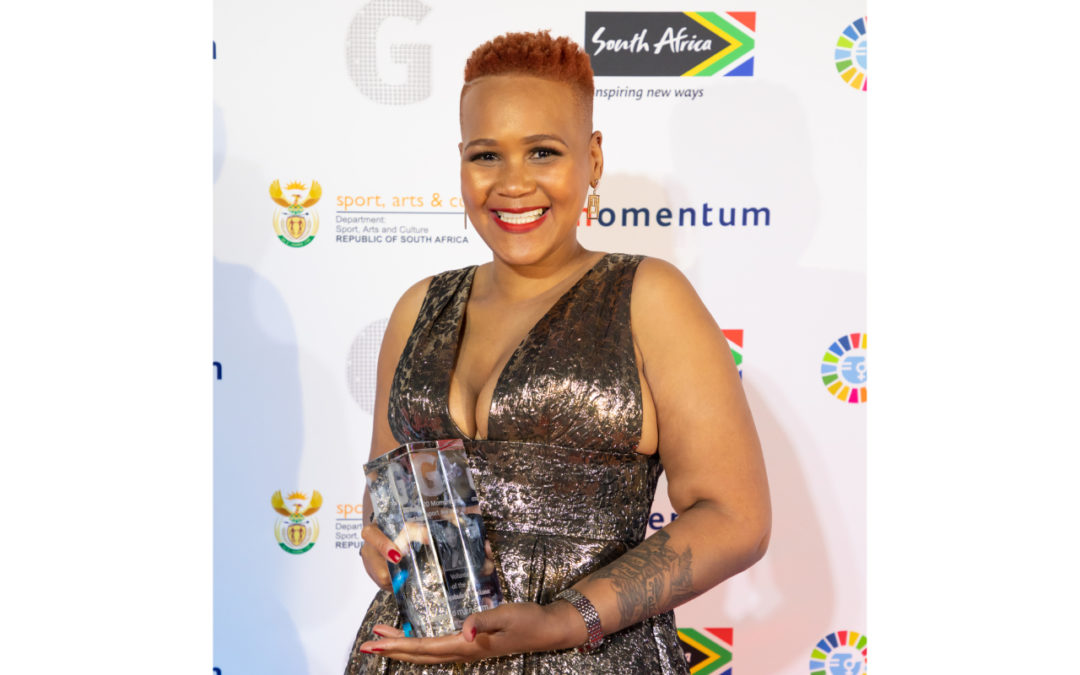 “Volunteering is the most undermined work whilst we do it to fulfill the bigger purpose of curbing the country of the scourge of violence, crime and substance abuse,” reveals 2020 Momentum gsport Awards’ Volunteer of the Year recipient, Siyabulela Loyilane.

It is no secret that volunteers are ultimately the backbone when it comes to the development of sport in the country and their selfness to witness their community members achieve their dreams is unmatched.

Loyilane was recognized at the 15th edition of the longest running women’s sport platform for her incredible work in developing football from players to the supporters.

The Administrator of the National Football Supporters Association’s latest achievement has been the launch of The Football Scouting Bible book which is a project she has been managing for a year.

She also hopes to complete her Masters in Football and Business Management course this year and plans to go out of South Africa to gain more experience in the football industry.

Her journey is on the rise but where did Loyilane develop a passion for sport? Celine Abrahams finds out!

Siya, how has life been for you since winning the Volunteer of the Year Award at 2020 Momentum gsport Awards?

It has been amazingly overwhelming as I am starting to receive more recognition for the work that I do and all the projects that I am involved in.

Did you expect to win the award?

No, I didn’t and to a large extent, I couldn’t even do enough campaigning as I was tied up with the position I had just started with the National Football Supporters Association. It was a welcomed surprise to lift my spirit and also validation that I am moving in the right direction.

How has this recognition inspired you?

“It has inspired me to continue working harder and more so, advancing the agenda of Women in Sports Leadership.” – National Football Supporters Association’s Administrator, Siyabulela Loyilane on winning the Volunteer of the Year Award at #gsport15

It has inspired me to continue working harder and more so, advancing the agenda of Women in Sports Leadership as transformation is lacking.

Where did you develop a passion for sports?

Growing up in the Eastern Cape – Ngxwalane Location – the environment was for Rugby and Cricket as the province is quite big on those sporting codes. Boxing would be third on the list, so I often saw aspiring footballers fall through the system as there was no opportunity for them. I didn’t know what I could do to change the status quo but being surrounded by a mother who was a Disability Rights Activist showed me that it is possible to use your voice to sensitize people and get conversations going. I still didn’t have a plan though because the framework that I was presented with when it came to football showed or rather it wrote you off if you had never played or didn’t have a surname that is born into the sport.

Naturally when I was presented with the opportunity in 2013 to form a club, I took it as my answer to start changing the lives of footballers one person at a time. I may not be there but at least the conversation and the work has started. I am not just changing lives for players now but I am moving to change the narrative of football supporters.

Did you always want to have a career in the sports industry?

I saw myself as a lawyer in which to some extent being involved in advocacy work speaks volumes to the initial career path I wanted to follow.

It takes a lot of courage and determination for one to voluntarily help others to make their dreams a reality. How did you get involved in volunteering?

I have always had a passion for helping out communities I just didn’t know how to do it and football gave me that opportunity. I started with a sanitary towel campaign in 2011 and found that I could do this and take on different projects to effect positive change. Also seeing our young people fall into the trap of societal ills motivated me to want to do something as they say an idle mind is very dangerous.

What are some of the challenges that volunteers face?

I think funding is the main key as at times you have projects to roll out but no funding. Also, volunteering is the most undermined work whilst we do it to fulfil the bigger purpose of curbing the country of the scourge of violence, crime and substance abuse.

How have you been able to overcome these challenges?

“I have learnt to knock on doors, built relations and commanded some level of professionalism.” – Loyilane on overcoming challenges as a volunteer.

I have learnt to knock on doors, built relations and commanded some level of professionalism. It is also important to read so that when you open your mouth to speak, people can listen to what you have to say and actually understand.

What are some of your biggest personal achievements so far?

Winning the Momentum gport Award because it is my first award. My latest achievement is also the launch of The Football Scouting Bible which is a project I have managed for a year and it was good to see the book come to life and going out.

I am inspired by Ntambi Ravele because of the work she has done in sport. She continues to inspire us daily and never backs down from advocating for women in sport. I have followed her journey through Netball SA, Boxing SA amongst others and her recent SASCOC matter.

The tenacity and fight put up by Mme Ria Ledwaba lately also has inspired me and I have been following her for years because she is in the same space as I am as an administrator.

Emy Casalleti Bwalya and Fran Hilton-Smith, both having worked at FIFA level and involved in World Cup events.

Lastly, Mme Manto Madlala, being a Chairlady of a team in the top-flight and holding down her own in the Premier Soccer League. I can only draw lessons from these phenomenal women.

Looking at the state of women’s football in the country, how can we develop the game?

When the National League was launched we had hoped it would improve the state of women’s football in SA, however the fact that it is not a professional league poses as problem as it may seem like you have competition amongst your systems which should be pulling to one direction. The issue of equal pay for women footballers also is key in the pinnacle of this. Other issues that are burning and personally I have seen in men’s football and would often say can we not make the same mistakes for women’s football are the following:

I am hoping to finish my Masters in Football and Business Management this year if I can raise the funds, then go out of SA to gain more experience in the football industry. I would still like to be an integral part of changing in how a football supporter is seen and valued in the country. Lastly, continue to grow the Shumba Football Development brand to cater for both the boy and girl child in SA.