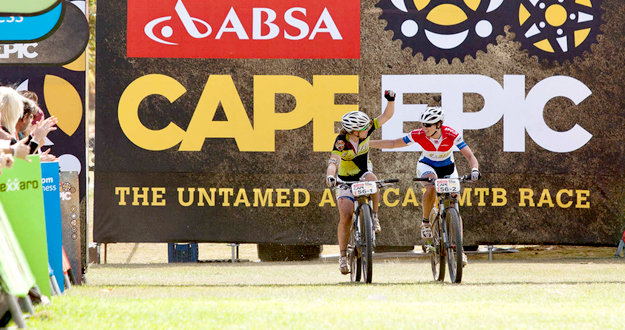 C-Bear’s Sara Mertens and Laura Turpijn won the Absa Cape Epic penultimate stage in 6:05.45,9 for a race overall time of 37:52.15,6, for their best finish of four podium finishes of this year’s event, after race leader’s Yolande Speedy took a painful tumble, with her continued pursuit of the 2013 title with Energas team-mate Catherine Williamson in doubt.

Says Turpijn of C-Bear: “We never expected to win a stage or even to be second or third. Today was hard but I’m so proud of Sara. She kept on pushing. It was good and I’m really happy.”

Williamson (Energas) says: “Yolande crashed today and really hurt herself. We’re hoping it’s only muscular. We were actually quite cautious today, but she hit a stone. It was before the second water point.

“I had a funny feeling about today,” continued Williamson. “She couldn’t ride any of the single-track. She’s strong as an ox on the climbs. I’ll carry her tomorrow, if she hasn’t broken anything.” Adds Speedy: “We were going so well today, until I hit a rock. Hopefully I can still finish tomorrow and nothing is broken. I’m just very grateful to Catherine for pulling me through today.”

With a maximum stage time of 10 hours, riders had to prepare themselves for a long stage, the last real hurdle of the 2013 Absa Cape Epic. The first 20 kilometers were primarily in the forestry plantation on the slopes of Du Toit’s Kloof, with a steady 10-kilometer climb followed by an equally long, fast descent interrupted occasionally by some soft forest single-track.

The second major climb was primarily through orchards that soon gave way to mountain fynbos as the trails turned more rugged, including another single-track descent, but riders had to watch out for the handle-bar-grabbing fynbos.

By the time riders crossed under the N1 national highway at the 35-kilometer mark, they completed almost half the climbing of the day. The next section was fast going along farm and gravel roads along the Drakenstein Mountains towards Franschhoek.

The route made the turn towards Helshoogte Pass, as the trail hugged the steep slopes of the iconic Simonsberg Mountain. Riders passed through wine farms and the Idas Valley before passing underneath the R310 road. From here it was one last steep climb, before a descent sweetened by some more forestry single-track that took riders into the race village.

Erik and Ariane Kleinhans (RE:CM) lead this category by 2 hours, 7 minutes and 21 seconds. Says Erik Kleinhans: “It was an incredible route. It was really nice and we’re very happy to finish first in Stellenbosch, our home town. We had so much support along the way.”

Adds Ariane Kleinhans: “I felt really strong today. Of course we had some extra motivation coming home to Stellenbosch. We only have one stage to go and tomorrow will be very hard, but we’ve done most of it. There are so many mountain bikers in Stellenbosch and it’s so nice to see the whole family here.”

The final stage of the 2013 Absa Cape Epic is short, with only one major climb at the halfway mark. Riders will leave Stellenbosch along the mountainside through Coetzenberg and Eden Forest, then work their way into the Stellenbosch Winelands.

The trail climbs up through the vineyards, opening up spectacular views of False Bay, as far as Cape Point, and back to Table Mountain and Durbanville, where the journey started seven long days ago.

Having mastered the nine-kilometer climb up the side of the Helderberg Mountain into the Lourensford Neck, the finish line is almost within sight as the view into the striking Lourensford bowl opens up.

This is the first time in Absa Cape Epic history that riders approach Lourensford Wine Estate from a totally different direction and not Gamtouw Pass.

The final 25 kilometers are predominantly downhill, on forestry roads on the higher elevations, interspersed with some single-track, and into the orchards and vineyards on the lower slopes.

The final run onto the lush green polo field packed with grandstands, marquees and supporters promises to be unforgettable.